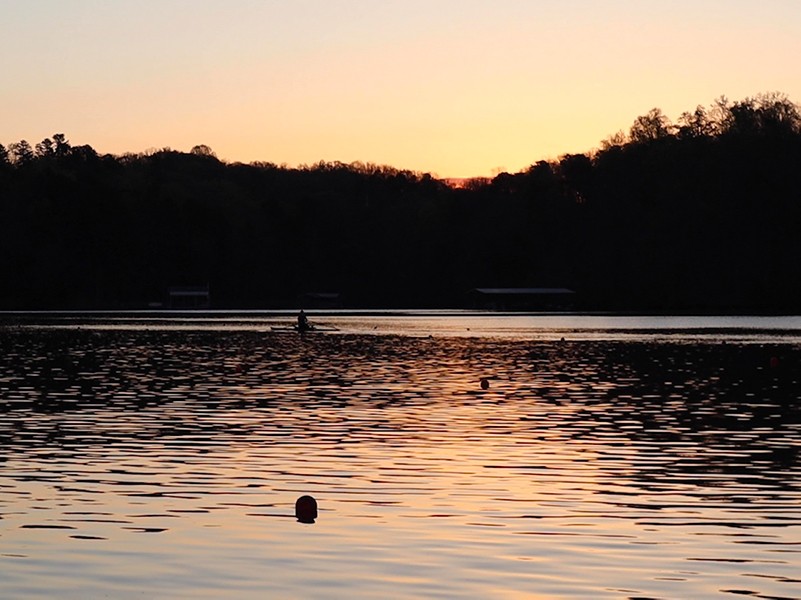 Rowers with the Green Racing Project train each morning around 7 a.m.
Contact Editor

Most people don’t like the idea of working out, much less working out before sunrise.

But for a group of athletes with the Green Racing Project, their 7 a.m. training session is just part of the journey that hopefully leads to the Olympics.

"The ultimate goal is to represent the United States at the Paris Olympics in 2024," said athlete Ezra Carlson. "The journey there changes a lot throughout the process."

Carlson is one of the Green Racing Project’s 13 rowers that have been training this week at Lake Lanier Olympic Park.

Head Coach Hap Whelpley said the park’s facilities, as well as its history serving as a venue for the 1996 Olympics, make it a perfect place for training.

"The real impact for us is having a 2,000 meter bouyed course...you can count the number of those in the country," said Whelpley. "And to have one with the infrastructure that still remains from the 1996 Olympicsn [like] finish line tower, you can feel the presence of that as you come down the last 500 meters of the course, and that's a huge help to us."

Athletes with the Green Racing Project have graduated college and are looking to continue their rowing career at the next level. GRP, as it is referred to by the athletes and coaches, is based in Craftsbury, Vermont.

Whelpley explained the "green" portion of the group's name refers to their commitment to minimize their carbon footprint as they travel.

For several months out of the year, the team travels together to different venues for training and competes at qualifying races with the goal of either making the U.S. National Team or qualifying for the Olympics.

That means at least one morning training session on the water, sometimes more if it’s a nice day or a big competition is coming up.

"It's a combination of getting fitter, like physically, and also working on technique," said Schodorf. "It's kind of delicate balance working on your fitness, but also paying a lot of attention to technical things that you want to get better at."

There are two different types of rowing: skulling and sweep rowing. The easiest way to remember the difference is each person has two oars in skulling, while each person only has one oar in sweep rowing. GRP trains athletes to do both.

GRP athletes also compete single and double, meaning sometimes they row alone and other times they have a partner.

The group trains together each morning, with the coaches on motorboats nearby to time and provide feedback as they go.

"A big part of our practice as a coach in the sport of rowing is to actively provide them with live feedback as they're rowing, so we'll use megaphones or we just yell sometimes to try and let them know things we observe from the motorboat that hopefully they can put into use as they're rowing," said Whelpley.

The group’s next race is the National Selection Regatta at Princeton in May. Whelpley said they will likely train at Olympic Park until the end of this week.