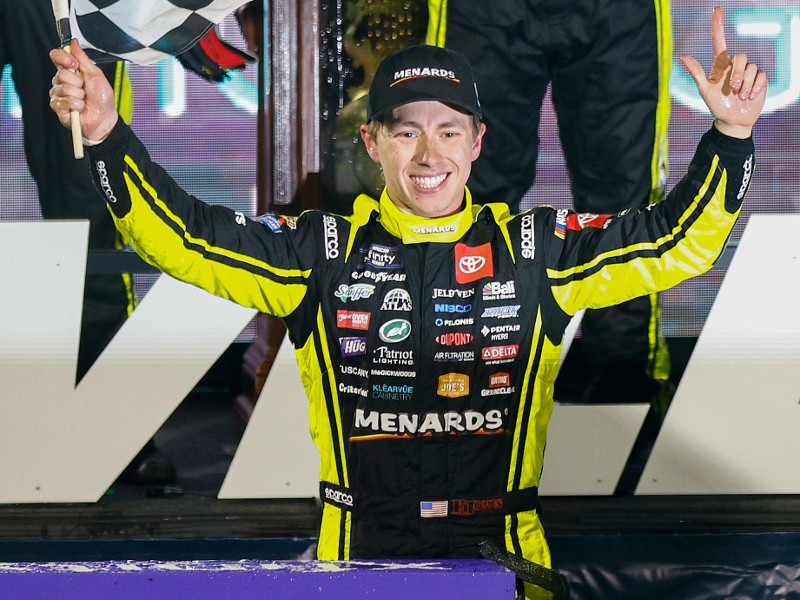 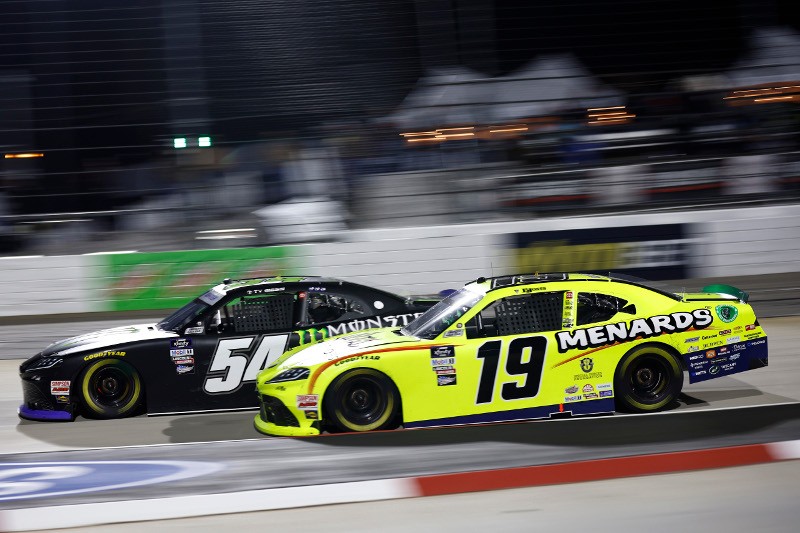 MARTINSVILE, Va. – On older tires, Brandon Jones stole an Xfinity Series win from the scion of the owner of his race team on Saturday night at Martinsville Speedway.

Jones dived to the inside of Joe Gibbs Racing teammate Ty Gibbs as the race went to a second overtime. Jones cleared Gibbs on the second circuit (lap 261) and got to the finish line .677 seconds ahead of Landon Cassill, as Sam Mayer bumped Gibbs’s Toyota and squeezed it into the outside wall off the final corner.

While Mayer and Gibbs tangled, A.J. Allmendinger took third and the $100,000 Xfinity Dash 4 Cash bonus that goes to the highest finisher among four eligible drivers, a group that also included Mayer and Gibbs.

Gibbs led 198 of the 261 laps in a race that was scheduled for 250. Jones led 28. But Gibbs was too busy fighting Mayer on pit road after the race to worry about the lap count.

While Jones was performing a celebratory burnout on the frontstretch, Gibbs strode to Mayer’s car, and heated words soon led to punches — Mayer with helmet off, Gibbs with helmet still on.

“I tried to talk to him, and he got in my face, and that’s when I had to start fighting,” Gibbs said.

“The only thing I’m mad about is that he (Mayer) wasn’t going to get by the 16 (Allmendinger), and I got hit in the left rear. It’s just frustrating, but I was on the other side of it last week (moving John Hunter Nemechek for a win at Richmond), so that’s just part of it.”

The dust-up on pit road did nothing to dampen the elation of Jones, who picked up his first Xfinity Series win since 2020 and the fifth of his career.

If Gibbs was hot, in another figurative sense, Mayer was unapologetic after the incident, which left him with a swollen left eye.

Long before the chaotic ending, the race got off to a rocky start. Rain began falling right after the command was given to start engines and the green flag was delayed until a small storm cell left the area.

And before the field could complete a lap, the engine in Brennan Poole’s No. 47 Chevrolet exploded, sending a plume of smoke into the cool night air and dropping a trail of oil on the track.

The smoke was an appropriate metaphor. For the rest of Stage 1, Gibbs smoked the rest of the field, leading 59 of the 60 laps.

By pitting early under caution on lap 42, Noah Gragson inherited the lead when Gibbs brought his No. 54 Toyota to pit road at the Stage 1 conclusion, but it didn’t take Gibbs long to prevail on new tires.

On lap 88, the 19-year-old Gibbs passed Gragson for the top spot and began to pull away until Stefan Parsons’ spin in Turn 2 on Lap 101 caused the fifth caution.

Undeterred, Gibbs maintained his advantage, but the restart on lap 108 gave Jones the opportunity to slip past Gragson for second. Gibbs elected to pit under caution on lap 117 after contact from Anthony Alfredo’s Chevrolet turned the Toyota of Derek Griffith in turn 1, causing the sixth caution.

That handed the stage win to Jones, who surrendered the lead to Parsons — with Gibbs running fourth — by pitting during the stage break, along with other drivers who had stayed out to collect stage points.

It took Gibbs fewer than two circuits to regain the lead after a restart on lap 129. But at that point, barely past halfway, there were still nine cautions, two overtimes and a fistfight to go.

Gragson’s winning chances would evaporate in a wild multicar wreck that stopped the first attempt at overtime almost before it started.