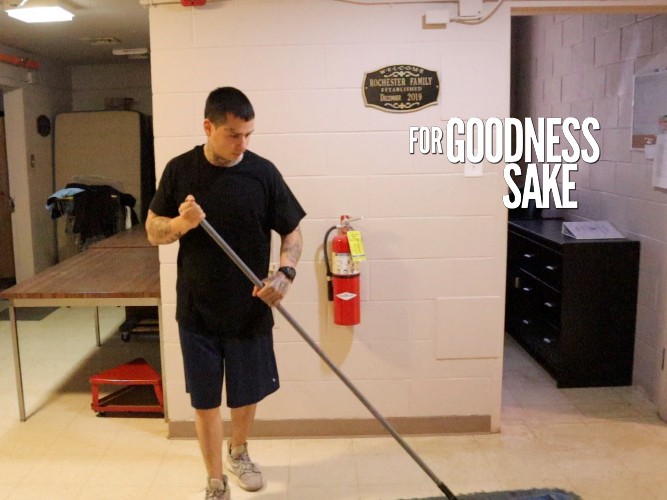 A resident at North Georgia Works! cleans the floors, one of the daily chores for residents.
Contact Editor

As a result of their life choices, many men in the Gainesville-Hall County community do not have a job and live in homeless camps. Some do not even know where their next meal is coming from.

North Georgia Works! presents an opportunity to help these men turn their life around- if they are willing to make a change.

“We've had some men who were on the streets, dumpster diving, living off of handouts, who chose on their own because they knew they were at the end of their rope. To go 30 days with people checking them off to make sure that they were clean, so that they would come into this program. And they felt like they had really achieved something before they even got here, because they'd stayed clean for 30 days.”

North Georgia Works! is a Gainesville nonprofit helping homeless men go to a full-time job and a roof over their heads.

The nonprofit’s Gainesville headquarters is an old Regional Youth Detention Center converted into an office space, common area, and 30 individual dormitories for the men enrolled in the NGW program.

Men are recommended for the program through one of four portals. These portals consist of other nonprofits, shelters, the jails, and the court system.

This year-long program starts with a 30-day membership in the Blue Crew, named for the blue shirts this group of men wear while out working in the community.

The Blue Crew is used as time to get a man healthy, locate any documentation they may be missing, and get them used to working again.

"They’re a crew of men together in blue shirts that are doing this, understanding what work is, [and] reinstituting work into their mindset when they first come here to North Georgia Works!" said Hanson.

Once a man finishes his time on the Blue Crew, he moves into the next phase of the program; he is matched with one of NGW's 40 business partners for a full-time job.

"These men come in here with some skill levels that we never knew that they had," said Hanson. "Some are great painters, some are outstanding welders, others are diesel mechanics...they just made bad choices, and we're here to help them make a better choice with each day of their life."

Some of NGW's business partners include Syfan Logistics, CF Industries, Oakwood Tire, and the Arts Council.

North Georgia Works! provides transportation for the men to get to work, pays for workman’s comp, and conducts drug screenings each day so the business partners know each man is drug free.

In addition to honing their skills and finding a new purpose in life, each man is paid with a stipend that goes into a checking account set up for them through Peach State Bank.

Money is also put into a savings account established for them, which they cannot touch until after graduating from the program one year later.

North Georgia Works! has changed the lives of many men in the Gainesville-Hall County community. Travis Daniel is an example- he said he was staying at the Salvation Army one year ago.

As of this report, Daniel has graduated from the NGW program and has a full-time job at Oakwood Tire.

"They gave me a job [and] they help me save money...they feed me pretty well, so I can't complain about that," said Daniel. "And sociability, you know, and teach me classes on how to better my life skills."

The nonprofit is a manifestation of the vision Hanson had over 5 years ago. Realizing the number of homeless men in the community and the disproportionate amount of available jobs, Hanson rented buses twice to take community members to a Georgia Works! graduation in Atlanta.

After hearing testimony from the graduates, community members and nonprofits like the North Georgia Community Foundation supported Hanson’s vision to have a similar organization in Gainesville. As a result, North Georgia Works! was founded in 2017.

A man of strong faith, Hanson said he added the spiritual component to the program. It was a small change from the model organization Georgia Works.

"I added the Christ component that wasn't there in Atlanta, but I knew that Jesus was the answer," said Hanson. "And I knew that they had to have this spiritual enlightenment when they were in here."

To hear him talk about it now, there is no doubt Hanson loves each man who walks through the doors of North Georgia Works.

"They see me maybe as a granddaddy they never had," said Hanson. "And I stand ready to give them all the hugs and all the encouragement they need, that their granddad I'm sure would have done had he been around."