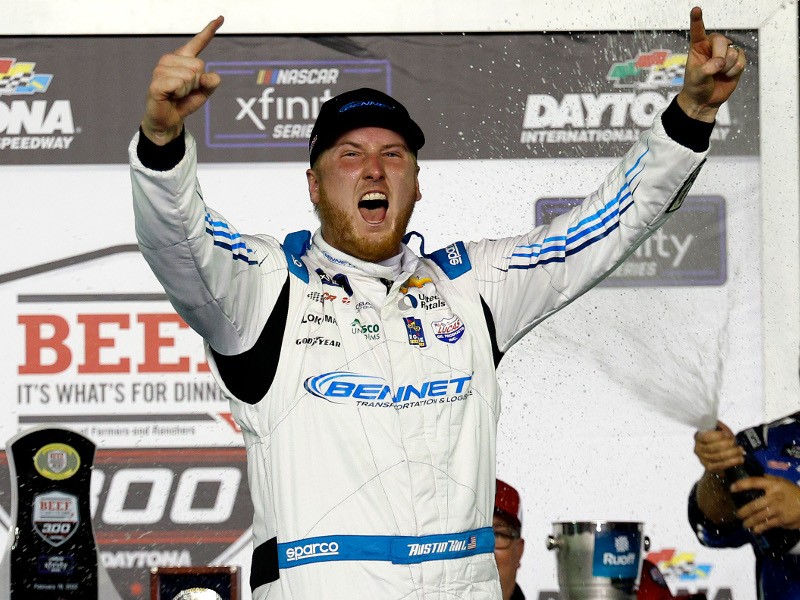 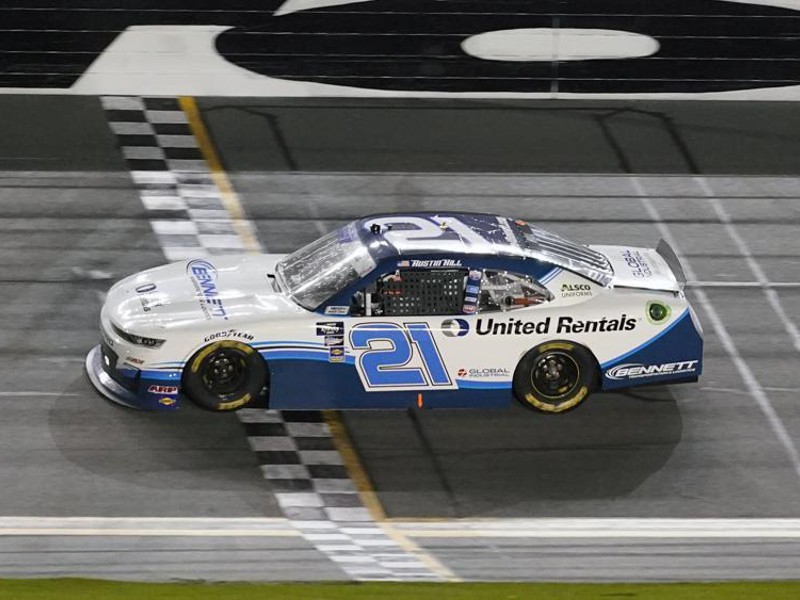 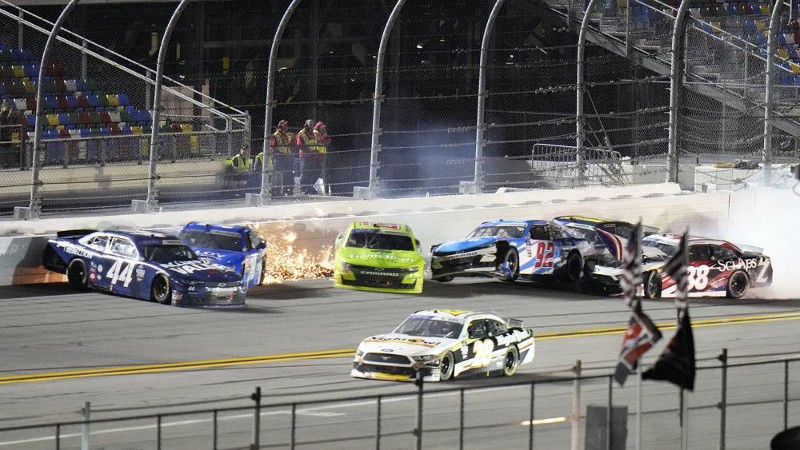 Austin Hill scored the biggest win of his career on Saturday night.

The Winston, Georgia driver was battling with veteran A.J. Allmendinger with half a lap to go in the NASCAR Xfinity Series season opener at Daytona International Raceway. Behind them, a grinding crash sent Myatt Snider’s car tumbling through the air, bringing out the caution.

Hill had just moved ahead of Allmendinger when the caution came out, ending the race and sending Hill to his first series victory.

The win comes in his first start for Richard Childress Racing as he prepares to contend for the series title for the first time in his career.

“We timed it perfectly. Obviously that caution came out but we had a heck of a run, so who knows what would have happened there.”

The race ending crash occurred when Anthony Alfredo made contact with Snider’s Chevy as the pack raced down the backstretch. That turned Snider’s car around in front of the car of Jade Buford. That contact sent Snider’s car then tumbling through the air and making hard contact with the catch fence.

Snider’s car saw both the rear axel and engine ripped free by the fence as it tumbled in a shower of sparks and flames. Fortunately, Snider walked away from the destroyed car under his own power. He was treated and released from the infield care center. Eight other cars were also gathered up in the shunt.

The crash was severe enough that it tore out a section of the catch fencing on the backstretch, which will have to be replaced overnight before Sunday’s running of the NASCAR Cup Series Daytona 500.

Meanwhile, Hill took the checkered flag under caution to score his first win in his 16th career start.

“I was able to drag back, 98 (Riley Herbst) gave me a heck of a push, we were able to get by him, and this is so crazy,” Hill said. “I won it back in 2019 (in the NASCAR Camping World Truck Series) with a new team, now we’re with RCR, first race with them. We were able to get the job done.”

Hill was in the mix all race long, battling at times with Kaulig Racing teammates Daniel Hemric and Allmendinger for the race lead.

After a caution on lap 14 for a crash between Atlanta, Georgia’s Drew Dollar and Jeremy Clements on the backstretch, the race ran mostly incident free until lap 84, when the car of Sam Mayer lost the back bumper cover off his Chevrolet.

Hemric flat spotted a tire and received damage while trying to avoid the debris, sending him to pit road for repairs.

Hill took control of the race on the restart, but a multi-car crash on the next lap would end the hopes of one of his strongest competitors.

The crash occurred coming off turn four, when C.J. McLaughlin lost control, spinning back up into the pack and triggering a melee that involved Hemric, Jeffery Earnhardt, Brett Moffitt, Shane Lee, Tommy Joe Martins, Joey Gase and Kyle Weatherman, among others.

Hemric, who started from the pole and led 38 laps – the most on the night – soldiered home to a 28th place finish.

Back under green, Hill again moved to the lead, with Noah Gragson and Allmendinger in tow. Allmendinger would move to second on lap 101, and challenged for the lead one lap later. After battling back and forth for several laps, he moved back to the point on lap 106 as the field settled into single file formation behind him.

With two laps to go, Gragson tried to challenge for the lead, but Allmendinger held the spot with a push from Hill. After taking the white flag, Hill got a run on the leader coming off of turn two, and had pulled ahead just seconds before the race ending crash occurred behind the leaders.

“Man, I’m speechless,” said Hill. “Andy Street, Richard Childress, just all these guys back at RCR for believing in me. It’s been a fun off-season, and now we get to go race for a championship.”

Allmendinger had to settle for second in as many races at Daytona.

“Kind of kept trying to block both lanes, and it looked like Austin (Hill) moved up there and timed it perfect where he just got a massive shove, and I probably could have tried to really block, but I think I probably would have wrecked us if I would have done it,” said Allmendinger.

Gragson followed in third, with Herbst in fourth and Justin Allgaier in fifth.