Football: Pender settles in at North Hall, looks to 'build' on success

By Jeff Hart | Photos and Video by Seth Chapman 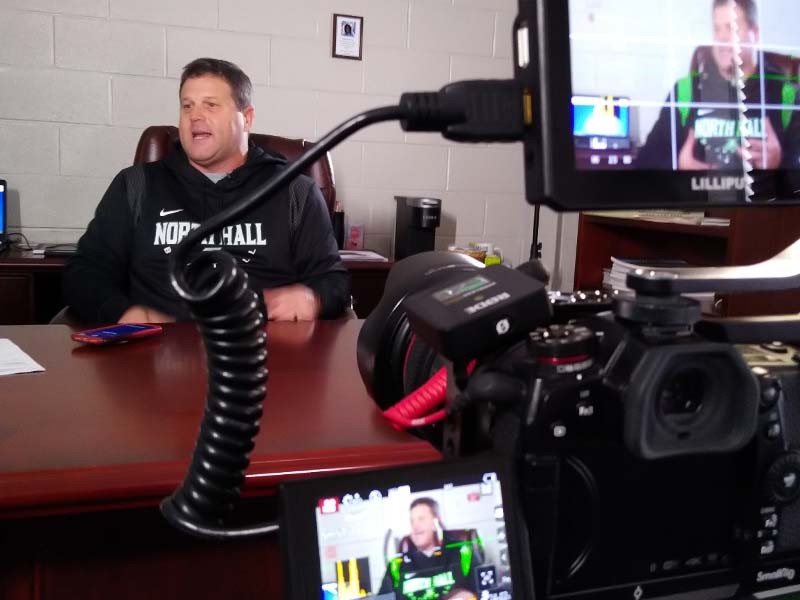 GAINESVILLE — For years, Sean Pender would wander up into the north Georgia mountains and have a sense of belonging.

The former Brunswick head football coach, and now the man that will head up the North Hall program, will get to see if that feeling is long-lasting.

Pender was announced as the Trojans' next coach back on Jan. 21 but officially started his job on Monday.

“My wife and I always talked about trying to find a place between the mountains and the lake and this opportunity came up,” Pender said. “Driving up to the school, it was just a beautiful spot, and the school itself is in a beautiful spot. After talking to (North Hall Athletic Director) Sam (Borg) and Principal (Billy) Wells, it just seemed a great fit. But the cherry on top was that the facilities are really, really nice.”

Pender will have a challenge on his hands as the Trojans, who finished 6-5 and lost in the first round of the Class 3A playoffs in 2021, graduated most of their offensive production, including the entire offensive line, and two-year starter at quarterback, Bradford Puryear.

Even more so, Pender, who played at Valdosta State during the days of the Hal Mumme ‘Air Raid’ offense, has adopted the spread approach during his 20 years of coaching.

Pender started at Brantley County in 2002 and spent eight seasons, going 35-46 with one playoff appearance. He left for Pierce County in 2009, where he had his most successful run, including coaching Georgia quarterback Stetson Bennett. He was 54-18 in six seasons, with six straight playoff berths, including two second rounds and two quarterfinals.

Last season, Pender and the Pirates used a dual-quarterback system and passed for 1,613 yards passing. However, the rushing attack yielded one 1,000-yard rusher and 2,613 total yards on the ground. The offense averaged 36.8 points per game.

“I like the spread and the RPO options it gives you. I like to attack,” he said. “But in my 20 years, I’ve learned that you have to adapt and things evolve. This program has been successful for many years. It’s not broken by any stretch.

“We will adapt, but my philosophy will not change. Some of the things we do in the run game are very similar to the wing-T. We need to get the ball in the end zone as fast as we can and as many times as we can.”

Pender referenced North Hall’s success in other sports and activities as a reason he thinks the program can move to the next level, in time.

“I’m still getting to know a lot of the kids and what exactly we have coming back. But what I do know is that when you look at North Hall’s athletic program, they’ve won state titles in cross country, baseball, wrestling, One-Act Play, so they have that type of mentality here to get to that level. Our goal is to keep that championship mindset and raise the bar on the football program.

“It is already a good program. Bob Christmas and David Bishop did a really good job. This isn’t a program that’s broken. We’re just going to try a little different philosophy and see if we can advance it.”

Fans will get their first look at the new Pender changes during Spring practice in May. Their first official action will be Aug. 12 in a scrimmage against Flowery Branch. They open the season a week later on the 19th on the road against rival White County. Their first home game will be on Sept. 2 against Dawson County.