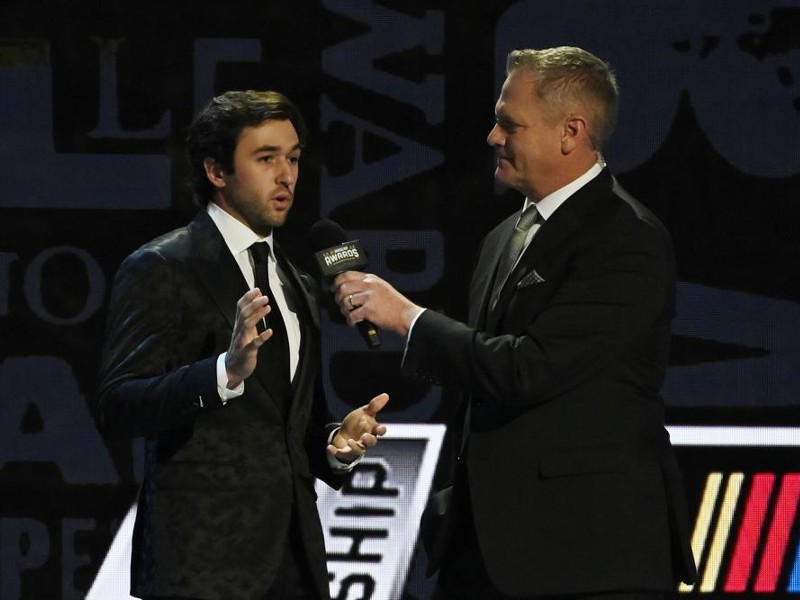 NASHVILLE, Tenn. (AP) — Chase Elliott simply can't be beat when it comes to his grip on NASCAR 's title as fans most popular driver.

Not even with a late social media push by Ryan Blaney to end Elliott's reign.

In a season in which he won five races and finished fourth overall, Elliott added another victory Thursday night. At the season-ending awards ceremony at the Music City Center, the National Press Association declared the Dawsonville, Georgia racer the winner of the fan-decided most popular award for a fifth consecutive year.

Elliott had a message for Blaney, who surprised him by campaigning for the award on social media. Blaney also had fun with Elliott, whose tweets featured videos that included accusing the driver sponsored by Hooters of thinking parmesan garlic chicken wings are “too spicy.”

“I got a pretty good laugh,” Elliott told Blaney during the awards show. “But if you need a trophy or need to borrow it, you know where my room’s at.”

Elliott's run as NASCAR’s most popular driver started in 2018, the first year of Dale Earnhardt, Jr.’s retirement. Earnhardt had won the most popular award every year since 2003, the season Bill Elliot, the man known as “Awesome Bill From Dawsonville” in Georgia, asked for his name to be removed from the ballot after winning 16 times.

Now his son is continuing the tradition with this latest victory, meaning either an Elliott or Earnhardt has won the Most Popular Driver award for 32 straight years. Chase Elliott said he understands and appreciates fans continuing a family tradition of rooting for an Elliott.

“Dad had a great connection with the fans and beyond him, I look at the connection as really an extension of his career and my uncles and my grandfather and just kind of the path and the work ethic that they had to, to be able to get to where they did and to achieve the goals they did,” Chase Elliott said.

Chase Elliott held off his three rivals for the Cup championship even if he lost on the track to eventual Cup champ Joey Logano. Ross Chastain and Christopher Bell also were among the top 10 vote-getters. Others receiving votes included Blaney, Alex Bowman, Kyle Busch, Kevin Harvick, Kyle Larson and Martin Truex, Jr.

The most popular driver award was first presented in 1949, to Curtis Turner, at the end of NASCAR’s inaugural season. The award has been administered by the NMPA and presented annually by the organization since 1983, and it is the only major NASCAR award determined solely by a fan vote.