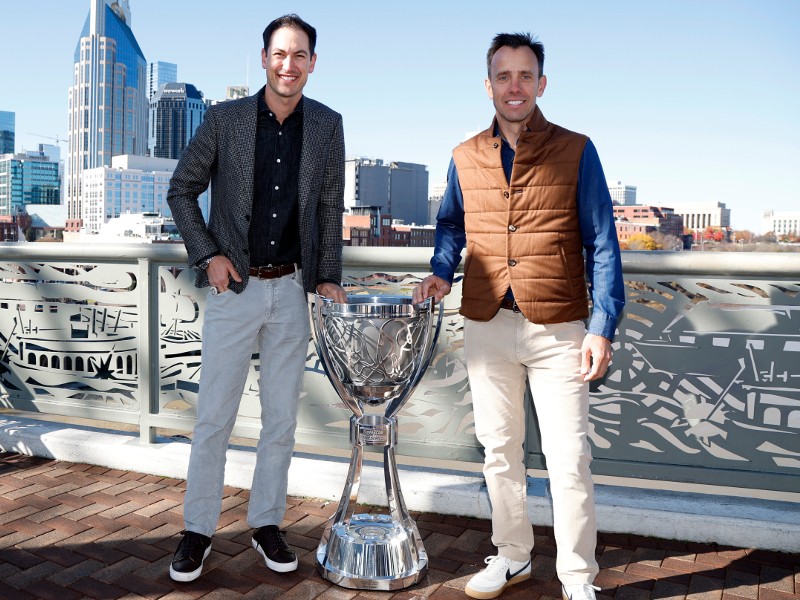 Among the things Logano said he was most looking forward to as champion was the chance to both read and contribute again to the “Champion’s Diary” – a private record of handwritten notes passed on yearly from one NASCAR Cup Series champion to the next. It’s a tightly-guarded tradition and one that Logano – now a two-time series champion – wishes had started decades ago.

“I can’t wait to read it again,” Logano said with a smile.

“Some are kind of quick and simple, but it’s very interesting to read it and it’s cool because it’s a real secret. It’s kind of like an unwritten rule, you can’t take pictures of it and post it. It’s a thing that only the championship drivers know and have read and seen and heard the stories. It’s a cool thing.

“Every time I get it, I’m so nervous. I’m like, don’t spill anything on this. Don’t lose it. It would suck to be the guy who loses the book. It would really be bad. I get nervous, I put it in the safe right away. I won’t see this for a year, that’s what I do.”

As of Thursday morning, Logano had not received the book yet from 2021 series champion Kyle Larson, who conceded last week, that he had not crafted his message to Logano quite yet. Kevin Harvick, the 2014 series champion, smiled when asked about the tradition, saying he’s glad the champions have not shared details of the various messages inside the book.

The tradition began when 2010 champ Jimmie Johnson, now a seven-time NASCAR Cup Series champion, first left a message for 2011 champion Tony Stewart. Stewart passed along words for 2012 champion Brad Keselowski and so on and so forth ever since.

“It’s a congratulatory message from one champion to the next, it’s kind of that passing the torch of ‘great work this year, great job,’ two-time series champion Kyle Busch said, recalling specifically the message he left for 2020 champion Chase Elliott.

Kyle Busch Wants To Be The NASCAR Version Of Tom Brady

After a year that can be described conservatively as tumultuous, two-time NASCAR Cup Series champion Kyle Busch is ready to take the next step in his career.

Busch is leaving Joe Gibbs Racing, where he spent 15 full seasons, to drive a Chevrolet for Richard Childress Racing.

“It’s obviously been a challenging… not just this year, but the last little while… so it’s kind of maybe a blessing in disguise,” said Busch, who explored various options for 2023 after his sponsor, M&M’s, declined to return to the No. 18 JGR Toyota after this year. “Honestly, it just might be time for a fresh start — something new and something different.

“I’m kind of looking at it as the Tom Brady/Peyton Manning aspect, where they left great teams, great organizations where they won championships, and they went on to win championships somewhere else.”

Busch arrived at his Champion’s Week question-and-answer session at the Music City Center wearing the championship rings he won in 2015 and 2019, one on each hand.

“Again, I’m going to go back to the Brady/Manning theory where, yes, I’ve done it before at one place. I want to do it again somewhere else.”

Even in the immediate moments after Ross Chastain finished out the 2022 championship finale – finishing runner-up to new NASCAR Cup Series champ Joey Logano in the race – the 29-year-old Floridian insisted he was absolutely thrilled with the season.

Chastain earned his first two career NASCAR Cup Series victories at Circuit of The Americas and Talladega Superspeedway and was a legitimate championship threat the entire season from Daytona to Phoenix.

And, when he had to do something drastic to earn one of only four championship berths in the Phoenix title race, Chastain performed a move on the last half of the last lap at Martinsville Speedway to take that position. Still needing to make up positions on the final lap, he turned his Chevy into the outside wall and floored it – riding the wall and passing five cars to earn the final Playoff transfer position by a single-point over veteran Denny Hamlin and setting a track record in his wake.

Although Logano dominated the season finale en route to his second series title, Chastain secured career-highs in wins (2), top-fives (15) and top-10s (21). He led 692 laps in 2022 after leading only 76 laps in his previous five years racing in the series.

It all made for quite the “Cinderella story” for a young driver in his first year with a competitive team in NASCAR’s premier series – a racer from tiny Alva, Florida where his family operates a watermelon farm starring on the world stage.

Yet, Chastain said with a smile Thursday, his return home to his Florida farm property in the weeks immediately after the season was a lot less glamorous than many would have expected. He acknowledged, however, his work in 2022 raised the interest level of those he grew up with and has absolutely gained a lot of fans thanks to his performance all season and certainly with his “Martinsville Miracle.”

Chastain was with his younger brother Chad Chastain at a race recently – helping work on the car and then spotting for Chad during the race. He said he appreciated the number of people approaching him for attaboys and handshakes even if he had to remind them, he was working the race. He still hasn’t had a chance to read or even answer all the texts he’s received post-Martinsville.

Back at home in rural southwestern Florida, however, Chastain is afforded the chance to relax and take it all in.

“It’s just home so people that I know were just like, great season, let’s go to lunch,” Chastain recalled with a smile. “Nothing too crazy. They want to talk about Martinsville and talk a little about the win at COTA and Talladega, but pretty normal. It’s the most normal of any place I go.”

Eleventh-Hour Dramatics May Have Hurt Christopher Bell In Season Finale

With two victories in must-win situations in the 2022 NASCAR Cup Series Playoffs, Christopher Bell stole his share of headlines and earned a spot in the Championship 4.

But his last-minute heroics — particularly in the Round of 8 elimination race at Martinsville Speedway — may have Bell at a disadvantage compared with series champion Joey Logano, who won the first Round of 8 race at Las Vegas Motor Speedway and had two extra weeks to prepare for the Championship Race at Phoenix.

“That’s very interesting, because I had the exact same circumstances in my two Xfinity years,” said Bell, who competed for the NASCAR Xfinity Series title in 2018 and 2019. “My first year I didn’t make it till the last race at Phoenix, and then in my second year, I won the first race at Texas.

“It definitely changes your mind-set and your preparation for the event. Joey had multiple weeks to prepare for that event (the season finale). The car, I’m assuming, was sitting there getting all the Phoenix tune-up on it, where our car… I don’t know… I definitely did not think it was a disadvantage for him to be able to focus on that for a number of weeks.”

Winning at Martinsville, however, had its own rewards for Bell — not the least of which is the grandfather clock trophy that goes with the victory.

“The house that I live in, we’ve just tried to keep my special trophies there, and the Martinsville clock is one that got to (be there),” Bell said.

After two enjoyable weeks in the off-season, Ryan Blaney was eager to return to racing. Because he’s not scheduled for any offseason testing, however, the driver of the No. 12 Team Penske Ford won’t be back in his car until February.

That doesn’t mean Blaney can’t work on ways to improve from a season where he qualified for the NASCAR Cup Series Playoffs on points and finished eighth in the final standings.

“I make a list at the end of the year,” Blaney said. “OK, what did we do well? What did we struggle with? And like what are your goals to get better? What do you really want to improve?

“Me and (crew chief) Jonathan (Hassler) sat down last week and went through our list of notes, and like where do we want to get better and improve at, and what did we do well and can still build off of?

“That stuff to me is always really helpful. You look back on the year, and you’re like, ‘Well, we screwed up in this situation. Let’s jot that down and let’s try to figure out a different way. If that comes up again, let’s change it.’”

One race Blaney would like to change is the season-opening Daytona 500, where he had a chance to win on the last lap but finished fourth as rookie teammate Austin Cindric took the checkered flag.

“The one that stings the most is the 500, because we’ve been so close to that that thing for years,” Blaney said. “That one stings the most, but I try to get over that stuff really quick.”

He calmly asked reporters to focus on the racing topic, saying he did not feel comfortable yet responding to questions about the tragic loss of his father, Joe Gibbs Racing Vice Chairman Coy Gibbs, who passed away in his sleep in Phoenix at the age of 49 after Ty’s impressive championship trophy hoist there just hours earlier.

“I’ve been doing good, thank you for asking, definitely appreciate you guys,” Gibbs said addressing the subject immediately. “Right now I’m not going to touch on that subject at all, just going to stick with the racing questions.”

Gibbs said he had been absolutely committed to coming to Nashville to celebrate his and the team’s achievement. Only two weeks ago, the JGR team – owned by his grandfather, NASCAR Hall of Famer Joe Gibbs – formally announced that Gibbs will drive the No. 54 Toyota in the NASCAR Cup Series fulltime in 2023.

“Definitely going to be fun,” said Gibbs, speaking with the media for the first time since his championship press conference on November 5. He said he’s devoted a lot of time to learning the NASCAR Cup Series car on the SIM and feels the 15 races he got to compete in during 2022 filling in for the injured Kurt Busch in the 23XI Racing Toyota will be a substantial boost to his rookie season next year.

“Definitely a huge benefit for sure,” Gibbs said. “I’m very thankful to be put in that opportunity. Again, thank you to (team co-owners) Denny (Hamlin) and Michael (Jordan) for the opportunity. It was really cool.

Of the unexpected chance to get some seat time in the Cup car in advance of is move up to the series, Gibbs said, “Going back and forth and double-duty and racing for the championship in one series, it was a lot, but I did feel like I got comfortable with it (Cup car). I’m thankful to have had the experience.”