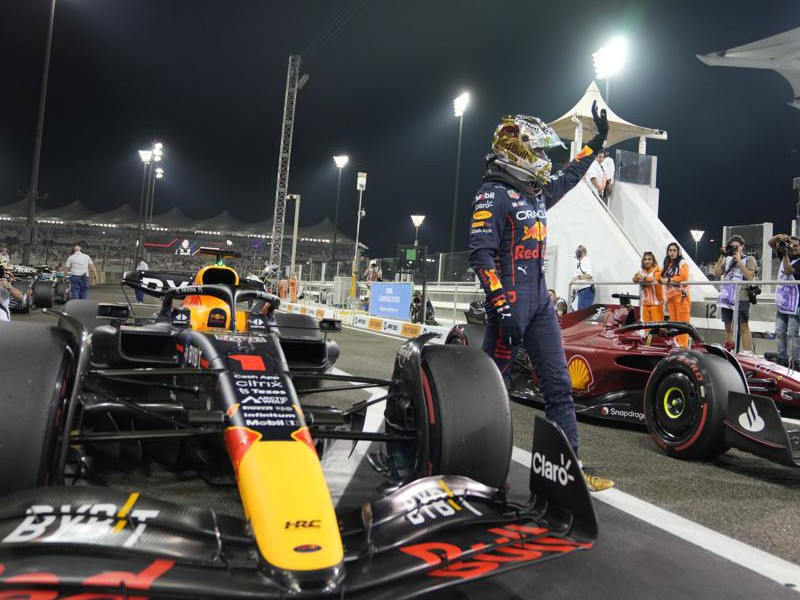 A week after Formula One champion Max Verstappen refused the team's order to yield sixth place to Sergio Perez in the Brazilian Grand Prix — Verstappen has still not explained exactly why — the Dutch driver led Perez out onto the final lap of qualifying with a slipstream at the Abu Dhabi Grand Prix.

Verstappen qualified first on Saturday, with Perez second, and both drivers praised the virtues of teamwork. Red Bull has already secured the drivers' title for Verstappen and the constructors' title as best team.

Red Bull says its aim for Sunday's race is to secure second place in the drivers' standings for Perez ahead of Ferrari's Charles Leclerc to underline a dominant season. A win for Verstappen would be his 15th of the season, extending the record he set in Mexico City last month.

“Very pleased for (pole position) and very happy that both cars are on the front row because we want to win the race but we also want to finish second with Checo (Perez) in the championship so that’s definitely a great start for tomorrow,” he said.

Verstappen set the pace with a lap of 1 minute, 23.824 seconds to beat Perez by .228 seconds. The Mexican driver is aiming to beat Ferrari's Charles Leclerc to second place in the championship behind Verstappen. Leclerc was .040 off Perez's time.

“It’s good to lock out that front row for tomorrow,” Perez said. “Max did a great job also for me. We worked with it as a team really strongly on that final run.”

Before the two Red Bull teammates set off together for the final lap, Perez had been left on his own earlier in the session.

Perez was left asking over team radio where Verstappen had gone when he emerged for his first run at pole position. The answer, Verstappen said, was that he was stuck in the pits with a sudden technical error. “Everything just turned off,” he said, but it was easily fixed and Verstappen was soon on track.

Leclerc said he made an error on his last qualifying run when he locked up a tire, “but, to be honest, it's the place we deserved today. The Red Bulls are stronger but we are still in a quite good position."

Leclerc's teammate Carlos Sainz was fourth ahead of the Mercedes pair of seven-time champion Lewis Hamilton and George Russell.

Four-time champion Sebastian Vettel qualified his Aston Martin ninth ahead of his last race before retirement. McLaren's Daniel Ricciardo, who is without a race seat for 2023, was 10th.

Earlier Saturday, Mercedes team principal Toto Wolff said his team could offer Mick Schumacher, son of seven-time champion Michael Schumacher, a role as reserve for next season after he was dropped by Haas for 2023.

“We believe that we can look after him if the situation were to happen and with someone that just fits the team, but we haven’t really put pen to paper, we haven’t really come anywhere close to any terms,” Wolff said.

“I think he just fits and now we need to make it happen," Wolff said, if the driver wants to.

Daniel Ricciardo is set for a similar role at Red Bull next season, team adviser Helmut Marko said Friday. Team principal Christian Horner clarified Saturday that, while Red Bull is interested, no deal has yet been signed to bring back Ricciardo to the team where he raced from 2014 through 2018.

“To have a driver of Daniel’s profile and history with the team within the group is only an asset for us,” Horner said.