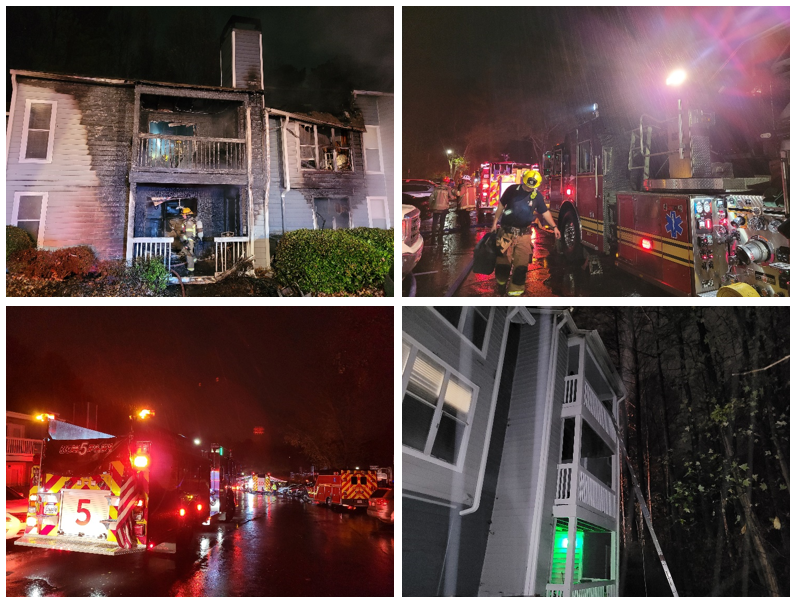 Three people had to be rescued from a Gwinnett County apartment fire early Friday morning. The three people became trapped on a third-floor balcony on the back side of the building. 9-1-1 callers reported seeing flames around 12:30 a.m. coming from the Montrose Berkeley Lake Apartments off Northwood Lakes Court in Duluth.

The Gwinnett County Fire and Emergency Services report says that heavy flames were coming from the left-front corner of the apartment building. They went around the back of the building to find the three people trapped on the balcony. An extension ladder was deployed and the three people – two adults and a child- were all safely rescued.

Firefighters, along with Duluth police officers, evacuated all 20 units. Fire crews aggressively fought the fire and were able to bring it under control in approximately 30 minutes, with 40 firefighters on the scene.

Six people, including a Duluth Police Officer who assisted with evacuations, were assessed by paramedics, but all the injuries were minor and no one was taken to the hospital.

The fire started after a residence was cooking and flames erupted on the stovetop. The woman was unable to control the fire and evacuated. Other residents were alerted to the fire thanks to working fire alarms. However, six people in upstairs apartments were unable to escape out their front door due to the fire and heavy smoke. Three of those jumped to the ground before fire crews arrived and the other three were the ones rescued from their balcony.

While all units were evacuated out of safety precaution, ten of the units were not damaged or affected. Individuals living in those apartments were able to return home. Two apartments were severely damaged by fire. Eight others were affected by smoke and water.

A total of 18 people were displaced, two of those were children.

Property management and the American Red Cross are assisting those who were displaced.