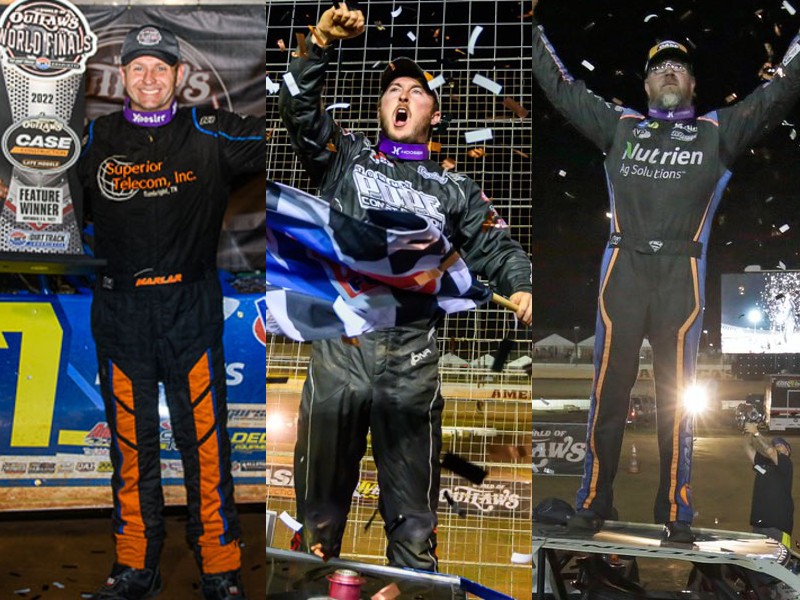 Mike Marlar, Tanner English and Jonathan Davenport closed out the World of Outlaws CASE Late Model Series season with wins over the weekend at The Dirt Track at Charlotte.

Marlar was the winner on Wednesday night, while English took the victory on Thursday night.

Davenport, from Blairsville, Georgia, went to victory lane in the finale on Saturday night at the 0.400-mile track located outside of Charlotte Motor Speedway in Concord, North Carolina.

On Wednesday, Mike Marlar drove from ninth to first to earn his fifth series victory of the season and his first at Charlotte.

Behind them, Marlar was methodically working through the field, picking off cars one by one on the bottom until he reached the top five on a lap 19 restart.

That restart propelled him further up the field as he swung under Tim McCreadie for fourth, Overton for third, and Trent Ivey for second by lap 37 when a yellow for Tyler Erb slowed the field.

It set up a single-file restart, putting Marlar behind Clanton.

When the green came out, Marlar thundered to the low side as Clanton rolled the middle, keeping Marlar at bay for two laps. But on lap 39, Marlar used his momentum to pull even with Clanton before making the pass in turn 4.

Marlar held on to score the $15,000 prize and his 13th career series triumph.

“The car was excellent tonight,” Marlar said. “All night long, I thought I had a good car. I was the first car on the track in qualifying, and the track was a little greasy, and I thought that hurt me some. We got a lucky break in the heat (race) when Hudson (O’Neal) pushed up, and it got me to start ninth (in the feature), and I got a lot of good restarts in that race.

“I had a good car, though, man. The closer I got to the front, the better it was.”

Clanton settled for second, with Ivey in third, Overton in fourth, and Tim McCreadie in fifth.

English garnered enough points in the standings to lock-up second place overall in the points and officially clinch the 2022 Rookie of the Year Award.

“It’s big to me to be able to do that and get second in points,” English said. “Everybody’s been tough. Max (Blair) has been tough all year, and (Ryan) Gustin… it’s just been a tough crowd, and it’s good to finish up front with all these people.”

Shane Clanton crossed the stripe in second for the second-straight night. Chris Madden came home in third, with Mike Marlar in fourth, and Hudson O’Neal in fifth.

After taking Friday off, the WoO Case Late Model season wrapped up on Saturday night, where Jonathan Davenport flew past Hudson O’Neal on lap 28 to score his fifth series win of 2022—this one worth $25,000.

O’Neal led the first 27 laps of the 50-lap feature, while Davenport charged behind him from his eighth starting position.

Davenport roared to the top of the racetrack, quickly working to fourth past Jimmy Owens and Shane Clanton when the first caution flew on lap 20 for Kyle Strickler.

Davenport continued his rise from there, blowing past Erb and Chris Madden on the restart, putting him in a position to steal the lead from O’Neal.

Davenport blasted past O’Neal on lap 28, and went unchallenged to score his 15th career series win and 22nd of 2022.

Davenport said he returned to a car that’s performed well all season after his other car was involved in crashes on Wednesday.

“We came in here Wednesday and struggled,” Davenport said. “We got wrecked with that car about a month ago, and it just hasn’t been the same since.

“We brought out the oldest car we got. I mean, this thing has been beaten up and down all over the country, and whenever we bring it out, time and time again, it always performs.”

Davenport said he realized late in the race his car was good enough to run anywhere.

“The bottom was pretty good there at the end,” Davenport said. “I finally turned down there in (turns) 3 and 4, and I was like dang, I could’ve done this the whole time, and it wouldn’t have been near as hard.”

The Carpentersville, Illinois driver finished the season with four victories and 13 podium finishes en route to the title.

“It’s just a lot of hard work,” Erb said. “It was years of hard work and getting everything right this year and just starting off real good.

“We just kept everything rolling throughout the year and kept our momentum up. The car was working great, and we had good finishes each night.”

The reigning World of Outlaws champion stated how much of an accomplishment it is for both of them.

“It means a lot,” Erb said. “Just the years going up and down the road and just everything coming together this year. To be able to knock this off my list, it’s a big accomplishment.”

The World of Outlaws CASE Late Model Series now looks ahead to 2023 and the Sunshine Nationals at Volusia Speedway Park, January 19-21. For more information, visit WorldofOutlaws.com.