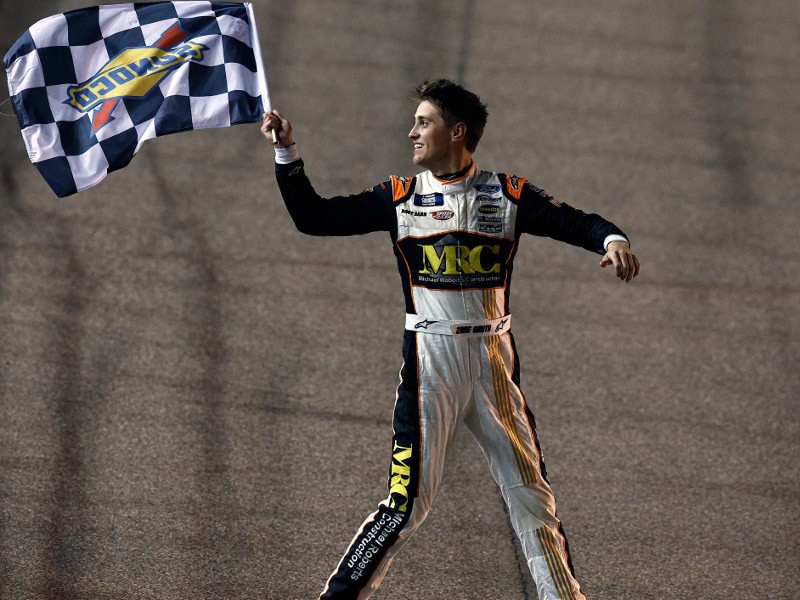 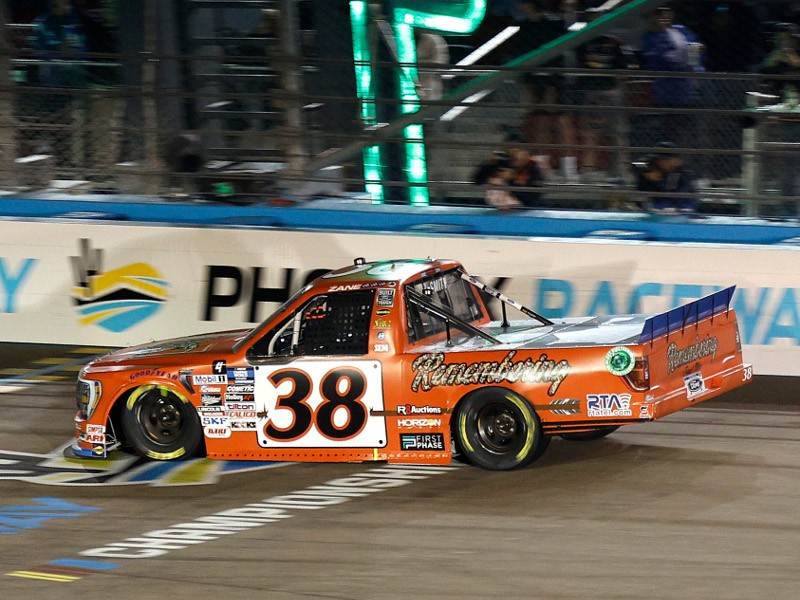 Holding off defending champion Ben Rhodes by .236 seconds at the end of a wild final two laps of Friday night’s season finale, Smith put it succinctly after a celebratory burnout at Phoenix Raceway.

“The third time’s the charm,” exulted an emotional Smith, who said he was crying throughout the final lap after wresting the lead from Rhodes one circuit earlier.

For the final restart, Smith chose to line up behind Rhodes, rather than to his outside. That enabled Smith to shortcut the backstretch dogleg and pull even with Rhodes to the inside. From that position he was able to edge ahead of eventual third-place finisher Chandler Smith to the outside.

“I’m going to win this,” Zane Smith said of his mind-set in overtime. “There was no other option. I was either backing it in the fence wrecking, or I was leaving tonight with a championship trophy. There were no other options, and when I saw the 18 (Chandler Smith) get underneath me I was worried that I got him too loose underneath me.

“Fortunately, he stayed off of me. I have a lot of respect for all three of (the other title competitors). It’s pretty impressive for some of the racing we’ve seen lately for us three to go at it that hard and that clean.”

Under caution for Hailie Deegan’s hard contact with the turn 3 wall on lap 134, Rhodes opted for right-side tires only, while the other three Championship 4 drivers — Zane Smith, Chandler Smith and Ty Majeski — took fresh rubber on all four corners.

Rhodes restarted third behind Stewart Friesen and Carson Hocevar on lap 141 and charged past Friesen into the lead on lap 144. Rhodes stayed out front with the other Championship 4 drivers in tow until Majeski lost control of his No. 66 Toyota as he tried to move to the inside of Zane Smith.

The subsequent overtime restart enabled the race winner to capitalize on his tire advantage. Rhodes got to Zane Smith’s bumper in the final corner and crossed the finish line less than a truck-length behind.

“I don’t know, two tires versus four, that was the name of the game,” Rhodes said. “We didn’t have the pace all night that we needed to be up there and repeat so it was a great heads-up call by my crew chief (Rich Lushes). Ultimately, we just didn’t need that last caution. I think we could have held them off for the final few laps. I was giving him (Zane Smith) all the dirty air he could handle. I think we were going to be fine until that caution got us.

“On that last restart, I tried to get a jump, but two tires versus four, I just didn’t have the grip I needed. I did the best I could and threw a move on him but didn’t have enough grip to make it stick… We just need to go back and do our homework, and second is not fun. I’m going to mope my way back to Kentucky (his home state).”

Chandler Smith was third, .259 seconds back of the winner.

“It just wasn’t meant to be,” said the Talking Rock, Georgia driver. “We gave it our best shot. I got into (turn) three, and it wasn’t met to be. It is as simple as that.”

The victory was Zane Smith’s fourth of the season, and it was a clean sweep. He earned the pole position in Friday’s time trials and won both stages before claiming the victory and the series title.

He’ll return to Front Row Motorsports next season, where he’ll defend his championship and compete in selected NASCAR Cup Series races, starting with the Daytona 500.

“Yeah, I don’t know. I was being aggressive there,” said Majeski. “We wanted to bring a championship home for Duke and Rhonda (Thorson) and everybody at ThorSport. I thought the best opportunity there for us was to try to wiggle the 38 (Zane Smith) a little bit and try to get underneath him and try to set up the race between Ben (Rhodes) and I. I was just trying to be aggressive underneath him and lost it off of (turn) two. All you can ask for is the chance to win the championship with five to go and we had that tonight, and it just didn’t pan out.”