NASCAR gears up for Championship 4 race at Phoenix 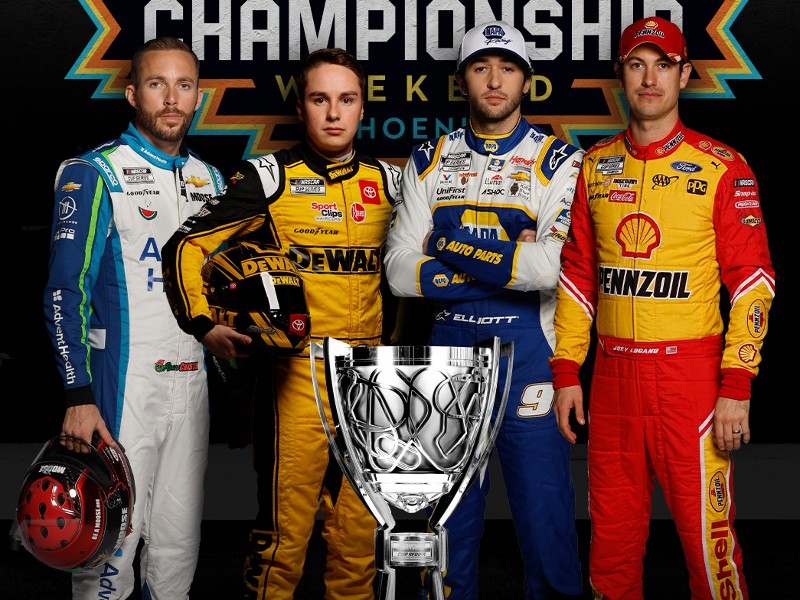 Can Ross Chastain parlay his amazing Martinsville rim ride into a championship for upstart Trackhouse Racing?

Will the NASCAR Cup Series feature more than one active multiple champion for the first time since Jimmie Johnson retired after the 2020 season?

Those questions will be answered on Sunday when the four eligible drivers —Bell, Chastain, 2018 champion Joey Logano and 2020 champion Chase Elliott — race for the title in the NASCAR Cup Series Championship event at Phoenix Raceway.

The season finale arrives with the sport still buzzing from the improbable events in last Sunday’s Round of 8 elimination race at Martinsville. As he had done in the Round of 12, Christopher Bell converted a must-win opportunity to advance in the Playoffs, this time to the Championship 4.

On the final lap of the Martinsville event, Chastain, against all odds, floored his No. 1 Chevrolet and rode the wall through turns 3 and 4 to steal a Playoff spot from Denny Hamlin, who lost a chance to compete in the Championship 4 a fourth straight time.

Chastain said he would have preferred to come to Phoenix with less fanfare, even though the move he pulled off at Martinsville is certain to be an indelible moment in NASCAR lore.

“I wish I would’ve had five more points throughout the Playoffs, and I could’ve just cruised in 10th and been out of sight, out of mind, and no one was the wiser that we made it, except us,” Chastain said. “Those weren’t the cards we were dealt though.

“This means the world. This is a life achievement, a career achievement — this is what we work for and dream about. Just getting the opportunity is all I could ever ask for. Then to do it, make the decision I did down the backstretch is wild enough. The fact that it worked is truly unbelievable. I still watch the video, and it doesn’t look real.”

If Chastain defied the odds in the microcosm of one lap at Martinsville, Bell did so on a grander scale with his victories in the Round of 12 and Round of 8 elimination races. Like Chastain, the driver of the No. 20 Joe Gibbs Racing Toyota will be competing in the Championship 4 for the first time.

“When you get to this and you think about who’s sitting there, who he’s going to have to race against, those three other competitors from great organizations, I think it’s going to be extremely hard,” said team owner Joe Gibbs in a Tuesday video conference with reporters.

“I think the way our Playoffs are designed, it does bring a lot of excitement to it, every three races, dropping out four cars. Now we’re down to just four.”

Of the Championship 4 drivers, Logano boasts the most appearances in the title race — five, tied for series-best. His two victories at Phoenix Raceway also are tops among the championship-eligible drivers.

Elliott, on the other hand, won his championship at Phoenix and has that experience in his memory banks, whereas Logano claimed his title when the season finale was held at Homestead-Miami Speedway.

Kyle Busch is the only active driver with more than one Cup title, having won in 2015 and 2019.

Team owner Rick Hendrick actually has two cars competing for championships — Elliott for the drivers’ title and Kyle Larson for the owners’ crown in the No. 5 Chevrolet.

“I think Sunday could be… just like always, a pit stop, somebody hits the air pressures right, cautions fall at the right time,” Hendrick said. “You just have to run it and see how it ends up.

“But there are four really, really good drivers in that race. You know, it’s just going to be hard to pick a winner in there. Of course, I hope our guys are the ones that win it. But it’s going to be a good show. It’s going to be a hard-fought show.”

It’s only fitting that three of the four drivers in the NASCAR Xfinity Series Championship 4 should be racing under the JR Motorsports banner.

All told, Noah Gragson, Justin Allgaier and Josh Berry have combined to win 14 races this year — Gragson with a series-best eight victories and Allgaier and Berry with three each. They will race for the series title against Ty Gibbs, who wrecked Joe Gibbs Racing teammate Brandon Jones on the final lap of last Saturday’s race at Martinsville and knocked Jones out of a Playoff spot.

Based on his record, Gragson enters the Championship 4 race as a heavy favorite. He has finished inside the top-10 in each of the six Playoff races so far, with wins at Texas and Homestead-Miami. He picked up his first victory of the season at Phoenix in March.

“Winning the championship has been our goal all year long, and we won at Phoenix in the spring,” Gragson said. “This weekend, it’s for all the marbles, and this team is at its best when something big is on the line.

“It’s been a great season for all of us on the No. 9 and for JR Motorsports, so the way to close it out is to win and bring a championship home with us.”

Accordingly, Rhodes will try to defend the championship he won with a third-place finish in last year’s title race at Phoenix. If he’s successful, Rhodes will be the second driver to win back-to-back championships in the division. Teammate Matt Crafton (2013-2014) is the only driver to have accomplished the feat so far.

Rhodes claimed his only victory of the season on the Bristol Dirt Track in April. Teammate Ty Majeski, on the other hand, arrives at Phoenix with considerably more momentum, having won two of the last three races, at Bristol (pavement) and Homestead-Miami.

In the title race, the ThorSport Racing drivers will face off against two Smiths — Zane and Chandler (no relation).

Zane Smith will be trying to break out of the runner-up rut on Friday. He has finished second in the final Camping World Truck Series standings for two straight seasons, he enters the Phoenix race second in points, and he has collected five second-place finishes without a win in his last 11 Truck Series starts.

Both Smiths have posted three victories this season. Though he didn’t qualify for the Championship 4 last season, Chandler won the season finale at Phoenix from the pole.

“I feel like last year, the last three quarters of last year, we showed what we were going to have in store for this year,” Chandler said. “We were really good at the end of last year — started getting wins and running up front every single week and were the truck to beat almost every other week — where the year before we were hit-or-miss.

“We ended up getting our stuff together, we were more consistent, winning races and I told the guys next year we are out for blood — we’re going to go get them next year. And look, we’re sitting here talking about running for a championship, and it has just been an amazing experience.”