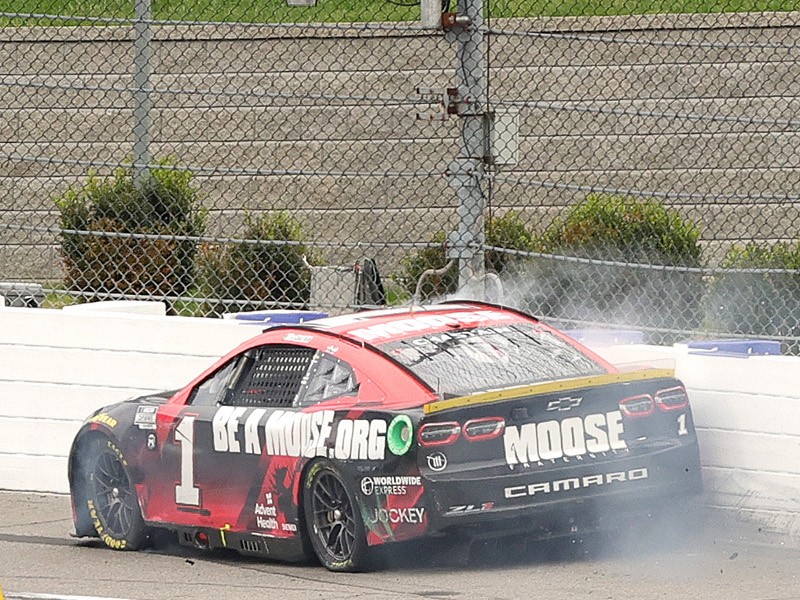 Ross Chastain rides the wall on the final lap of Sunday's NASCAR Cup Series race at Martinsville Speedway. The move took Chastain from 10th to fifth place, moving him above the cutline to make the Championship 4. Photo: Stacy Revere/Getty Images 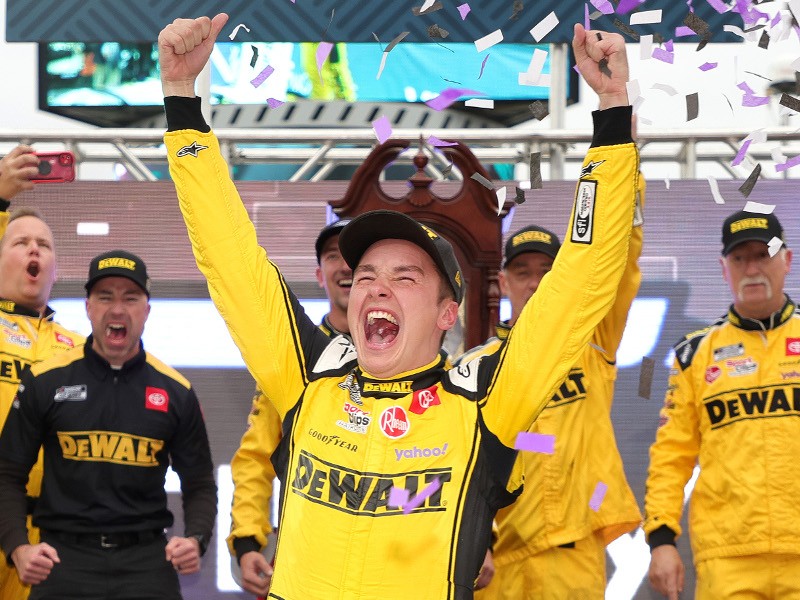 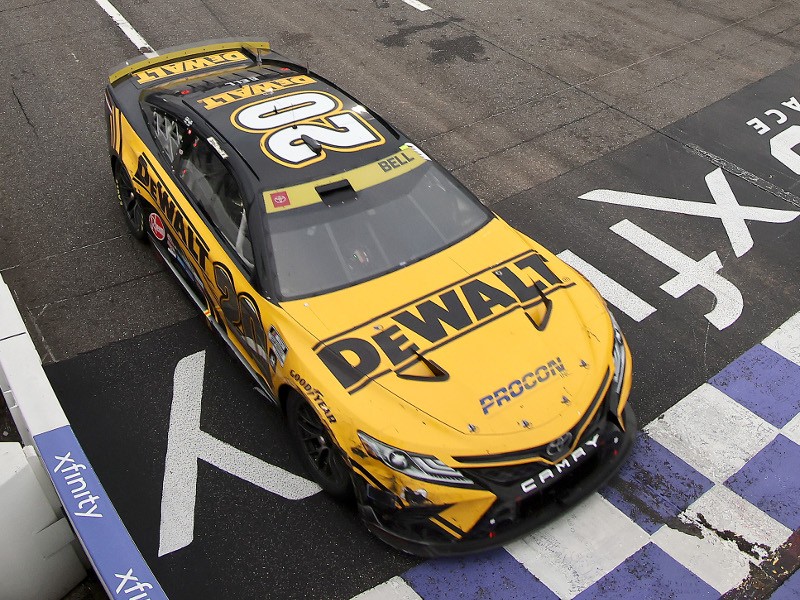 He did just that, shoving his way past another title hopeful, Chase Briscoe, with five laps to go.

From there, Bell drove away to score the win, making the cut to the title round next week at Phoenix Raceway.

“Mom and dad, we did it, wow,” said Bell. “I can’t believe it, man. To come here in Martinsville, this place has always been so tough on me. Just pre-race looking up, seeing all the fans, this place is packed.”

But the clinch story was happening behind him. Needing to make up ground on Denny Hamlin the last lap to have any hope of making the title round, Ross Chastain held the throttle on the floor going into turn three, slamming the safer barrier. Chastain continued to ride the barrier, bypassing several cars to move from 10th place to fourth, nipping Hamlin at the finish line.

That moved Chastain to the Championship 4, pushing Hamlin below the cutline in an amazing move reminiscent of a video game.

“Oh, played a lot of NASCAR 2005 on the game cube with (brother) Chad growing up,” Chastain said. “You can get away with it. I never knew if it would actually work.

“I mean, I did that when I was eight years old. I grabbed fifth gear, asked off of two on the last lap if we needed it, and we did. I couldn’t tell who was leading. I made the choice, grabbed fifth gear down the back. Full committed. Basically let go of the wheel, hoping I didn’t catch the turn four access gate or something crazy. But I was willing to do it.”

“Great move. Brilliant. Certainly a great move,” said Hamlin, who dominated the first half of the race, winning the first two race segments. “When you have no other choice, it certainly is easy to do that. But well executed.”

Chastain and Bell will join Joey Logano and Chase Elliott to fight for the championship next weekend at Phoenix.

For Bell, it’s his second “must win” victory of the Playoffs, having won at the Charlotte infield road course to make the cut to the Round of 8 four races ago. It’s his third win of the season, and the fourth of his series career.

More importantly, it means his first trip to the title round with a chance to win a Championship.

“Man, I say it all the time, but the driver is just a small piece of the puzzle for these races,” said Bell. “The reason why this car won today is because it was the best car on the racetrack. Adam Stevens, Tyler William, this entire 20 group, they just never give up. When our back is against the wall, looks like it’s over, they show up and give me the fastest car out here.

It will be the first title attempt for Bell and Chastain, while Joey Logano and Chase Elliott will both be looking for their second career series championships.

“Well, I hope everybody remembers that two years ago in the fall of 2020, I went down to the Southern 500 with Spire Motorsports,” said Chastain. “It was a big deal for us to race with sticker tires on. We had a podcast sponsoring the car. It was a big deal to beat one car. Single-digit laps down. That was two years ago at the Southern 500. To be here fighting for a championship now, it’s so surreal.”

“We accomplished our goal,” said Logano, who finished sixth on the day. “We did a really good job on pit road. We needed some good stops and got some momentum there. We had a solid race car. I didn’t make any enemies and I still have my crew chief next week. Those were the goals and we did that.”

“Yeah, super mixed emotions,” said Elliott, who ran in the top three most of the day before finishing in 10th place. “We made the drivers side and didn’t make the owners side. Just would have loved to have gotten the boss two cars in there. So certainly excited from the driver standpoint, but would have loved to have gotten both those boxes checked. Unfortunately didn’t.

“But, yeah, looking forward to getting home and working through what we need to work through to get ready for Phoenix. Certainly we’ll be ready to go the best we know how next Sunday.”

Meanwhile, Hamlin is joined below the cut by Briscoe, William Byron, and Ryan Blaney.

“It’s unfortunate not to transfer, but proud of the effort,” said Blaney, who finished third. “I didn’t do a great job the last two weeks and put us in a bad spot, but I’m proud of everyone all year and we’ll try to go run well at Phoenix.”

“Unfortunately, we weren’t really in the game,” said Byron after a seventh place finish. “I knew that early on in the race, we were making some progress, but we just struggled all day. The first three-quarters of the race were pretty miserable. Nothing like what we had in the spring. We were just tight with not a lot of pace.”

“Proud of our team,” said Briscoe, who came home in ninth. “We were in position at the end to potentially capitalize on it. Just the penalty at the beginning buried us. Win as a team, lose as a team. These guys have kept me in the Playoffs giving me positions on pit road.”

Kyle Larson finished in second, with Blaney in third. Brad Keselowski crossed the line in fourth, but was disqualified in post race tech after failing to meet the minimum weight requirement, according to NASCAR.

That moved Chastain to fourth, with Hamlin in fifth.

Brandon Reed Reporter
More Articles From Brandon »
© Copyright 2023 AccessWDUN.com
All rights reserved. This material may not be published, broadcast, rewritten, or redistributed without permission.