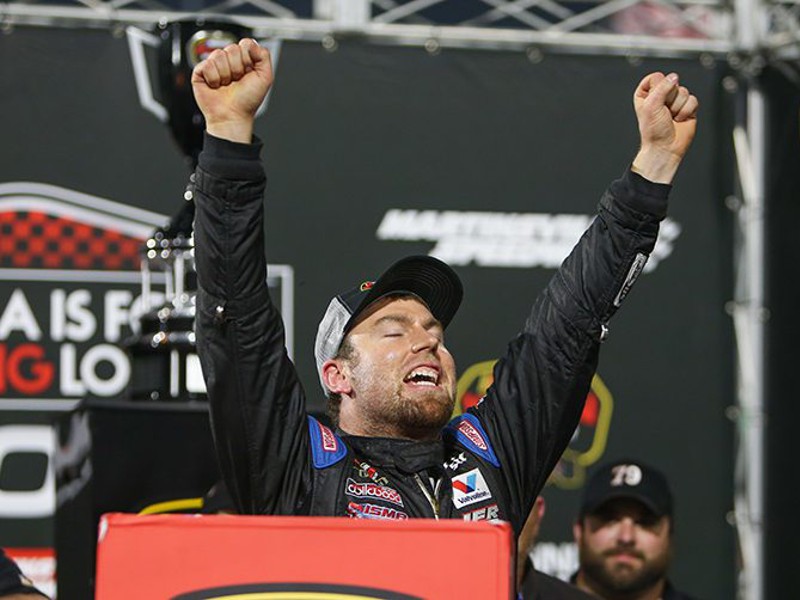 While battling for the lead with less than 10 laps remaining, McKennedy was turned in front of the field on the backstretch before sustaining a hard hit in the right-front suspension by Kyle Bonsignore, relegating him all the way to the rear of the lead-lap cars and erasing his comfortable points lead — and ultimately handing the race win to NASCAR Cup Series driver Corey LaJoie.

A year of hard work and sacrifice for McKennedy ended up being salvaged with a 12th-place finish, which earned him his first career NASCAR Whelen Modified Tour championship in just his second season of full-time competition.

The sting of missing out on a grandfather clock will stick with McKennedy for a while, but he was more than ecstatic to celebrate a Whelen Modified Tour championship in Martinsville’s frontstretch victory lane.

“This is icing on the cake,” McKennedy said. “I’ve won a lot of championships in the New England area in other forms of Modified racing and even in Supermodified racing, so to win this NASCAR Whelen Modified Tour deal is such an amazing accomplishment for all my guys and my car owner. This is an extremely tough division, but I’m satisfied to be a champion in it.”

The odds were initially against McKennedy winning the title when the 2022 season began.

Having only one career NASCAR Whelen Modified Tour victory to his name at Myrtle Beach Speedway, McKennedy also elected to join a brand-new operation led by Tim Lepine after spending the past four years with Tommy Baldwin Racing.

McKennedy and Lepine immediately found consistency in their first year together. After opening 2022 with a fourth-place run at New Smyrna, the duo recorded 13 top-10 finishes and claimed a victory at Claremont Speedway on July 29.

Another victory appeared to be secured for McKennedy and Lepine on Thursday evening after they elected to take tires and fuel during the first half of the race, which eventually cycled McKennedy to the front of the pack with Jimmy Blewett in tow.

Hard racing on the penultimate restart of the night resulted in both McKennedy and Blewett being eliminated from contention, with LaJoie — who led throughout much of the race — rallying for the victory.

“I thought we were in a great position to win,” McKennedy said. “Jimmy (Blewett) and I came off turn 2 side-by-side on that last restart, but I felt a big bump from behind on the backstretch. Then we all wrecked. It’s definitely unfortunate because we came so close to winning the biggest race of the year, but we still came through to win the championship.”

The last thing LaJoie wanted was to interfere with the NASCAR Whelen Modified Tour title fight, but knew he needed to take advantage of the fresh rubber on his car with only a handful of laps at his disposal.

LaJoie chalked up the accident between him, McKennedy and Blewett as three drivers doing everything possible to bring home a grandfather clock.

“I wanted the top to roll and Jimmy got a great launch in front of me,” LaJoie said. “We came off turn 2 and (McKennedy’s) right front was splitting my car and Jimmy’s car. (McKennedy’s) right rear bumper hooked my tire and turned me into him. I don’t feel like I was a culprit, but it was just hard racing, and we came out lucky on the other side.”

Thursday’s triumph was not the first time LaJoie had won a NASCAR-sanctioned Modified event. He previously took home a checkered flag in the NASCAR Whelen Southern Modified Tour when the series raced on Atlanta Motor Speedway’s frontstretch oval back in 2010.

Being able to claim a grandfather clock is an achievement LaJoie plans to cherish for the rest of his career. He expressed his gratitude toward everyone that made his No. 53 Curb Records Modified fast from the opening practice session.

“This car was dialed in,” LaJoie said. “Bono (Manion), Elizabeth (Manion) and Rob Fuller put this thing together at the last minute, but this was a full-on effort with a bunch of friends, and we succeeded (on Thursday). We came here for a clock, and we got one.”

LaJoie expressed relief that the final caution of the night ultimately did not cost a championship for McKennedy, who expressed some frustration over having a potential victory taken away from him in the final laps.

Everything had to go perfect for McKennedy to fend off Ron Silk, Justin Bonsignore and Eric Goodale for the title, all of whom were separated by just 13 points entering Martinsville. With Silk and Bonsignore both encountering issues of their own, it was a late battle between McKennedy and Goodale to decide the championship.

McKennedy considers it a blessing that everything still worked out in his favor despite the late crash that could have easily ended his title hopes just a few laps from the finish.

“A ton of work went into this race the last few weeks,” McKennedy said. “Everyone gave it 100 percent and that’s all you can ask for. We were lucky in a few ways because we were wrecked on the backstretch and our championship was over. I still can’t believe we got wrecked in the end and that took some wind out of the sails, but at the end of the day, we are champions.”

McKennedy never once viewed himself as an underdog for the NASCAR Whelen Modified Tour championship and takes pride over now being associated with many legends in the discipline like Bonsignore, Silk, Richie Evans, Mike Stefanik, Ted Christopher and more.