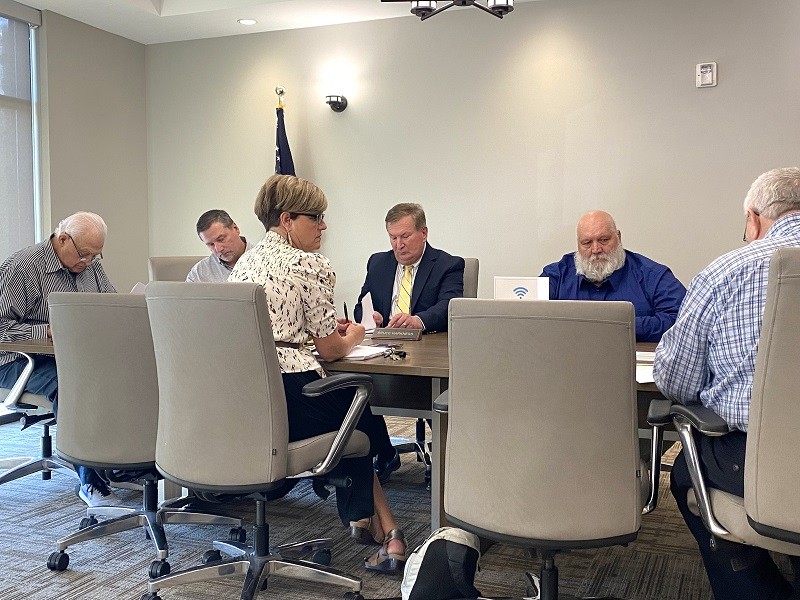 Habersham County Manager Alicia Vaughn and members of the county commission grapple with how to handle $11 million in anticipated cost overages on sales tax projects approved by voters in 2021.
Rob Moore
Contact Editor

Faced with millions of dollars in cost overruns in the estimates for new facilities approved by voters, Habersham County leaders now are faced with how to fund those Special Purpose Local Option Sales Tax projects.

County Manager Alicia Vaughn said under the law the county must complete projects included in a voter-approved SPLOST, even if that means taking the money from the county’s general fund.

But Vaughn said the county does not have money available for that purpose.

One possible way is the formation of a public facilities authority appointed by the county commission for the purpose of issuing bonds to finance the projects.

“We had the county attorney discuss the option of creating a public facilities authority for the county, and the public facilities authority would be created through the legislative cycle,” Vaughn said. “And it would require a 5-0 vote for creation of the facility by the board of commissioners – potentially at the next meeting, but hopefully before the end of the year.”

Commissioners said they were skeptical about forming another authority after the county was bitten by a couple in the past, but realize they need a group that can secure funding for major projects.

County Attorney Donnie Hunt told commissioners to study the information presented and ask any questions they have as soon as possible since time is short to get the local legislation introduced next session.

Additionally, Hunt said the local legislative delegation likely will not introduce the measure if all five commissioners are not on board with the concept.

Using the county's credit rating, a public facilities authority can issue debt on the county's behalf for projects identified by the county commission.

“The reason why we're even discussing it is because we have three SPLOST projects, very important projects, that were approved on the 2021 SPLOST,” Vaughn said. “And the three are the administration building for fire, EMS, and 9-1-1. And then the animal control facility, and then the brand new radio communication system for public safety. All three of those projects have come in considerably over budget. And that's just the times that we're living in right now.”

The cost overages due to rising costs of materials, fuel, and other expenses total some $11 million – not something the county can fund outside proceeds from the 1-cent Special Purpose Local Option Sales Tax, even though it’s running nearly 9% above projected collections.

Vaughn said the county does not have a lot of choices now that bonds have been issued for the radio system and the fire/emergency management/9-1-1 building. Those bonds are repaid with SPLOST proceeds.

Also discussed was the possibility of asking the voters how they want to proceed on projects they voted to fund.

“Another option is to go back to the voters and ask them if they want to approve for us to say that those projects are not feasible anymore, which means that we would just not do them,” Vaughn said. “We would have to tell them how we plan on spending those SPLOST dollars otherwise. That’s another option. We’re just really looking at all the options that we have.”

Commissioner Dustin Mealor said since the new animal control shelter is not being funded by bonds that already have been issued, he would be in favor of going to the public to tell them it’s no longer feasible rather than have to raise property taxes to construct it.

Mealor said that’s purely an economic decision on his part, not a political one.