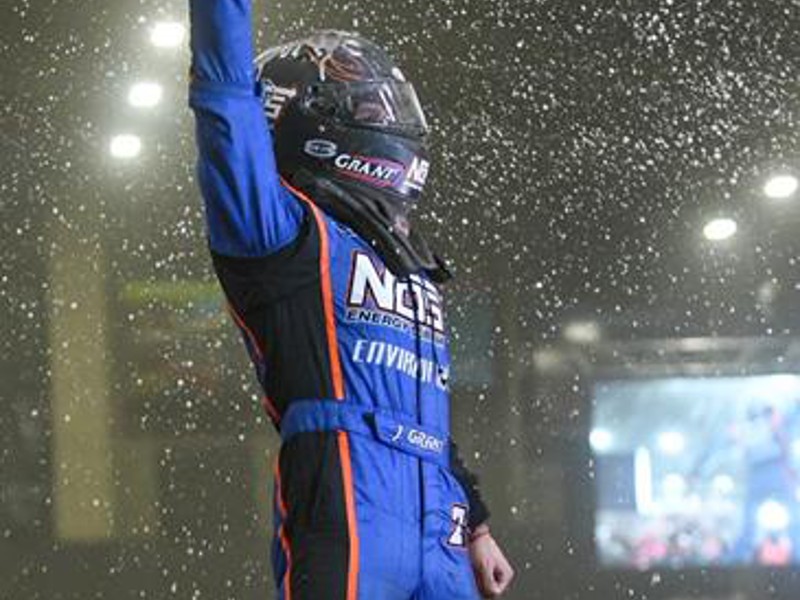 It marked the fifth preliminary night victory for the Ione, California native, as he and Stenhouse, Jr. are locked into Saturday night’s A-Feature.

The win by Grant is the first of the week for RMS/NOS Energy Drink Team, ending the steak of preliminary wins by Keith Kunz Motorsports at four. The win is also the fourth of the week by a driver from California. Oklahoma’s Christopher Bell captured Thursday’s prelim victory.

Working by early leader Sam Johnson on lap 16, Grant held the point until lap 24 when Stenhouse, Jr. charged to the top spot, only to have a caution negate the pass.

“We caught a big break there getting back to the lead and knowing that the bottom was there, and it was cleaning off, but I still didn’t feel that great down there so I kept trying to circle the top of one and two, and then he finally rolled up alongside me and I had to hustle down the backstretch and get that door closed.”

Back under green, the duo battled hard for the lead, with Grant finally getting the advantage. In the end, Grant took the win by 0.504-seconds over Stenhouse, Jr.

Zeb Wise finished in third, with Bryant Wiedeman in fourth and Sam Johnson in fifth.