Basketball: East Hall splits with Madison Co. in 8-4A action 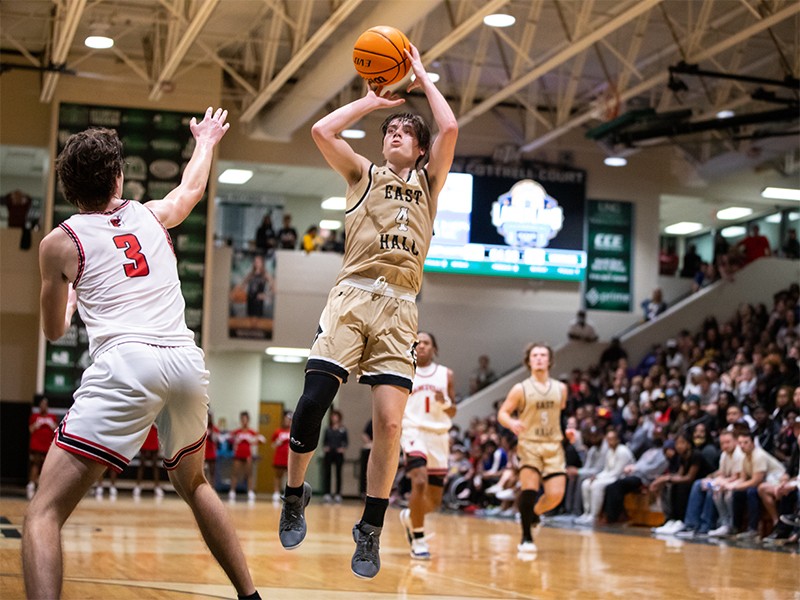 RABBITTOWN — The luster of winning the Lanierland Tournament for the first time in 11 years has worn off of the East Hall boys basketball team.

The Vikings fell to Madison County 57-45 on Friday at home in Region 8-4A play, their third straight loss since Lanierland, and all in region play.

“I think we got a little satisfied as a group and, now, we’re struggling,” Yancey said. “This is a scrappy bunch, but we have to be better when adversity hits. We can’t use who isn’t playing as an excuse. I have to get these guys better prepared.”

The Vikings took the first lead on a 3-pointer from CJ Agborsangaya in the first 30 seconds. But the Red Raiders, and Peyton South, in particular, came out firing to start the game.

South hit his first four 3-pointers and helped Madison County run out to a 15-7 lead late in the opening quarter.

“Those guys can shoot and (South) really kind of got our guys on their heels at the beginning,” Yancey said.

But Clete Cooper, who finished with a game-high 24 points, started heating up as well for East Hall. Cooper hit two free throws and a jumper to pull East Hall within 15-11 by the end of the period. Cooper scored again to open the second quarter to get the Vikings back within two points at 15-13.

Madison County answered with Chris Rhodes powering an 8-0 run with six points, four on stick-back baskets, to push the Raiders lead to 23-13. But the Vikings responded over the final three minutes of the half.

Levi Holtzclaw and Cooper hit back-to-back 3-pointers to cut the lead to 23-19. Cooper added another basket as Madison County eventually took a 28-23 lead into halftime.

That would be as close as the Vikings would get, however. Madison County opened the third quarter with an 11-2 run as Rhodes continued to dominate inside for the Red Raiders.

East Hall did not go away. Holtzclaw hit a 3-pointer to start a 7-2 run to close out the quarter trailing just 41-34. But Madison County put the game away with a 10-1 spurt to open the fourth as Rhodes had six points to push the lead to 51-35.

The Vikings had just seven turnovers in the first half but had seven in the pivotal third quarter and finished with 17 for the game as Madison County turned those into 13 points. The Red Raiders had just 8 turnovers for the game.

The loss dropped East Hall three games behind the Red Raiders, who sit second in the region standings. But the Vikings are among a crowded bunch of four teams all within one game of each other for third place.

“We just need to get back to work,” Yancey said. “Every game in this region is tough and we need to be getting everyone better prepared.”

Rhodes used most of his 11 rebounds to pour in 18 points to lead Madison County. South finished with 14 for the Red Raiders.

After Cooper’s 24, no other Viking was in double figures. Holtzclaw finished with 9 points and John Salyers had 7. Agborsangaya had just the one 3-pointer to start the game but did pull down 9 rebounds for East Hall.

Maleah Harrison scored 8 points in overtime to help propel the Lady Vikings to a Region 8-4A win at home.

It was a tight affair the entire way.

East Hall took the initial lead on a 3-pointer by Alexis Burce as the first of seven lead changes in the first half. The Lady Red Raiders tied the game at 6 on consecutive baskets from Tiffany Wilson and the first quarter finished in a 9-9 tie.

Wilson gave Madison County an 11-9 lead, but the Lady Vikings got 3-pointers from Burce and Kaylana Curry to reclaim the lead at 15-13. After three more lead changes over the final three minutes, the Lady Red Raiders took a 22-21 advantage into halftime.

The Lady Vikings looked ready to take control with an 8-3 run for a 34-29 lead late in the third quarter. But Madison County battled back with an 8-2 run into the fourth quarter to retake the lead at 37-36.

East Hall’s Amari Burce had a chance to win the game with 2.1 seconds left but hit just 1-of-2 free throws to send it to overtime.