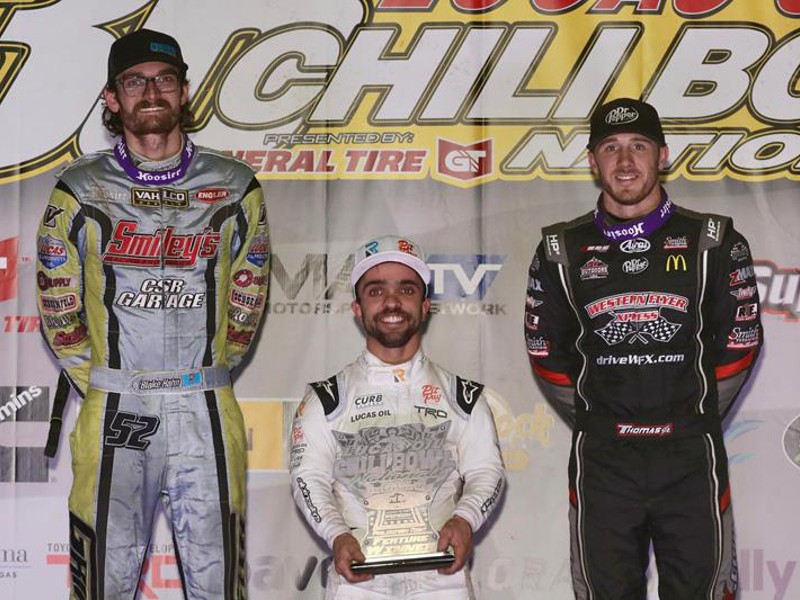 “My guys do an unbelievable job on these racecars, and it shows,” Abreu said. “We’ve won three in a row this week, and my car as the race went on just built momentum. It would just shoot off the corner, but at the end, my pace slowed down just so I didn’t make mistakes on the cushion.”

Starting from the fourth position, Abreu worked to the runner-up spot on lap 11 after a multi-lap battle with Kevin Thomas, Jr. and Colby Copeland. A caution closed the gap from Abreu to leader Jason McDougal.

Abreu surged to the lead on lap 14, and paced the race the rest of the way, despite coming under fire a couple of times.

The first came with four laps to go, when Chase Randall tried to make a moved, but Abreu was able to hold him off. Then on the final lap, Kevin Thomas, Jr. made a run for the lead, but Abreu edged him out by 0.353-seconds.

Thomas, Jr. held on for second, with he and Abreu now locked into Saturday night’s A-Feature.

“I could sense Kevin (Thomas) behind me and was just kind of waiting to make that last-second move down there,” said Abreu. “I saw him right at the exit of turn two and was able to get enough launch to clear him and block his run.”

Blake Hahn finished in third, with Colby Cope in fourth and McDougal in fifth.