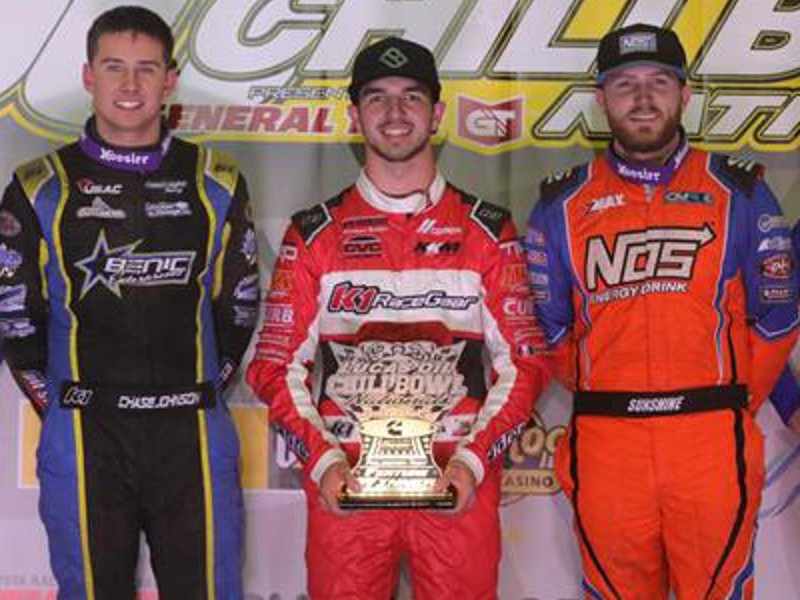 The Lincoln, California native wheeled the Keith Kunz Motorsports-Curb-Agajanian No. 98 to the front of the field on lap 22 and held on to top Monday’s Cummins Qualifying Night A-Feature.

Locking into his first Saturday night A-Feature, the win is No. 30 atop the Tulsa Expo Raceway for car owner Keith Kunz.

Riding third the opening 20 laps, the race for the lead to that point was between Mitchel Moles and Jerry Coons, Jr. Exchanging the lead three times, Moles finally got the advantage on Coons following a restart on lap 19.

Moles looked to have the race in hand before a misstep on the cushion through the fourth turn sent his car tumbling down the front straightaway on lap 21.

Carrick moved to the point, and held the lead for the final eight laps en route to the win by 1.225-seconds.

The victory was slightly soured when Carrick flipped following the checkered flag.

“I went through the finish line and when I went to use the brake pedal, there were no brakes,” said Carrick. “By that time it was too late and I plugged it into the fence.”

Tyler Courtney crossed second to lock into his sixth championship A-Feature in as many years. Chase Johnson finished in third, with David Gravel in fourth and Nick Hoffman in fifth.