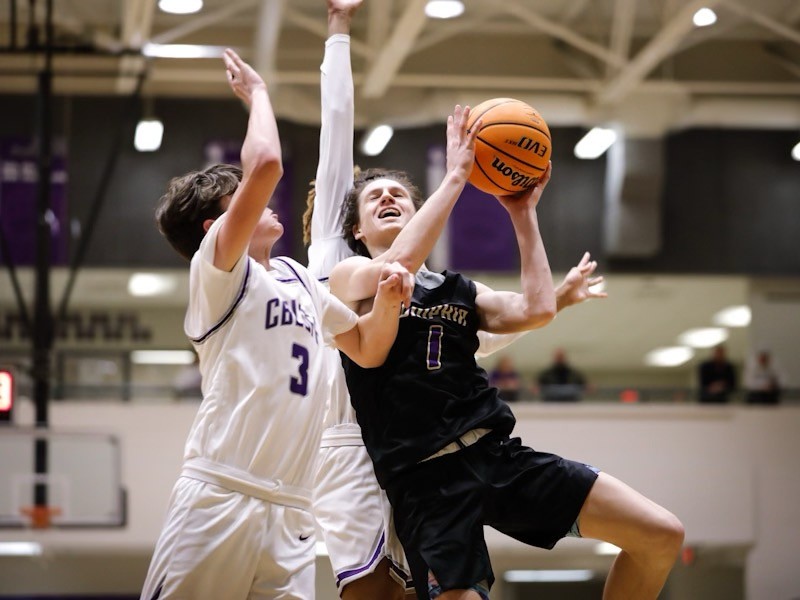 FLOWERY BRANCH  — Senior Jones Harris recorded a double-double to lead Lumpkin County to a big 57-51 road win over Cherokee Bluff on Tuesday in Region 7-3A action.

Jones poured in 22 points and pulled down 11 rebounds, and added 3 assists, as Lumpkin County rallied from a halftime deficit.

“Jones had a big game...and has been great for us all year,” Lumpkin coach Michael Parker said. “Freshman Cal Faulkner is growing up every game. But we also had guys step up all night and make big shots or grab big rebounds. A total team effort to come away with that win.”

Faulkner finished with 16 points, 5 rebounds, and 6 assists and Hunter Cooper had 7 points and 5 rebounds for the Indians.

Lumpkin opened the game with a 19-13 first quarter but fell behind 30-27 by halftime as Bluff’s Cade Simmons drained three 3-pointers in the second quarter. The Indians’ defense was the difference in the second half.

Lumpkin held the Bears to just 21 points and used a 16-11 third quarter to retake the lead and pulled away in the fourth quarter.

Bluff was paced by Simmons, who poured in 19 points, including five 3-pointers. Carlos Marlowe added 11 points and Boston Kersh 10 for the Bears.

Bluff has now lost three straight at home. It was Lumpkin's second road win of the season.

Both teams will be back in region action on Friday. Lumpkin County plays host to West Hall while the Bears will play host to Dawson County.

The Falcons moved into a tie for third place in the very tough Region 8-4A with a come-from-behind win over the Titans at home.

North Oconee was just 9-of-13 from the free-throw line and the Falcons hit just 3-of-11 in the final period from the line. But they also hit four of their 9 3-pointers in the game to hold on for the victory.

Jackson Owens paced Branch with 16 points. Trey Shaw added 13 and Jeremiah Ware had 11 for the Falcons.

Branch next will travel to Madison County on Friday. The Red Raiders knocked off Cedar Shoals, 67-61, on the road on Tuesday.

The Warriors kept pace with North Hall and Gilmer atop Region 7-3A with a dominating road win.

The Warriors next will play host to East Forsyth on Friday. West Hall (4-11, 1-4 Region 7-3A) travels to Lumpkin County on Friday.

Lakeview Academy opened the second half of the season with a solid home win over Brandon Hall in Region 6-A Private action.

Lakeview exploded for a 25-point third quarter and held Brandon Hall to just 9 points while building a 46-32 lead heading into the fourth quarter.

Harrison Cooper led the way for Lakeview with 22 points. Isaiah Rico added 17 points and Jack Collins had 9 for the Lions.

Lakeview next will travel to Pinecrest Academy on Saturday in another region battle.

The Class 6A No. 2-ranked Wolves stayed perfect in Region 8-6A play with a big road win on Tuesday.

Buford (11-2, 2-0 Region 8-6A) next will play host to Habersham Central in a battle of region unbeatens on Friday.

The Raiders also stayed perfect in Region 8-6A play with a win at home on Tuesday.

Habersham Central (9-4, 2-0 Region 8-6A) will bring a three-game win streak at Buford Arena on Friday in a battle of region unbeatens.

Smart, Georgia trying to stop skid against Saban, Alabama
Kirby Smart and Georgia get a chance to snap their losing streaks against Alabama in the biggest game of the season
Sports
High School Sports

Basketball: Area teams resume region play on Tuesday
More than a dozen teams in the Northeast Georgia area will jump back into their all-important region schedules on Tuesday. By Friday, nearly all will resume their quests for region tournament playoff seeding...
By Jeff Hart
Privacy | User Agreement | Contact | Advertise With Us
2023 © Jacobs Media Corporation. All rights reserved. EEO Report. Website by Full Media
Login / My Access
close
Search