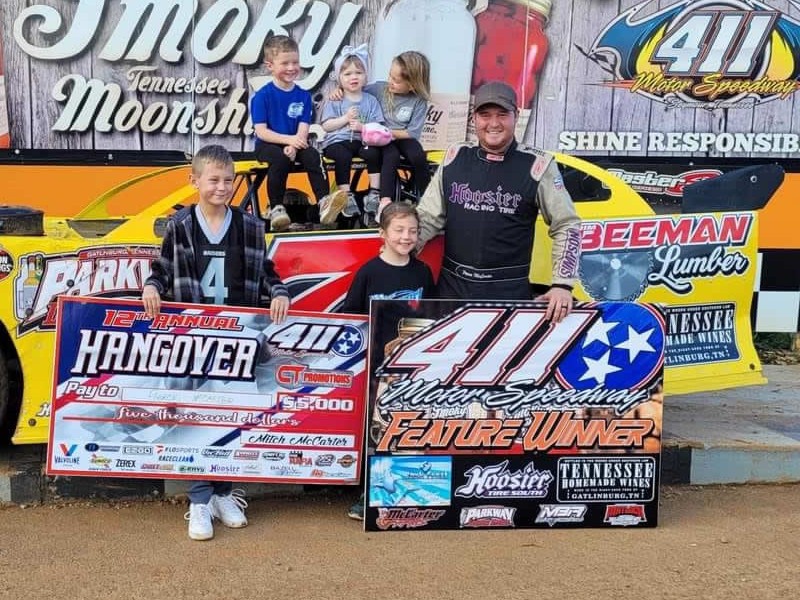 Pierce McCarter took advantage of the leader’s misfortune late in the going to score his second straight Hangover victory at 411 Motor Speedway in Seymour, Tennessee on Saturday.

The win in the 30-lap Super Late Model feature at the 3/8-mile dirt track was worth a cool $5,000 payday for the Gatlinburg, Tennessee native.

Cory Hedgecock led the field to the green flag, with McCarter and David Crabtree giving chase. McCarter worked into cutting into Hedgecock’s early lead when the caution flew for debris.

On the restart, Christian Hanger moved into third, and began working to move into contention for the lead. That charge came to a sudden end when he tagged the wall in turn two, ending his day.

Back under green, Hedgecock and McCarter resumed their battle for the lead. That fight went away when Hedgecock’s car suddenly slowed as he pulled into the infield with problems.

From there, McCarter pulled away from the competition en route to the win.

Crabtree finished in second, with Kirk Phillips in third, with Clay Coghlan in fourth and Shane Bailey in fifth.