Game of the Week: Chestatee hopes to start region slate on a high note 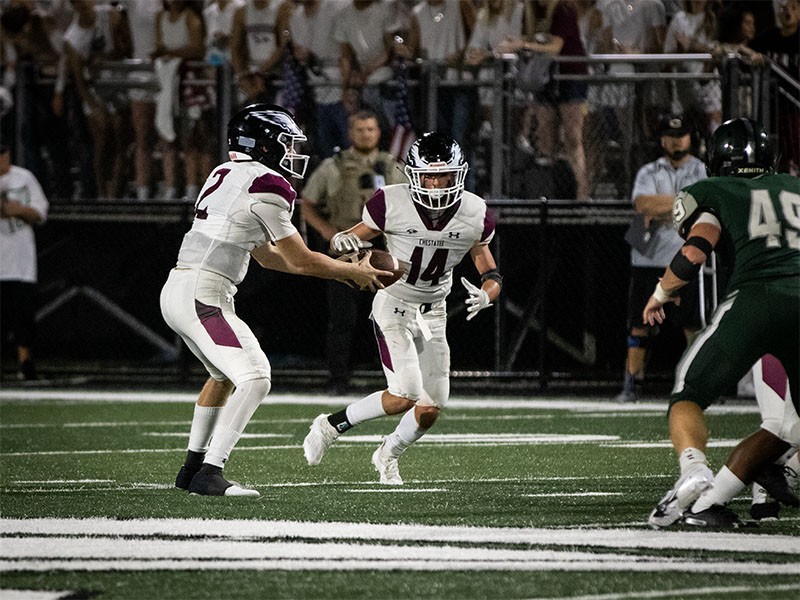 Chestatee's Luke Bornhorst hands off the Elijay Pruitt against North Hall. The War Eagles play host to North Oconee on Friday in their Region 8-4A opener.
Photo/Seth Chapman
Contact Editor

GAINESVILLE — When you walk into the Lynn Cottrell Complex at Chestatee High School, the feeling is much different in 2021.

There's confidence in the air and a sense of camaraderie among the players. It's a night and day difference from the last few seasons in Sardis.

Chestatee coach Shaun Conley says his players have a different attitude and gives all the credit to the senior leadership.

"Jeronimo [Marin] talked about our guys playing for each other, and they really do," he said. "They like to see each other succeed."

This week, they'll be put to the test as they open Region 8-4A play against North Oconee. It's a chance for the War Eagles to push the ship toward the state playoffs when they play host to the Titans. Kickoff is set for 7:30 p.m.

Chestatee coach Shaun Conley said starting off the region with a win would be "huge for us."

"But it's huge for us because it's the next one," Conley said. "Really that's the way we've been since we've been here. We're trying to focus on the next one. I don't think it will make or break us either way, but it sure would be nice to get that first one."

The War Eagles' (2-2) success this season is a testament to their defensive play. Led by a solid group of seniors, Chestatee is giving up 20 points per game -- a 20-plus point improvement from last season.

Senior defensive lineman Jeronimo Marin says they made a decision after last season's 0-10 finish that they were going to change it in 2021.

"Just to play for the seniors ... play for your brothers," senior defensive lineman Jeronimo Marin said. "We just play for each other. Overall, it's just changing the culture around here."

Of course, having the Class 4A passing leader on your side helps tremendously as well.

Luke Bornhorst (1,034 yards) has steadily improved over the first four games, and having solid targets like Hunter Fouche, Drew Knickle, Maddox Miller and Christian Jarrard has accelerated his success.

"We've been running this offense a long time, and usually that second year, we see a vast improvement in our quarterbacks. We are seeing that in Luke," Conley said. "And the cast around him, you know, we don't have the one stand-out guy this year, but we've had several games where we've had two receivers over 100 yards."

Sophomore running back Jason Granados, along with a solid offensive line, has balanced out the War Eagles' offensive attack.

North Oconee has played an incredibly tough non-region schedule. The Titans lost to Class 3A top-ranked Oconee County, Class 4A fourth-ranked Benedictine and Class 6A Cambridge.

Sifting through the online stats, the Titans like to run the ball first, averaging 176.8 yards per game while posting 120.2 passing yards per game.

The Titans will count on Dominic Elder and Rodrick Finch out of the backfield, while Louden Schnake will direct the offense.

"We're going to have to take care of the football and do what we do," Conley said. "We need to execute and continue to play hard."