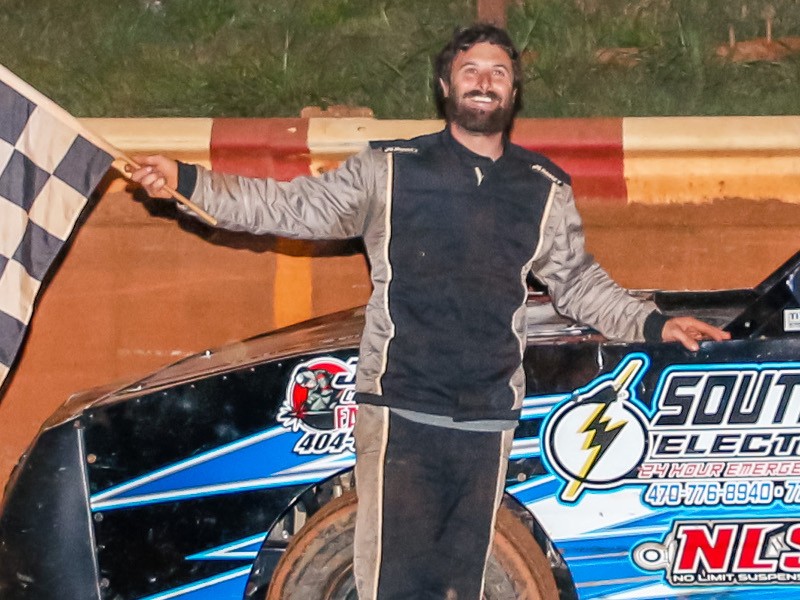 Jimmy Johnson was not going to be defeated on Saturday night. Even a scary moment that saw his car momentarily airborne and bicycling on two wheels couldn’t shake him from the lead, as the drove to the Stock V8 feature victory in Saturday night’s Roger Cooper Memorial at Georgia’s Winder-Barrow Speedway.

The Monroe, Georgia speedster started the feature at the ¼-mile clay raceway on the outside of the front row, alongside pole sitter Ronnie Poole. On the drop of the green flag, Poole jumped to the lead, with Johnson in hot pursuit.

Johnson pulled alongside Cooper as the two battled for the lead, only to see his challenge go away when another car spun behind the leaders, brining out the caution.

The battle resumed on the restart, with Cooper working hard to hold Johnson at bay. Time and again, Johnson looked to the inside, with Cooper holding the point each time.

The battle came to an end about a quarter of the way through the feature, when Poole’s car slowed suddenly coming off turn four with mechanical issues. That handed Johnson the lead.

On the restart, the race almost went south for Johnson when it appeared that he hooked a rut in the low groove off turn two. That sent the left side of his car high into the air, as he bicycled on the two right side tires. Despite teetering momentarily, the car came back down on all four tired, and Johnson was able to maintain his led.

From there, Johnson ran mostly unchallenged through a series of cautions and restarts. He would drive away from the field and score the victory by almost a six second margin.

Dustin Moore finished in second, with Chad Puckett in third, Tim Corbin in fourth and Shannon Duck in fifth.

In other action, Joe Yarbrough took the win in the Limited Late Model feature, with Ken Lampp and Jimmy Johnson rounding out the podium.

Aaron Crowell was the winner in the Modified Street feature. Joe Nash followed in second, with Jordan Poole in third, Brandon Franklin in fourth and Robby Stewart in fifth.

Austin Brumbelow was the first under the checkered flag to win the Stock 4A feature. Matt Gerrin, Derek Lord, Roger Cothran and Brandon Cox rounded out the top five.