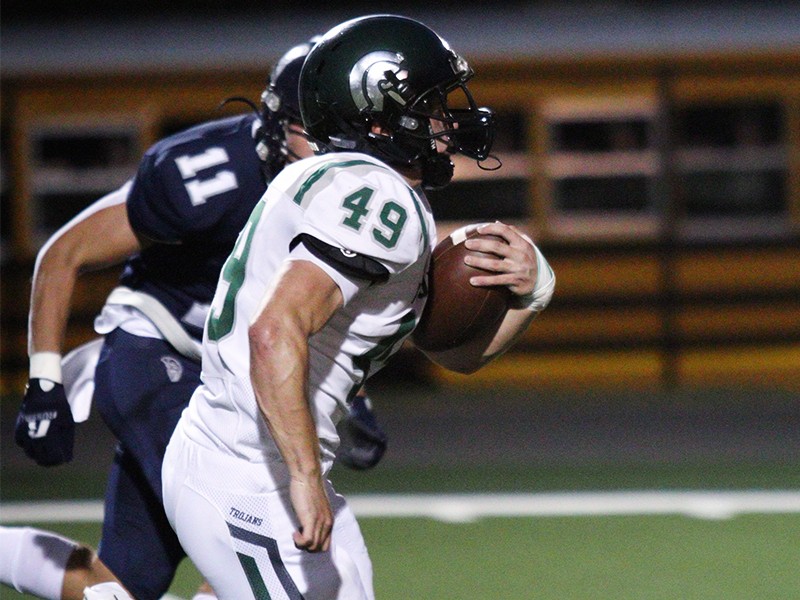 North Hall's Kevin Rochester led the Trojans with 157 yards on 13 carries and four touchdowns in a 38-13 win over West Hall at Spartan Field on Friday.
Photo/Ethan Nix
Contact Editor

OAKWOOD — Coming off an emotional win over Chestatee last week, there was reason to believe this might be a letdown game for the Trojans.

"The first thing we said to our kids on Monday was, while the game Friday was exciting and emotional, it's gotta go," he said. "Let's have a big clap, and let's put it behind us."

And that they did.

The running back tandem combined for 197 yards in the first half alone along with five touchdowns, with Rochester leading the way with 157 yards and four touchdowns on 13 carries. Atha did his part as well by adding 40 yards and a touchdown of his own.

Senior quarterback Bradford Puryear didn't let his backs have all the fun as he put up 66 yards on the ground as well.

Puryear had one completion for 9 yards, but the passing game wasn't needed tonight.

"We felt that we could still throw the ball, we had some things that we had worked on all week in the passing game, but our inside game between my quarterback and my fullback [Rochester] has been so good," Bishop said.

After winning the game for the Trojans last week, North Hall hero and kicker Luke Brown kicked a long 51-yard field goal in the 3rd quarter to extend their lead.

On West Hall's end, the Spartans couldn't get anything going offensively against a stout Trojan defense. They had only 163 yards of total offense as they were consistently stifled by the defense.

Senior quarterback Nick Sturm was terrorized by the North Hall defensive line all night long, being pressured and sacked multiple times. They were able to end the shutout at the end of the 3rd quarter off a four-yard run from Sturm.

Later on, in the 4th quarter, Sturm found his man Andrew Malin for a big 59-yard passing touchdown. The Spartans quarterback ended his night with 10-of-16 for 121 yards passing and the aforementioned score.

With the win, the Trojans are in a three-way tie for the top spot in Region 7-3A -- both Dawson County and Cherokee Bluff won Friday.

"Obviously, there's a long way to go, we got five more games, everybody's a quality opponent coming up," Bishop said. "The rivalry between White County and North Hall is always intense, the home team hasn't won in five or six years, so it's gonna be a tough week next week just to get past them. So, that's gotta be our focus: find out what we didn't do well tonight, get better at it and then focus on White County."