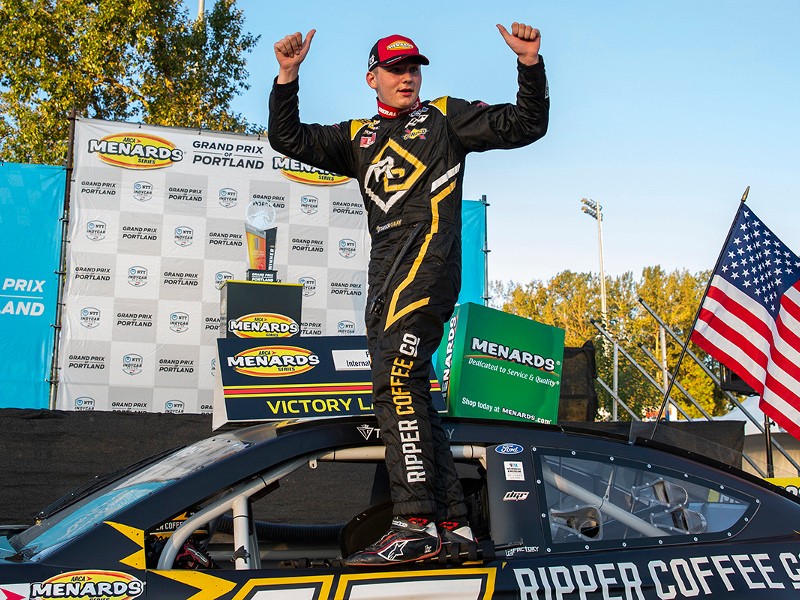 He did so despite crossing the finish line third.

But both Drew and Nascimento were penalized by ARCA officials for their missing turn 2 on the final restart. As a result, Gray was credited with his first victory of the 2021 season.

On the last-lap restart following a caution with five laps to go, Gray, having taken the green flag in third behind Drew, appeared to make contact with the No. 9 Ford going into turn 1.

Thinking he had won his first ARCA Menards race, Drew sat at the start/finish line until the call was made. The checkered flag instead was handed to Gray several minutes after he had parked his No. 17 Ford on pit road.

Drew, who led the most laps Saturday after topping the charts in both practice sessions Friday ahead of his winning the General Tire Pole Award at Portland, was credited with a 10th-place finish.

Nascimento finished behind him in 11th.

P.J. Pedroncelli, the 31-year-old who is racing full-time in the West Series this season in his family-owned No. 33 Toyota, set a new career best with his second-place finish at Portland. His previous career-best finish was third, at Sonoma Raceway (his home track) and at California’s Irwindale Speedway, both this season.

Jesse Love, the 16-year-old defending West Series champion and the points leader through six of nine events in 2021, finished third after the last-lap chaos. The result leaves Love with a 19-point advantage over second-place Drew in the championship standings with three West Series races remaining.

Joey Iest finished fourth at Portland ahead of Takuma Koga, who picked up his second top-five finish in 87 West Series races dating back to 2002.

Despite his involvement in an accident on lap 13, Drew had driven back to the lead by the time Lap 39 arrived. He held that spot until it was taken from him via ARCA’s post-race decision.

Saturday’s Portland 112, the West Series’ first event at Portland International Raceway since 2012 and the series’ sixth race at the venue overall, featured seven cautions for 21 laps.

Gray was the subject of one of those yellow flags. Leading a restart on lap 34, he got turned in turn 2. Gray lost a lap as a result of the incident, but he earned the free pass to get back on the lead lap when the next yellow flag waved on lap 43.

Gray slowly drove back to the front of the field to put himself in position for a chance to win on the final restart. Of course, the victory did not arrive in the manner by which he might have intended.

The ARCA Menards Series West will return to action Thursday, Sept. 23, for the Star Nursery 150 at the Bullring at Las Vegas Motor Speedway.