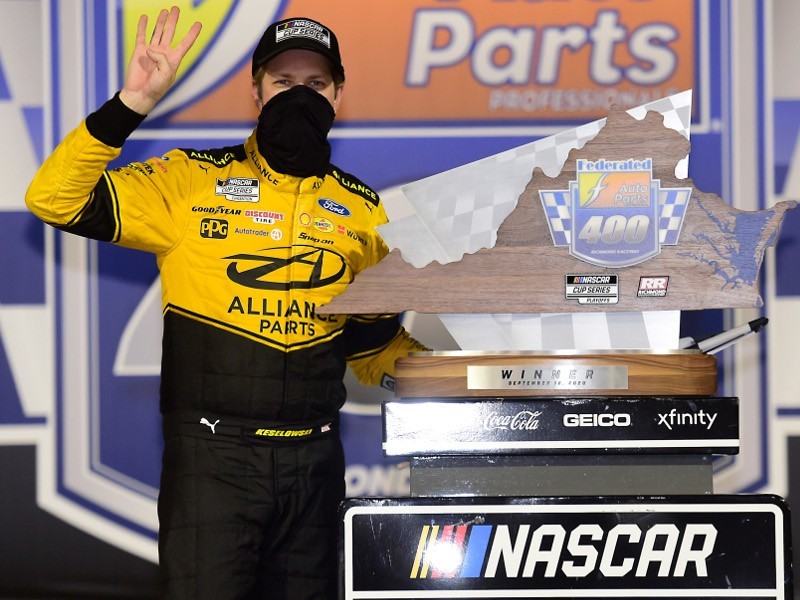 Denny Hamlin scored his first victory of the season Sunday night in the NASCAR Cup Series Playoff opener at the venerable Darlington Raceway – he and runner-up Kyle Larson combining to lead an impressive 302 of the race’s 367 laps (82 percent) in a duel reminiscent of their regular season championship battle as well.

And as dominant as the pair was last weekend, they will arrive at Richmond Raceway for Saturday night’s Federated Auto Parts 400 Salute to First Responders absolutely considered the duo to beat – again.

Hamlin, who grew up in Virginia, has three previous wins at the Richmond three-quarter mile track and Larson, who edged Hamlin for the 2021 Regular Season Championship, is a Playoff race winner (2017) there as well. He comes to Richmond with top-three finishes in 11 of the last 16 races this season.

Interestingly, several recent success stories at Richmond have centered around drivers who got off to a rough 2021 Playoff start last Sunday in Darlington. Alex Bowman, who won in the spring at Richmond, finished 26th and dealt with car issues almost from the drop of the green flag.

“Going back to Richmond is something to look forward to,” said Bowman, whose team is bringing the same No. 48 Hendrick Motorsports Chevrolet he drove to victory earlier this season.

“After last week, we need to rebound and capitalize on a good night on Saturday,” Bowman continued. “There’s not a lot of comfort going forward the next two weeks, but we are going to two places we know we can be strong at and have good runs.”

Kyle Busch, the active winningest driver at Richmond with six victories, also got off to a frustrating Playoff start, finishing 35th at Darlington.

Six of the 16 Playoff-eligible drivers finished outside the top-20 at Darlington, including three of the four Hendrick Motorsports drivers – Bowman, reigning series champion Chase Elliott (31st) and William Byron (34th).

Christopher Bell (20th), and Ryan Blaney (22nd), who had a two-race winning streak going into the Playoffs had disappointing nights, as did Michael McDowell, the Daytona 500 winner, who finished last (37th) at Darlington due to a multi-car incident.

Races this week at Richmond and next week at the traditionally dramatic Bristol Motor Speedway will determine which 12 of the 16 drivers will remain championship eligible and advance to the next round of the Playoffs. And already, the standings have been shaken and the stakes raised for the second race of the Playoffs at Richmond.

Tyler Reddick, who finished 18th at Darlington, Bowman, Kyle Busch, Byron and McDowell are now ranked 12th-16th and in those vulnerable points positions, if not must-win situations now.

A total of 10 drivers – including nine of the 16 Playoff eligible – have won at Richmond previously with Busch’s six wins tops among them. Kevin Harvick, who finished fifth on Sunday, and Hamlin each have three victories. Kurt Busch and Team Penske teammates Brad Keselowski and Joey Logano, who finished sixth, seventh and eighth at Darlington respectively, each have a pair of Richmond wins.

Last year’s Playoff race winner was Keselowski, who led a dominant 192 of the 400 laps. The top 10 in the race were all Playoff drivers.

Kyle Busch, in particular will be looking to reclaim some of that Richmond glory. And he has plenty of reason to be optimistic. His 24 top-10 and 18 top-five finishes in 31 starts are most among current drivers. He’s led at least 200 laps in four different races and earned top-10 finishes in 11 of the last 12 Richmond races, including a pair of wins and three runner-up finishes in that time. In 2018, he swept both race trophies.

The driver of the No. 18 Joe Gibbs Racing Toyota shows up in Richmond, however, with three finishes of 30th or worse in the last six races, however, including Saturday night’s frustrating showing in Darlington.

As with Hamlin, who finally earned his first trip to Victory Lane last weekend in Darlington, despite leading the championship for most of the season, Harvick arrives in Richmond ready to right his win column. The driver of the No. 4 Stewart-Haas Racing Ford won a series-best nine races in 2020, but did not advance to the Championship 4 Round. The first round of the Playoffs, however, was his best. He scored wins at Darlington and Bristol and finished seventh at Richmond.

Harvick has three wins Cup wins – and a record seven NASCAR Xfinity Series victories – at Richmond, but his last came in 2013. In the 15 races since, he has eight top fives, including runner-up finishes in 2015 and 2019. He was running among the top-five in the series’ first Richmond stop in April, but had a tire go down forcing a green flag pit stop. He remains optimistic, however, that Saturday presents a real opportunity to score in the win column for the first time this season.

“It’s definitely a unique short track,” Harvick said. “It’s got enough speed to where you have to be good under braking and have a good-handling car in order to make it through the long runs that you know you’re going to get throughout the night.

“Hopefully, we can have a good night. Based upon the first race, we should run well.”

Only two races remain to set the 12-driver NASCAR Xfinity Series Playoff grid and the Regular Season Championship remains very much up for grabs with only a single point separating five-race winner Austin Cindric and three-race winner A.J. Allmendinger.

That means there’s certainly a lot on the line in Saturday’s Go Bowling at the 0.75-mile Richmond Raceway – the Xfinity Series’ first trip to the track this season.

And to top it all off, one of the sport’s most popular drivers – ever – NASCAR Hall of Famer Dale Earnhardt, Jr. returns to the track for his annual one-race competition. With four wins in eight NASCAR Xfinity Series starts at Richmond, Earnhardt leaves the NBC television booth Saturday afternoon and climbs into his JR Motorsports team’s No. 8 Chevrolet.

His teammate, JR Motorsports driver Justin Allgaier, a two-time winner in 2021, swept both events at Richmond last year and is the only fulltime series driver with a previous win at the track. He’s finished fourth or better in the last four Richmond races and his 494 laps led is second only to Earnhardt’s 829 laps led.

“It’s gonna be a fun two weeks,” Cindric promised with a smile.

Although he has yet to win at Richmond, Cindric has been very good at the track scoring five top-10 finishes in six starts. He was runner-up in both 2019 races and led 64 laps in the Spring Richmond race last year, finishing fourth. Allmendinger, on the other hand, has only one Xfinity Series start – a 14th-place finish back in 2007. The veteran competed in 23 NASCAR Cup Series races at the track with only three top-10 finishes – his best showing a sixth place in 2014.

As productive as Allmendinger has been this year, it’s easy to forget he’s only had 51 total Xfinity Series starts in his career and that this is his first full season in Xfinity.

Conversely, the 12th and final Playoff position is also still very much up for grabs – via a new race winner who would automatically transfer in or simply the points battle between 12th place Riley Herbst and 13th place Michael Annett.

The latest driver to lock himself into the postseason is Noah Gragson, who earned his first NASCAR Xfinity Series victory of 2021 this past weekend at Darlington. He has top-10 finishes in four of his five Richmond starts, including a runner-up showing in 2018.

Gragson, as with the rest of the field, can count on a legitimate threat from his boss Earnhardt, who has been a master at Richmond. In eight Xfinity Series starts, he has four wins and seven top-10 finishes. He won three consecutive starts in three decades – 1999, 2002 and 2016 – four of five starts including a 1998 win as well.

And Earnhardt’s No. 8 carries a special nod to the September 11 race date. The Chevrolet’s paint scheme will include tributes to the people lost in the September 11, 2001 terror attacks – with the two World Trade Center Towers, the Pentagon and the Flight 93 Memorial in the design with the phrase, “Never Forget” on the quarter panels.

“It’s hard to believe it’s been 20 years since that terrible day,” Earnhardt said. “The spirit of unity and togetherness our country felt on Sept. 11 is just as relevant now as it was then. I’m honored to be driving this car and championing Unilever’s United for America” program.”