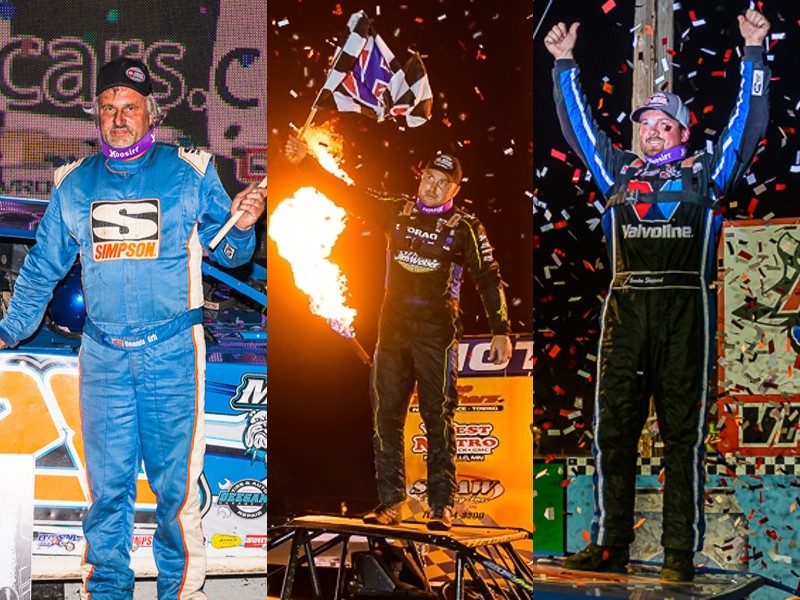 Dennis Erb, Jr., Frank Heckenast, Jr., and Brandon Sheppard were all winners on the World of Outlaws Morton Buildings Late Models tour over the weekend.

Erb, Jr. topped the field on Friday night at River Cities Speedway in Grand Forks, North Dakota, while Heckenast, Jr. was the victor at I-94 Sure Step Speedway in Fergus Falls, Minnesota on Saturday night, and Sheppard took the win on Sunday night at Red Cedar Speedway in Menomonie, Wisconsin.

The Carpentersville, Ilinois driver didn’t use his preferred inside lane, instead of going to the top en route to his third Series win of 2021. Erb made decided to stay there because of how well his car was running.

“I wanted to go back down but it felt pretty good up (top) and I wanted to keep my momentum up and I really didn’t want to break anything there,” Erb said. “I would’ve rather gotten down to the bottom, but it was working too good up top.”

For a few laps, it seemed the outside wasn’t the place to be. Jimmy Mars nosed ahead of Erb a couple of times on the bottom hoping to steal the win away.

But as both drivers inched toward the back of the field, traffic played into Erb’s favor. Most of the cars were on the bottom, giving him a clear lane on the outside.

Erb’s anticipation of traffic in front of him played a role in collecting the $10,000 prize.

“I was trying to watch the cars ahead of me as we were coming up on them because I wanted to keep my speed up and not really back out of it,” Erb said.

The win is Erb’s ninth career World of Outlaws triumph, moving him to 18th on the all-time wins list. He breaks a tie with Mike Marlar and Mars, who finished second.

Ryan Gustin finished in third, with Cade Dillard in fourth, and Brandon Sheppard in fifth.

On Saturday night, Frank Heckenast, Jr. powered around the outside of Tyler Bruening on lap 1 and held off the field for all 40 laps to claim the win and a $10,000 prize at I-94 Sure Step Speedway.

“My Dad’s been on me for years about starts, I’m one of the worst people in the world at starting a race,” Heckenast said. “With (crew member) T.C. being here and taking over the setups, I’ve been focusing on my driving and starts, and I felt like the race was won at the start.

“If Tyler (Bruening) got the lead on the first lap, I don’t know if I would’ve gotten around him.”

Despite dominating the race, he still had to deal with an assortment of slower traffic. Heckenast further demonstrated his ability as a driver to learn and adapt with how he taught himself to handle the situation.

“We ran second in a (DIRTcar Summer Nationals) race to Bobby (Pierce) and he just made all the difference in the world being aggressive in lap traffic,” Heckenast said. “(Saturday) I said every shot I get I’m going for it because it could make a difference in the race.”

The win is Heckenast’s second World of Outlaws win of the season, and third of his career.

The two drivers played a cat-and-mouse game for more than 20-laps, as Dillard tried to power past Sheppard on the inside multiple times. But Sheppard’s momentum carried him on top, keeping Dillard at bay for his fourth series win of 2021.

Sheppard knew Dillard could be a potential threat to keep him out of Victory Lane before the feature started.

“I watched (Dillard) in the heat race and I knew he was going to be tough on that top side,” Sheppard said. “He raced me really clean like he always does, and I try to do the same for him. He does a great job so congratulations to him on second place.”

The win is Sheppard’s 73rd career series triumph. He’s one victory away from tying Darrell Lanigan for second on the all-time wins list.

Sheppard also gained an advantage on his quest for a fourth Series title — extending his lead over Chris Madden to 88 points.