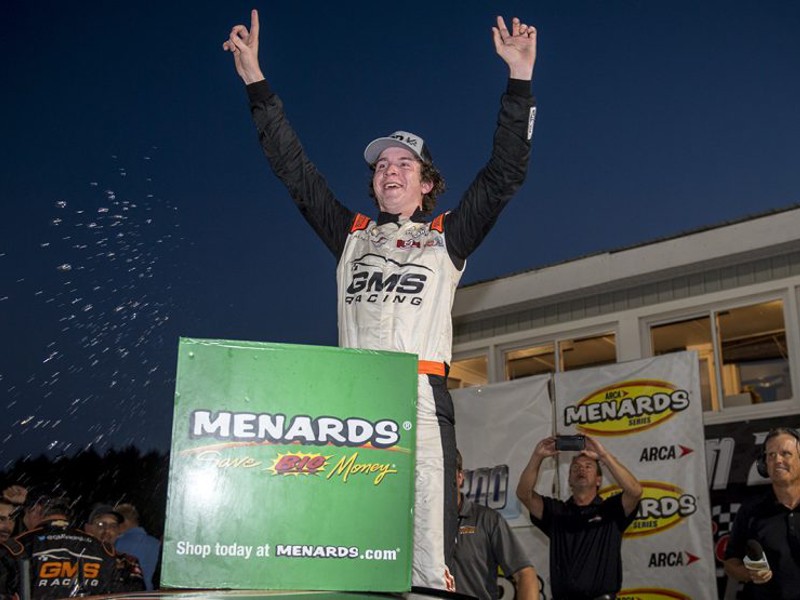 Daniel Dye became the series’ third winner in the 10th race of the season. And he did so in dominating fashion. The 17-year-old rookie started on the General Tire Pole and led all but two laps of the Zinsser SmartCoat 200 for his first victory in just his second ARCA Menards Series start.

Heim and Gibbs, who rank first and second in championship points, respectively, had won all nine races in the series this year prior to the GMS Racing driver’s triumph on the 7/16-mile paved oval.

And Dye was as surprised as anybody to find his No. 21 GMS Racing Chevrolet parked in Victory Lane at Berlin.

“I’m freaking out,” said an emotional Dye after the race. “We led every lap. Ty got into me there; I thought it was over. I don’t know. I don’t have words right now. This is crazy. Beating Ty Gibbs and Corey Heim. … It’s just unreal. It’s so cool.

“It doesn’t feel real quite yet. This is a dream come true.”

Dye, who recently signed with GMS Racing for a part-time schedule in the ARCA Menards Series through the end of 2021, managed to fend off multiple charges from Gibbs.

Lining up on Dye’s outside in second place, Gibbs on a restart with 80 laps to go challenged the leader and even initiated contact entering a corner. Dye, though, was able to collect his car and maintain the lead. Gibbs was credited with two laps led during the exchange.

Gibbs’ final effort to catch Dye on the final lap Saturday night fell short, and the latter cruised to the checkered flag with relative ease.

“(Crew chief) Chad (Bryant) just told me to think of it as a quarter midget race, and I won a lot of those things,” said Dye when asked about his mentality in the closing laps at Berlin. “He calmed me down. He kept me focused. I just kept doing the same thing every lap.”

Said Gibbs, whose second-place run at Berlin leaves him six points behind the leader Heim in the standings: “We just got beat there. Congratulations to Daniel and their team.”

A native of DeLand, Florida, Dye ran one ARCA Menards Series East race for GMS Racing last month at North Carolina’s Southern National Motorsports Park before he made his ARCA Menards Series debut for the team last week at Elko Speedway. This after he had started six East Series events for Ben Kennedy Racing dating back to last year.

Dye ran seventh at Elko despite having a top-five car, a sign he would find success with his new ride. He wasted no time doing so at Berlin, where, like most drivers in the field, he had no prior experience.

Heim, the third-place finisher, was one of the drivers who struggled all night with the oval that drives more like a circle.

“Bottom line is I just have to get better,” he said. “It took me 99 percent of the time to figure the race track out, and I feel like I finally figured it out at the very end.”

Added fourth-place finisher Taylor Gray, “This place is definitely unique. That’s an understatement. Me and Berlin did not get along very well.”

And fifth-place finisher Jesse Love when asked whether he will remember Berlin as fun, “No. I mean, I liked this place before I came here (for the weekend), and now I’m back to where I don’t like Berlin. I do like the fans, and the race track is a good race track, but it’s hard for us to like a place we didn’t run the best at.”

Saturday night’s race at Berlin served as Round 4 of the 2021 Sioux Chief Showdown, a 10-race series within the series that brings together the best of the ARCA Menards Series, the East Series and the West Series. Gibbs after the Berlin race has a five-point edge over Heim to lead the Showdown standings.

The ARCA Menards Series will return to action next week at Iowa Speedway for the Shore Lunch 150 on Saturday, July 24, a combination event with the East Series and another Sioux Chief Showdown race.