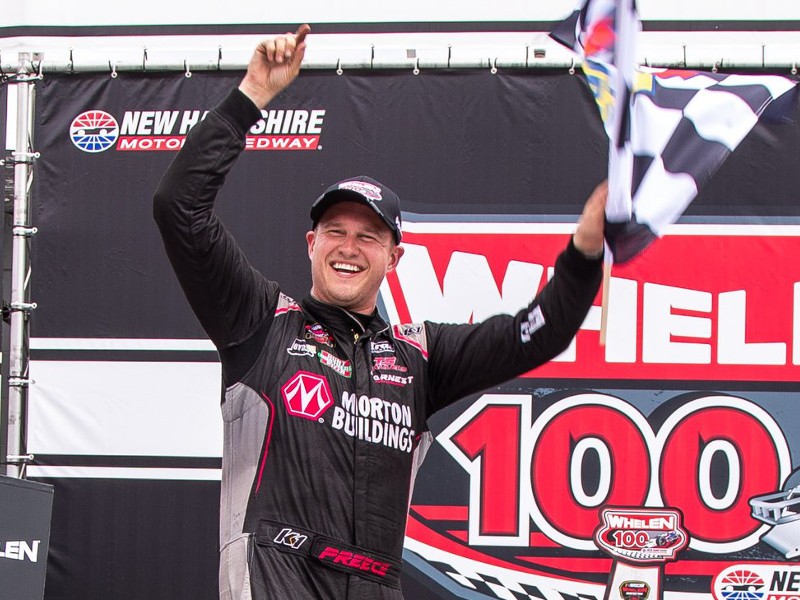 Ryan Preece finally got the win he’d been hoping for.

On a last-lap overtime dive to the outside in turns 3 and 4, Preece sprinted around Ron Silk and Justin Bonsignore to go from third to first to win the NASCAR Whelen Modified Tour’s Whelen 100 at New Hampshire Motor Speedway on Saturday afternoon.

Preece was showered in cheers by the crowd after the native New Englander put on an incredible show.

“I’m from Berlin, Connecticut, born and raised, and I have my local tracks in Connecticut,” Preece said. ‘But when it comes to the big three (national touring series) and the Cup Series, this is the only track that’s two and a half hours away. … But this is New England. and all of us New Englanders, we’re kind of our own breed. It’s just really cool to win in front of them all.”

The race was pushed to overtime when J.B. Fortin and Eric Goodale collided on the front straightaway with two laps to go, setting Silk and Preece on the front row for the final restart.

In a backup car following a crash in Saturday morning’s practice, Silk got the jump on the restart with a massive push from Bonsignore into turn 1. The No. 85 of Silk shot to the lead but had the field strong in tow, thanks to the effect of the draft.

Silk led to the white flag, but Bonsignore had an outstanding run off turn 2. He darted to the inside, but Silk hung a left to defend. Preece, meanwhile, held his line against the outside wall while the two leaders lost momentum.

Bonsignore jumped out to lead for a brief moment, but Preece rocketed around both drivers to launch to his first win at the “Magic Mile.”

“I can play it back in my head probably a billion times and probably do 10 different things off of turn 2, but that’s the move you think you got to make,’ Bonsignore said. “And Ronnie did exactly what I would have done as the leader and probably stalled us both out too much and then Ryan got a good run.”

Bonsignore also elected not to take fuel when the caution fell at lap 74, choosing to take tires and track position instead. Off Turn 4 on the final lap, Bonsignore said the engine stumbled, hindering any momentum coming back to the checkered flag.

In third place, Silk completed an impressive effort in a backup car that had zero practice laps on it and just two qualifying circuits before Saturday’s contest.

“All you can do at this place is put yourself in a position to win at the end and then it kind of just falls where it falls,” Silk said. “But yeah, to have zero laps of practice on this car and have a good run like that, it’s really good.”

The race kicked off with a caution on lap 1 when Matt Swanson drifted wide off turn 4 and contacted the outside wall. As the field scattered around him, Max McLaughlin was turned into the outside wall, and both drivers’ days ended early.

After a lengthy cleanup period, the race got back underway at lap 12, kicking off a long 62-lap green-flag run.

The front end of that run featured incredible fights for the lead between Bonsignore and Preece, who traded the lead seemingly every other lap as the draft came into play.

“It’s always fun,” Bonsignore said. “We understand what each other is trying to do. You can’t be tucked up behind the guy for too many laps. Otherwise, you start to run hot. So it’s more of a game of just ‘Hey, I need to lead to cool the motor back off and lead three, four laps and get the lead back.’ But at the same time you want to be the leader because if the caution comes out, you want to make sure you’re lined up as the leader, so it’s a game of cat and mouse.”

Bonsignore held the lead at the lap 74 caution, which flew for Bryan Dauzat’s failed engine, and elected to take tires only while the majority of the leaders pitted for both fuel and tires.

At lap 93, Tyler Rypkema suffered a right-rear tire puncture heading into turn 1 and spun driver-side into the outside wall before climbing out under his own power.

That set up a restart with four to go, leading to the eventual contact between Fortin and Goodale.

Patrick Emerling entered Saturday’s race with a three-point lead over Bonsignore in the championship standings but instead left with a disappointing 13th-place finish, at one point losing a lap to Bonsignore.

Doug Coby came into Saturday’s race fourth in points 41 points out despite missing the event at Oswego Speedway, but a blown motor ended the six-time champion’s day after just 44 laps.