Gainesville 101: A primer of 200 years of the city's history 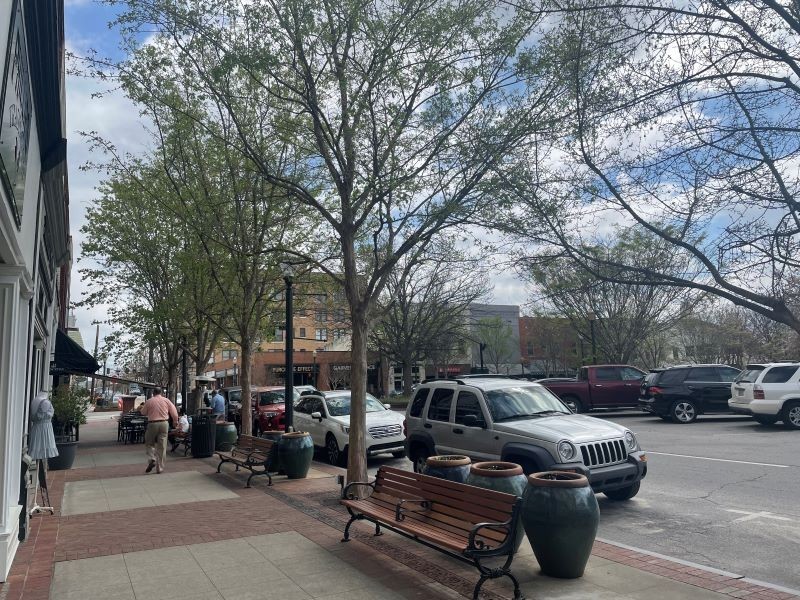 Gainesville is celebrating its 200th anniversary this year and the city has come a long way, according to local historians.

The location of Gainesville was chosen because of a natural geographical occurrence that created two crossing ridge-top trails, according to Historic Gainesville & Hall County: An Illustrated History, by William L. Norton Jr. A spring, known as Mule Camp Springs, was also nearby, providing people with the opportunity to camp and trade goods.

Native Americans, specifically those in the Cherokee Nation, used the area for the same purpose until their removal west by the United States government in 1838.

Hall County was established in 1818 and Glen Kyle, executive director at the Northeast Georgia History Center, said it became the place where the cultures of the white settlers and Native Americans came together.

“In 1818, Georgia wasn't really what it is today,” Kyle said. “It was sort of squished over to the east, the population was low and it was the last of the 13 colonies to be established. So, it wasn't the huge state that it is today. Much of it was still in the hands of Native Americans.”

The county needed a seat of government, so the area was chosen and incorporated in 1821 as Gainesville.

The city got its name in honor of General Edmund Pendleton Gaines, who Kyle said was an officer in the War of 1812 who became a very prominent officer in the US military in the 1820s and the 1830s.

ORIGINS OF THE SQUARE

The center of the town was located roughly 200 yards north of the spring to avoid the soggy ground and persistent mosquitoes, according to Historic Gainesville & Hall County: An Illustrated History.

A surveyor from Alabama by the name of Timothy Terrell IV laid out the town in a classical grid pattern. Kyle said the land was divided into lots and sold, with some set aside for churches and schools.

“All those lots, even today on the square, originally started out as just rectangular pieces of property,” Kyle said. “For example, where the Dixie Hunt Hotel is now, that was land lot number one.”

A large open area measuring 300 square feet was allocated for the center of the new town, and thus, the Gainesville square was born.

RELATIONSHIP WITH THE CHEROKEE

When Gainesville was first formed, Kyle said the Cherokee Nation was in the middle of what scholars call the Cherokee Renaissance.

“Playing the game” entailed wearing similar clothing to those settling in Gainesville, as well as engaging in agriculture and shifting from a matriarchal to a patriarchal social structure.

However, conflict began when gold was discovered in the region in 1828 and that conflict led to the Indian Removal Act of 1830 and the expulsion of the Cherokees in 1838.

The verdict was appealed to the U.S. Supreme Court which reversed its opinion, ruling that Georgia had no jurisdiction over the Cherokee Indian Territory. However, the Georgia governor and local authorities carried out the original sentence and Tassel was hanged on Dec. 24, 1830, two blocks south of the square.

The execution became a landmark case for U.S. Indian Affairs.

The Gainesville square steadily grew throughout the 1830s and 1840s, with wooden buildings popping up along boarded sidewalks with hitching posts.

In 1851, however, the city was destroyed by a fire. Kyle said the fire swept through downtown Gainesville and more or less destroyed every single structure.

“In a town that was only 30 years old, [the fire] very well could have ended it,” Kyle said. “… Gainesville, at that point, was becoming a more important town in terms of trade and commerce and government, and so it was rebuilt.”

Kyle said the fire and subsequent rebuilding did provide an opportunity for the town to have more consistency in the placement and aesthetics of the buildings.

“There was a lot more uniformity and sort of, you might say… more of a city planning approach,” Kyle said.

THE CIVIL WAR AND SUBSEQUENT GROWTH

The square prospered during the Civil War because there was no railroad and the area had little strategic value, according to Historic Gainesville & Hall County.

Kyle said there were “strong Union sentiments” in Northeast Georgia and Hall County voted against succession.

After railroads were constructed, hotels began popping up for those who were drawn to the area’s various springs, like White Sulphur Spring, the Hudson House the Richmond and more.

After 1872, the rail connections allowed for significant economic growth in Gainesville. Those who grew a surplus of crops no longer had to take them by wagon to the markets, they just had to bring them to Gainesville.

“That makes Gainesville the transportation center of the entire region, makes it the political center, the economic center banking center and the merchandise center,” Kyle said.

The city assumed its new role as the “Queen City of the Mountains” by the end of the Civil War.

Brenau University began in 1878 as Georgia Baptist Female Seminary, a college for women. Kyle said the formation of schools like Brenau began because of the economic growth caused by the railroads.

“When folks start to have a better life and start to succeed economically, they want better and more opportunities for their children,” Kyle said.

Gainesville continued making important advancements throughout the early 1900s, such as paving the square and adjoining streets in 1909, opening the post office in 1910 and opening the city’s first skyscraper, the Jackson building, in 1915.

Around 30 years later, on April 6, 1936, the fifth deadliest tornado in United States history hit the city of Gainesville, killing 203 people and injuring 1,600.

The two main funnel clouds came together near downtown and then spawned a third tornado near Brenau. Around 750 homes were destroyed, and the damage in Gainesville totaled about $12,500,000.

POULTRY CAPITAL OF THE WORLD

“What he does, is take some lessons from folks like Henry Ford, and John D. Rockefeller and applies them to chickens,” Kyle said.

Jewell utilized vertical integration, meaning he combined every part of the process into one company.

“From the eggs, from the feed, from the trucks that haul them both to the chicken houses to the processing centers, to freezer trucks to packaging, everything,” Kyle said.

The growth of the poultry industry also led to a large Hispanic population in Gainesville. Word got out that there were lots of job openings in the processing plants and those who immigrated gravitated toward the opportunity.

“That's one of the great things about Gainesville,” Kyle said. “It's always provided some sort of growth, or some sort of opportunity, for people who come here.”

DECLINE OF THE SQUARE

By 1960, activity on the square was declining. Kyle said that was in part due to the growth of the poultry industry.

“You can't put a gigantic chicken processing plant or chicken houses right there on the square,” Kyle said. “…The only way to get that space is to move further and further out of town, or at least out of downtown.”

Businesses were also moving to other locations. Those who remained posted a full-page ad in the Gainesville Daily Times in Nov. 24, 1963, with a list of downtown businesses. The ad urged people to “shop at the following downtown Gainesville merchants for complete satisfaction.”

REVIVAL OF THE SQUARE

In recent history, those with the city of Gainesville have worked to revitalize the square with a variety of projects.

Angela Sheppard, assistant city manager, said the lull led to a redesign of the square in the 1990s including the creation of the Main Street program.

“The square has always been, you know, the heart of the city and I think people have always had an interest in making sure it's active,” Sheppard said.

Sheppard said redoing the parking deck 10 years ago was a huge help along with the renovation of the Roosevelt Square around five years ago. She also said the Renaissance project will “take the square to a new level.”