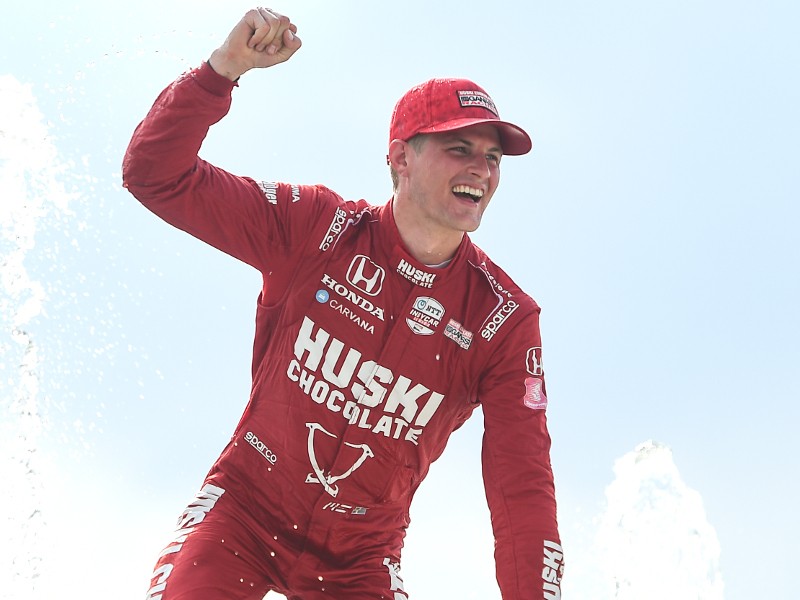 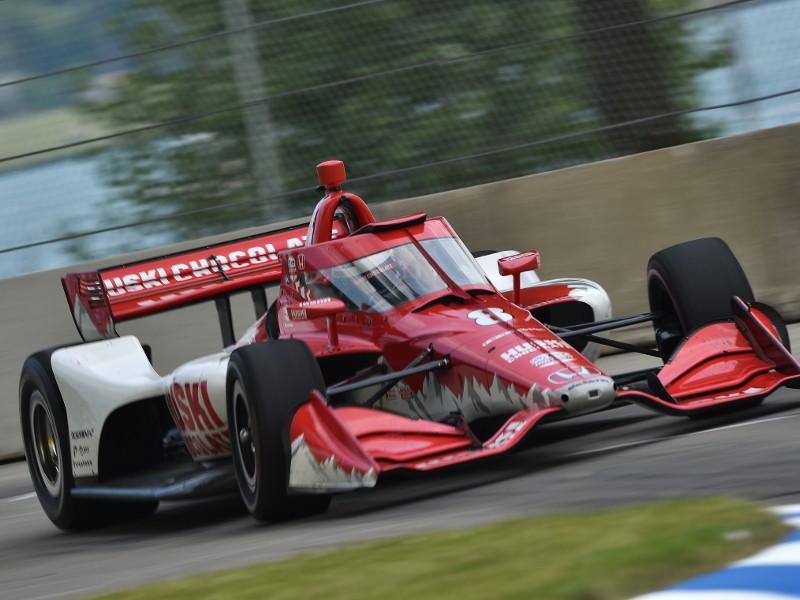 In one of the most unpredictable NTT IndyCar Series seasons ever, Marcus Ericsson pulled off one of the more improbable victories in recent memory in Race 1 of the Chevrolet Dual at Detroit to earn his first career series victory.

Ericsson held off Rinus VeeKay and Pato O’Ward in a three-lap dash to the checkered flag after the second red flag of the event. Ericsson was in second place in the No. 8 Honda when cars entered pit road for the red-flag period caused when Romain Grosjean with six laps to go.

But Ericsson took the lead on pit lane when the No. 12 Chevrolet of leader Will Power would not restart after the red flag period on a humid, sunny day with an air temperature of 80 degrees. That apparent electrical control unit malfunction completed Ericsson’s charge from a disappointing 15th starting position, as the last five laps of the race – including two under caution – were the only circuits Ericsson led all day.

Swedish driver Ericsson pulled away from VeeKay over the closing three laps under green of the 70-lap race, winning by 1.7290 seconds at an average speed of 93.509 mph. NTT P1 Award winner O’Ward was third, 1.9105 seconds behind Ericsson.

“For once, things fell my way,” Ericsson said. “It feels really good. For Will, I feel really bad for him with the way it ended for him. He did a tremendous job today. But it was my day today, and it was about time.”

Formula One veteran Ericsson also became the seventh different winner in the first seven races this season, a feat last achieved in 2017 and a milestone reached only in five prior seasons in the series’ century-long history. He is the fourth first-time career winner in 2021, joining Alex Palou, O’Ward and VeeKay.

Power and Ericsson were the dominant drivers in the closing stages of the race. Less than a second separated them once Power took the top spot on lap 54 when leaders Rahal and RLL teammate Santino Ferrucci – on a different pit stop cycle – pitted on lap 53.

A hotly anticipated closing duel between Power and Ericsson vanished when Grosjean hit the wall in turn 9 on lap 64. Series officials decided to halt the race under red-flag conditions, with all cars entering the pits. After a break of seven minutes, 29 seconds, the race resumed – without Power at the front of the field.

His ECU apparently malfunctioned, and his Team Penske crew could not start the car. The crew quickly installed a new ECU, and a dejected Power returned to the track and finished 20th, three laps down.

Before the late-race drama, the event quickly unfolded into a strategic duel with two clear paths.

One group of drivers pitted within the first five laps to shed the grippy Firestone alternate “red” tires for the increased durability of the Firestone primary “black” tires, choosing a three-stop strategy. O’Ward and VeeKay were among the drivers to choose this option.

The other group of drivers elected to start and stay on the Firestone reds for as long as possible before switching to their primary tires. Ericsson, Power and Sato were among the drivers who chose this option.

Then there was reigning and six-time series champion Scott Dixon and James Hinchcliffe. They were among just four of the 25 drivers who elected to start on primary tires, and they stayed out as long as possible to stretch fuel and tire wear into a two-stop race.

But that strategy – and those of the drivers who pitted early to make this a three-stop race – sailed into the Detroit River when Felix Rosenqvist crashed heavily in turn 6 on lap 25. The throttle on Rosenqvist’s No. 7 Chevrolet appeared to stick open, and he made heavy contact with the tire barrier and concrete barrier.

Rosenqvist’s No. 7 Chevrolet speared nose-first into the tire wall and concrete barrier in turn 6, with an apparent stuck throttle. Rosenqvist was removed from the car by the AMR IndyCar Safety Team, and he was transported to the infield care center for preliminary evaluation and then transported to a local hospital for more detailed evaluation, according to INDYCAR Medical Director Dr. Geoffrey Billows. Rosenqvist was conscious, alert and talking throughout, Billows said.

The heavy impact forced the race to be stopped with a red flag while Rosenqvist was removed from his car and the concrete barrier and tire wall were rebuilt.

Racing resumed after a red-flag delay of one hour, 18 minutes. Dixon and Hinchcliffe had to make their first pit stops for fuel immediately, and many drivers who pitted early to switch to primary tires also dove into the pits under yellow for fuel and tires.

That reshuffling placed Power, Ericsson and Sato into the top three on the restart on Lap 30 after the red flag. VeeKay quickly passed Sato for third and joined Power and Ericsson in a three-way joust for the lead by lap 36.

It was a tough day for the top two drivers in the standings entering this race, Chip Ganassi Racing teammates Palou and Dixon. Palou finished 15th after starting last in the 25-car field, while Dixon ended up eighth.

Palou led Dixon by 36 points entering this event, but that lead was sliced to just 15 over O’Ward, who leaped over Dixon into second. Palou has 263 points, O’Ward 248 and Dixon 237. VeeKay is fourth with 231.

Live coverage of Race 2 of this doubleheader weekend, another 70-lap event, starts at noon (ET) Sunday on NBC and the INDYCAR Radio Network.