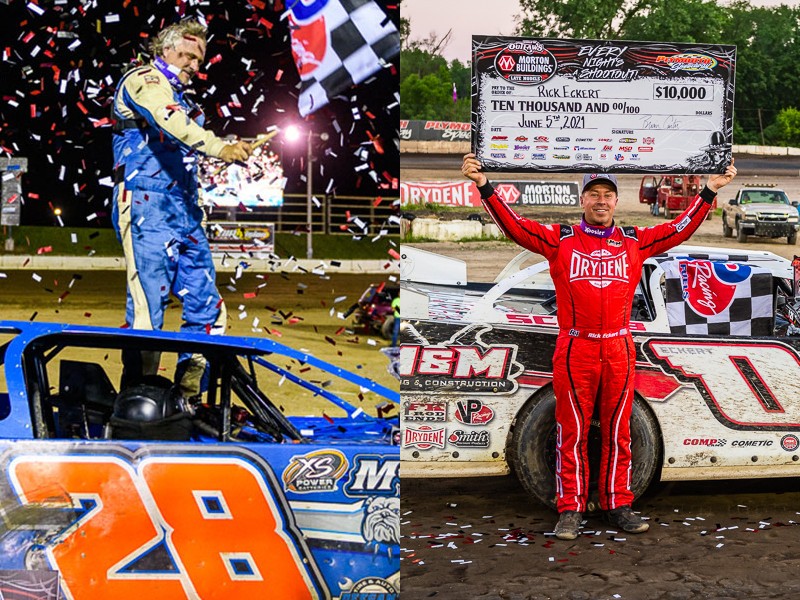 Erb, Jr. was victorious on Friday night at Circle City Raceway in Indianapolis, Indiana, while Eckert took the win on Saturday night at Indiana’s Plymouth Speedway.

On Friday night, Erb, Jr. earned his first series feture win of the 2021 season, picking up a $10,000 pay day in the process at Circle City Raceway.

Erb led the first 25 laps before Ryan Gustin powered around him on the outside for the top spot. But a yellow flag gave Erb another shot.

Erb and Gustin raced side-by-side for four laps on the restart, wrestling back-and-forth for the lead. That’s when Erb slid up in front of Gustin coming out of turn 4 and reclaimed the lead for good with eight laps to go.

“Everything held together,” Erb said. “We lost the lead for a little bit, but I knew I could get right back in it. We had a good car going through the (track) but man we had to work for it.”

It’s the seventh series win of Erb’s career, tying him for 20th all-time with Brian Birkhofer and Jonathan Davenport.

Brandon Sheppard finished in second, with Gustin in third, Max Blair in fourth and Frank Heckenast Jr. in fifth.

On Saturday night, Eckert led all 40-laps of the race, but he didn’t dominate. The York, Pennsylvania driver had to think quickly in lap traffic while holding off challenges from Frank Heckenast, Jr.

Heckenast tried crossing Eckert over several times on the back straightaway but didn’t have the momentum he needed after charging to the bottom off turn 2.

Heckenast made several attempts to steal the top spot, but Eckert was focused on getting through traffic ahead of him.

“It’s awesome to go almost all the way green, but traffic is tough,” Eckert said. “One time I saw a nose and I wasn’t sure if it was (Heckenast) or a lap car, but it didn’t matter anyway because I was going (to the top).

“I was just trying to chase traction and chase where there was a hole. I never raced behind me; I was on offense the whole time trying to get through the traffic.”

Heckenast finished in second, with Tyler Bruening, Sheppard and Gustin rounding out the top five.