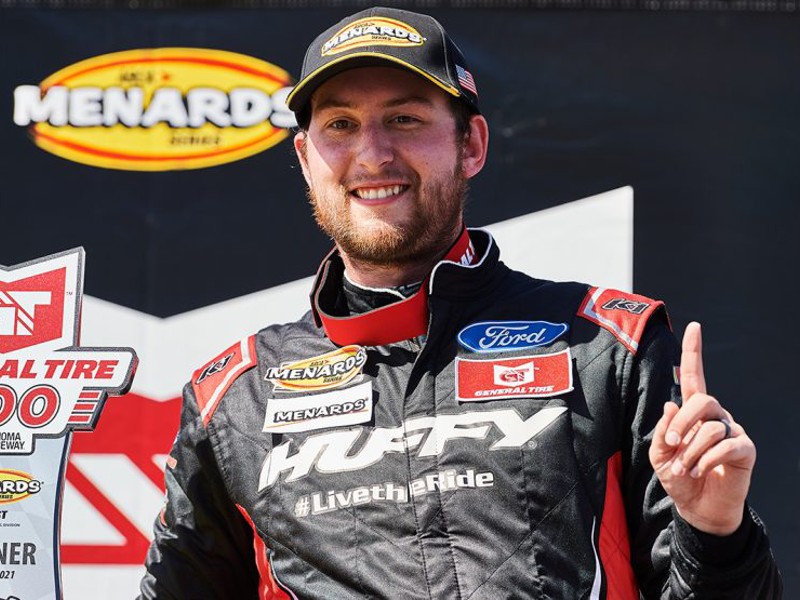 Chase Briscoe entered Saturday’s General Tire 200 at Sonoma Raceway for the ARCA Menards Series West primarily because the NASCAR Cup Series regular needed practice for Sunday’s Toyota / Save Mart 350 on a track at which he had never raced.

The 26-year-old indeed logged plenty of repetitions on the 12-turn, 2.52-mile road course as he dominated the second West Series race of the 2021 season.

For Briscoe, though, the General Tire 200 was all about preparation for Sunday’s Cup Series race.

“It’s a really cool place,” said Briscoe of Sonoma Raceway. “I’ve never been out here. With no Cup practice or qualifying, it was kind of crucial to come run this race. I feel like I learned a lot just going out there and running 50 laps today and just learning the race track.”

Briscoe took the lead early Saturday and never gave it up despite a series of late cautions.

Dylan Lupton, the former West Series regular who now dabbles in NASCAR’s national series, finished second at Sonoma driving for Bill McAnally Racing. It was his first West race since he finished second in the 2014 series standings.

“Overall it was a good day,” allowed Lupton. “We wanted one spot better, but Chase was really good out there.”

P.J. Pedroncelli, the Sonoma native who has raced part-time in the West Series since 2008, finished third Saturday, easily a new career best. Prior to the General Tire 200, Pedroncelli had not earned a top-10 finish in 13 West Series starts.

Pedroncelli also raced alongside his father Paul on Saturday. Paul Pedroncelli finished 13th in his first race on the ARCA Menards platform.

“We didn’t have a very fast qualifying car,” said P.J. Pedroncelli, who started 14th. “But I knew we had a long-term thing. We saved our stuff, and it paid off in the end.”

Cole Moore finished fourth. Todd Souza, who was forced to battle back from a pass-through penalty after he jumped the green flag at the start of the race, finished fifth.

Jesse Love, who left the 2021 West opener at Phoenix in March as the highest finishing series regular, had a rough day at Sonoma. He was involved in multiple incidents, and a gear issue compounded his issues, leading to a 19th-place finish.

NASCAR Truck Series regular Zane Smith, who entered Saturday’s race after crashing on the first lap of the West opener at Phoenix, suffered more bad luck at Sonoma. He blew an engine on the pace lap and finished 22nd.

By virtue of his eighth-place finish at Phoenix and his fifth-place run Saturday, Souza left Sonoma as the ARCA Menards Series West points leader.

The West Series returns to action Saturday, July 3, for the NAPA Auto Parts 150 at Irwindale Speedway.