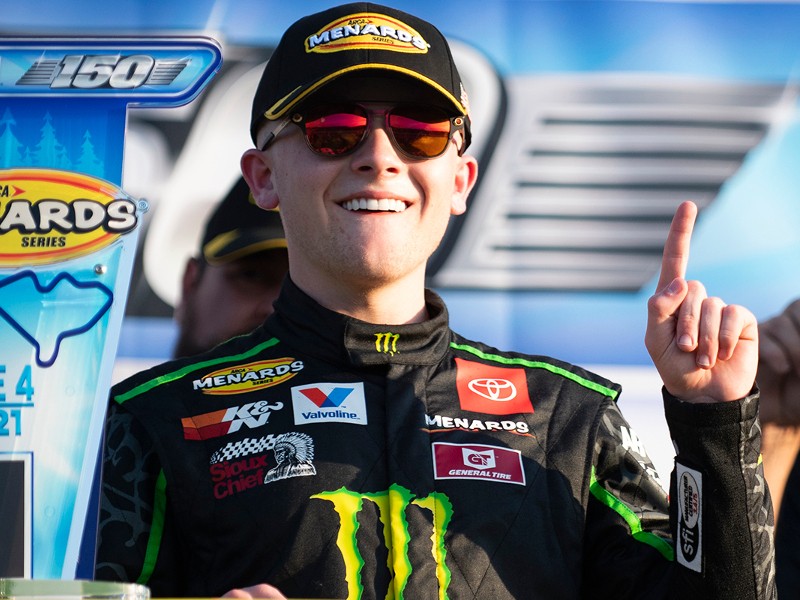 One of Ty Gibbs’ streaks in the ARCA Menards Series ended Friday, when he failed to earn his sixth consecutive General Tire Pole Award and qualified second for the Dawn 150 at Mid Ohio Sports Car Course.

But the 18-year-old driver of the No. 18 Joe Gibbs Racing Toyota extended the more important streak and won his fourth ARCA Menards Series race in a row, again in dominating fashion.

Gibbs has now won five of the seven races the series has contested in 2021. He took the lead at Mid-Ohio on Lap 7 and, with the exception of one lap, led the rest of the way on the 13-turn, 2.258-mile road course.

“It means a lot to win ARCA’s 1,500th race, it’s a wonderful series,” said Gibbs. “Overall, it was a really good day. We had to fight. Had a good restart and just took off from there.”

Corey Heim, who logged the best time in Friday’s qualifying session to earn the first General Tire Pole Award of his career, lost the lead to Brandon Jones on Lap 4.

It was only the beginning of a stretch of trouble for Heim.

Heim took the lead on a restart with 20 laps to go, but he was issued a pass-through penalty for jumping the green. While serving that pass-through, he was caught speeding on pit road and handed another penalty.

Heim finished seventh, his worst result of the year. But thanks to the point he earned for winning the General Tire Pole Award at Mid-Ohio, he still has a one-point lead on Gibbs in the championship standings through seven races.

“My Venturini Motorsports Camry today was really good,” said Heim. “We came a long way. We were a little off in practice. I feel like we could have competed for the win at the end there. Just unfortunate.”

NASCAR Camping World Truck Series regular Austin Hill finished second at Mid-Ohio in his fourth ARCA Menards Series start. He closed on Gibbs during the last green-flag run of the race before the eventual winner pulled away late.

Kok earned a top-10 finish in his first ARCA Menards Series race. It also was the first race in the United States for the Durban, South Africa, native.

Gibbs’ win also extends his lead in the 2021 Sioux Chief Showdown, as the Dawn 150 was the second of 10 races on that series’ slate for the season.

The ARCA Menards Series returns to action on June 25 at Pocono Raceway.