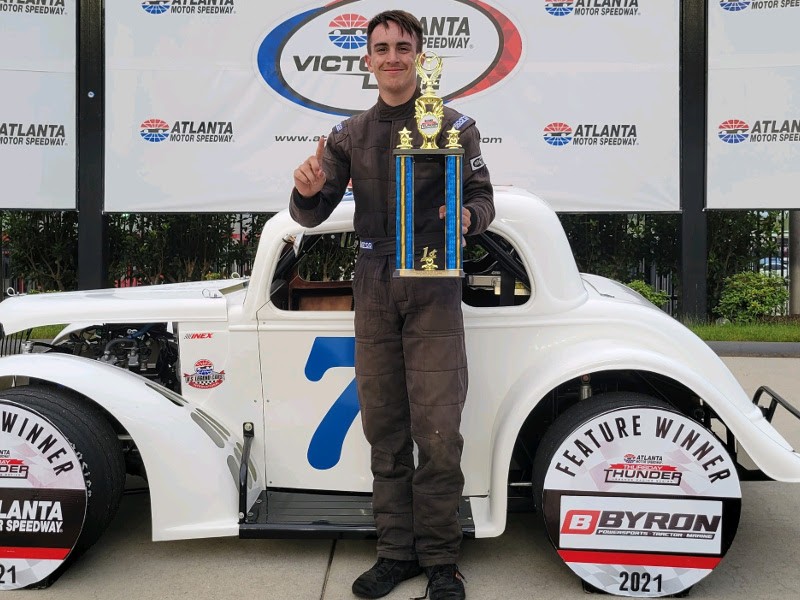 This was most apparent in the The Byron Powersports Semi Pro feature. Michael Gannon led right out of the gate, but was trailed throughout the race by Nathan Jackson. Initially, it appeared that it would be a dominating win for Gannon after he led for the greater half of the race, but Jackson continued to be patient, waiting for an opportunity. Finally, on lap 17, Jackson passed Gannon off of turn 1 and held off Gannon’s aggressiveness for the final 3 laps to claim the victory.

Earlier in the evening, the Outlaw feature provided an intense game of back and forth, as the race unfolded. Clay Hocutt started on the pole, but was immediately challenged by Garrett Erwin. Hocutt and Erwin battled it out until Hocutt got into his groove towards the second half of the race. A caution shortened Hocutt’s lead, but once the green flag flew again, he went on to win by a few car lengths over Erwin.

In the WJP Investments Young Lions feature, Aiden Garcia sat third as the race got underway, although he would not stay there long. Garcia made a strategic move from the start and dominated as Parker Eatmon, who finished second, and Giovanni Ruggiero, who finished third, chased the leader.

The Masters feature had many lead changes, but it was Mark Swan who claimed victory after time restraints resulted in a 9 lap race.

The night was capped by the The Associates Group Pro Legends race. which entailed 25 laps of high speed action. Timothy Watson got off to a commanding lead, but his lead shortened as cautions ensued. Caleb Healy gave him a run, but it was no match for Watson’s speed as he won comfortably in a commanding performance.

Other winners on the night included Hudson Canipe in Bandits, Lane Mueller in FR8Auctions Rookie Bandoleros and Ryan Younginer in Chargers.

For more information on the Thursday Thunder Series, visit visit AtlantaMotorSpeedway.com or LegendsOfGa.com.