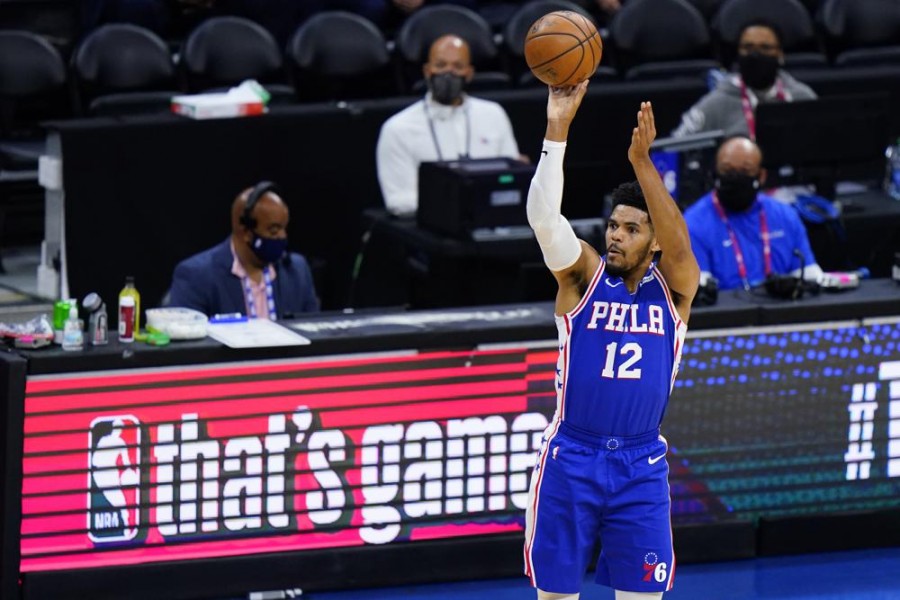 PHILADELPHIA — Dwight Howard gushed over his first year in Philly, a train-of-thought review on his favorite cheesesteak spot and the dairy dessert the Sixers give away at home games, and he even hummed a few bars to the team’s theme song.

But when the topic turned to Joel Embiid, Howard’s belief that the injured big man can play in Game 1 of Philadelphia's second-round playoff series against Atlanta brought the laughter to a halt.

“He should be ready to go,” Howard said.

Wait a minute, is the backup center — and one of the top rebounders in NBA history — really breaking news on Embiid’s status for Sunday's game against the Hawks.

Pressed for the scoop that Embiid actually will play, Howard suddenly backtracked on his breaking news update.

“Oh, nooooooo, you didn’t hear me say that one,” Howard said. “I expect him to be great when he plays. That’s all.”

That’s all the Sixers expect, as well, but Embiid’s status remained unknown Saturday because of a cartilage tear in his right knee. The top-seeded Sixers could get past Trae Young and the Hawks even without a healthy Embiid. But the Sixers’ serious push for their first championship since 1983 starts and ends with the health of their MVP candidate.

The 27-year-old Embiid averaged 28.5 points and 10.6 rebounds this season. He scored a postseason career-high 36 points in 28 minutes in a 29-point win for the 76ers in Game 3 over Washington. Embiid took a hard fall in Game 4 on Monday — he winced and put his hand on his lower right back — and missed the series clincher two days later. He’s been treated with physical therapy.

The Sixers may make the Hawks wait until the last moment to reveal Embiid’s status.

“He’s a big piece of his team,” Young said. “If he’s not able to go, they’re a different type of team. We’re definitely preparing like he’s going to be ready.”

Coach Doc Rivers, who definitively said Embiid was injured in Game 4, had no new update on Saturday.

Embiid could slap on a knee brace and push through the injury, and there are signs he might try to play this series. He did not participate in live drills during practice this week but did shoot. He made a surprise appearance during Game 5 warmups and shot jumpers around the perimeter, fadeaways, even some free throws — all without any sort of noticeable knee brace under his white leggings — to the delight of the crowd.

With Embiid, the Sixers are legitimate contenders to win it all.

Without him, the Sixers need every ounce of effort from Ben Simmons, Tobias Harris and Seth Curry to push past the fifth-seeded Hawks. The Sixers started Matisse Thybulle and moved Simmons to center against the Wizards.

“I think we’ve got the pieces in place to do it,” Simmons said. “We’ve been in this situation before during the season. We didn’t have a full team the whole time. We know what we have to do and it starts on defense.”

Young was a New York tabloid sensation as the confident point guard tormented the Knicks, and he expected to rile up a Philly crowd that had 15,000-plus fans for Game 5 and always loves giving the latest villain a hard time.

“I’m motivated regardless of what anybody says about me in the game,” Young said. “Obviously, a crowd gets guys going. But I’m already motivated a lot. It doesn’t really boost me. But it kind of does a little bit, I guess.”

The Hawks, in the playoffs for the first time since 2017, reached the second round by beating the Knicks in five games. Just 14-20 when they fired Lloyd Pierce on March 1, the Hawks are 32-12 since. They had the best record in the East after Nate McMillan took over, and Young said he isn’t satisfied with just one series victory.

He averaged 29.2 points and 9.8 assists in the first round. He closed it out with 36 points and nine assists, bowing to the New York crowd that had jeered him in every game after hitting a 3-pointer with under a minute to play.

“I really saw the Trae that I’ve seen all season long,” McMillan said. “He played with a lot of confidence, showed some growth in running the team. The guy that we caw in the playoffs was the guy I’ve been seeing all season long. He played with a great deal of confidence. He did a good job establishing our tempo for us. A really good job of managing the game in those four games we won.”

Young is averaging 27.1 points against the Sixers in nine career games. Simmons, an NBA defensive player of the year candidate, likely will get the assignment of shutting down Young.

The Sixers went 2-1 against Atlanta this season, with both wins in April. The home team won every game, and the Sixers face the Hawks in the playoffs for the first time since 1982.

The Sixers won their games this season by 44 points and 22 points. Atlanta’s Bogdan Bogdanovic missed all three games with a knee injury.

“Hard to take a lot from those games,” McMillan said.

The Hawks are trying to advance past the second round for only the second time since moving from St. Louis to Atlanta in 1968. During the 2014-15 season, they went 60-22 and were the top-seeded team in the East. After winning their first two playoff series, they were swept by LeBron James and Cavaliers in the Eastern Conference final.

The Sixers have not made the Eastern Conference final since 2001. 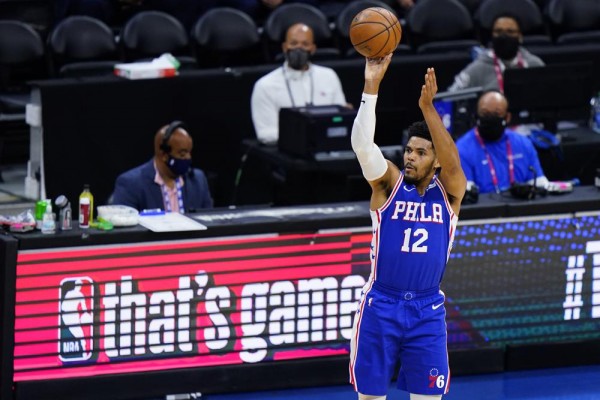 Embiid's status uncertain for Game 1 vs. Hawks
Joel Embiid’s status remained unknown Saturday because of a cartilage tear in his right knee as the Philadelphia 76ers and the Atlanta Hawks get ready to open their second series... 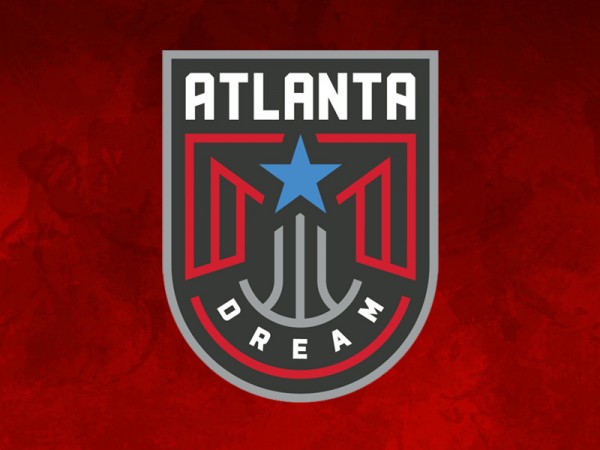 Collier leads Dream to road win over Lynx
Napheesa Collier scored 26 points and made two free throws with 1.5 seconds remaining in the Minnesota Lynx's 86-84 victory over the Atlanta Dream on Friday night... 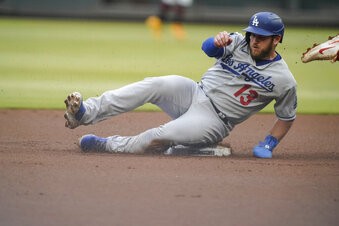 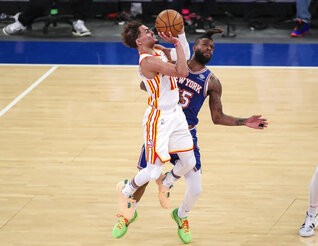 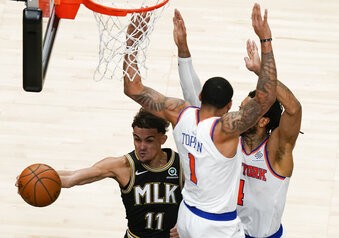 Atlanta's Trae Young shines in first trip to NBA playoffs
When the Atlanta Hawks were excluded from the bubble last summer, Trae Young stewed at home.
By Paul Newberry 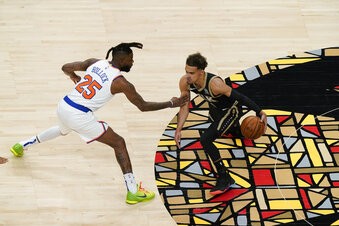 Hawks take 3-1 series lead over Knicks
Trae Young scored 27 points, John Collins added 22 despite a smack to the lip and the Hawks frustrated Julius Randle and the New York Knicks once again, pulling away in the second half for a 113-96 victory Sunday that gave Atlanta a commanding 3-1 lead in the series...
By Paul Newberry AP Sports Writer 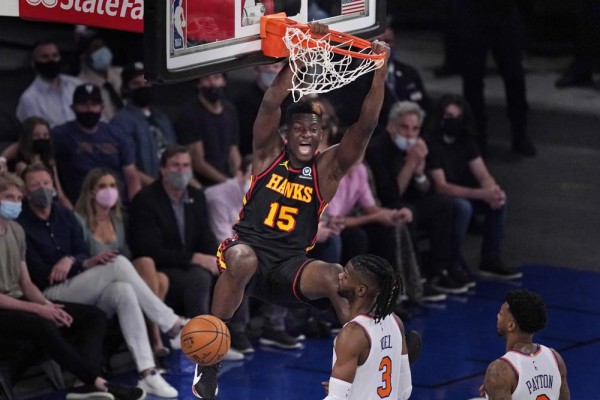 Young buzzer-beater lifts Hawks past Knicks
Trae Young made a runner in the lane with 0.9 seconds left to give the Atlanta Hawks a 107-105 victory over the New York Knicks on Sunday night in a thrilling postseason return for both teams...
By Brian Mahoney AP Basketball Writer 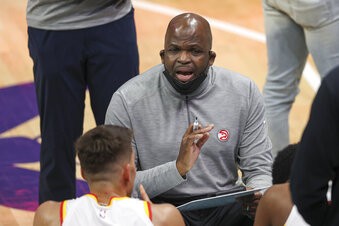 McMillan transforms Hawks, now looks to win in playoffs
Nate McMillan gives a glimpse of his coaching style when he talks about his playing days. He never cared about the accolades.
By Paul Newberry
Privacy | User Agreement | Contact | Advertise With Us
2021 © Jacobs Media Corporation. All rights reserved. EEO Report. Website by Full Media
Login / My Access
close
Search