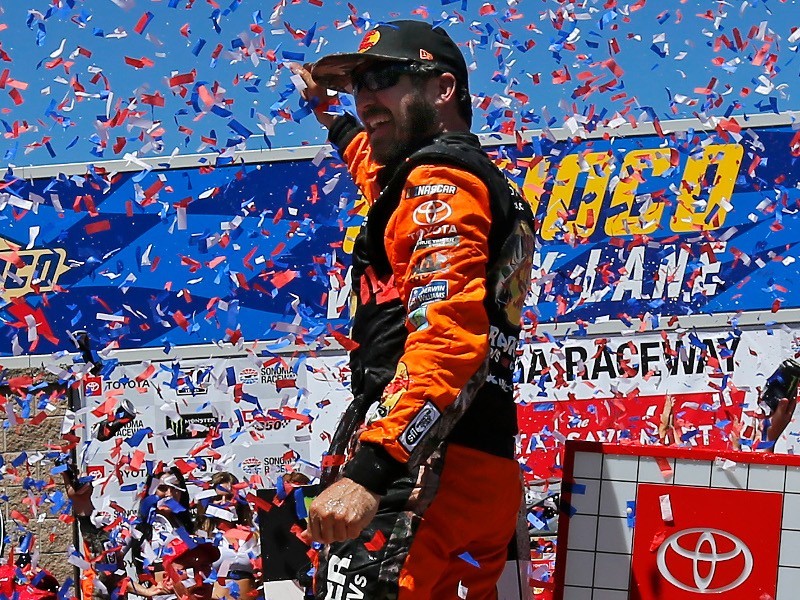 If your name isn’t Truex, Busch or Harvick, you haven’t won a NASCAR Cup Series event at Sonoma Raceway in the past decade.

NASCAR’s premier division returns to the 2.52-mile road course north of San Francisco for the first time since 2019, given that the scheduled 2020 race there was squelched by the coronavirus pandemic.

The leading active winner at Sonoma with three victories, Martin Truex, Jr. has triumphed in the last two events there and will look for a third straight in Sunday’s Toyota/SaveMart 350.

“We’ve been going there a long time, obviously, and been able to figure out some tricks and some things that work for me and really just dial the car in to the way I like to approach the track and the things I look for in a car,” said Truex, who is coming off a disappointing 29th-place finish in last Sunday’s Coca-Cola 600 at Charlotte.

“We’ve been lucky to have great teams and great race cars out there at Sonoma. For whatever reason, it’s just been a really good place for us. We need to get some momentum back, and this would be a good place to do it this weekend.”

Kyle Busch has two wins at the Sonoma road course, and Kurt Busch and Kevin Harvick have accounted for one each. Among active Cup drivers, Truex, the Busch brothers and Harvick are the only former winners at the track in the field for Sunday’s race.

But Truex is the only current Cup driver who has won a race on the 2.52-mile configuration of the course, with the addition of turns 5 and 6 replacing the short straight between turns 4 and 7 in 2019. Turns 5 and 6 collectively make up the “Carousel,” a sweeping 200-degree radius corner that will have most drivers on edge as they navigate the difficult stretch of track.

“One of the toughest turns now is that Carousel,” says Californian Cole Custer, who has never raced a Cup car at Sonoma but who finished fourth in a 2019 K&N Pro Series West race on the new configuration. “I think it’s just a really awkward corner, and it doesn’t feel like a corner a race car should be going through.

“It’s really tight, really downhill, off-camber. It’s just a really tough corner, and it’s something that you never go through there and feel like you did it right. It never feels natural, so it’s one of those things you just kind of have to hit your marks and make sure you don’t overdo it through there.”

Chase Elliott comes to Sonoma as the undisputed master of NASCAR Cup Series road course races over the past three seasons. The reigning series champion got his first Cup victory at Watkins Glen in 2018. Six of his 12 wins have come on road courses, most recently in the inaugural Cup race at Circuit of the Americas in Austin, Texas.

Sonoma, however, is a riddle Elliott has yet to solve. In four starts at the technical track, Elliott has a best finish of ninth twice, in 2018 and 2019.

“Sonoma is a place that I haven’t done a very good job in the past,” Elliott says. “It’s been a pretty big challenge for me. It’s been a couple of years since we’ve been there, so it’s been a while.

“When we were there in 2019, I felt like we were doing a great job and in a good position before we had our mechanical issue, so I’m looking forward to getting back and having another shot at it.”

A.J. Allmendinger and Austin Cindric are a pair of bookends at the Mid-Ohio Sports Car Course.

Driving the No. 22 Ford for Team Penske, Allmendinger won the inaugural NASCAR Xfinity Series race there in 2013. Cindric, the reigning series champion, is the most recent winner there, also in a No. 22 Team Penske Ford.

Cindric’s victory came in 2019, before adjustments to the Xfinity Series schedule necessitated by the coronavirus pandemic removed Mid-Ohio from the 2020 slate of events.

Cindric and Allmendinger — the latter now driving the No. 16 Chevrolet for Kaulig Racing — are both expected to contend for the victory in Saturday’s B&L Transport 170 at the 2.258-mile road course.

Because of the difficulty in passing on the tight, technical course, Allmendinger favors an aggressive approach.

“You’ve got to make your own passing zones,” Allmendinger says. “It’s for sure a challenge to pass at this race track. With an Xfinity car, with the way the tires go away, from start to finish you get a big difference in lap times from the start of a run to the end of a run, so it gets a little easier to pass.

“If you get through turn 1, you can get a good run up toward turn 2, and you can make a passing zone out of that. At the end of the back straightaway, there’s a good passing zone there as well. In the infield, you’re kind of single file, (but) with our cars, you have the luxury of being able to use the bumpers a little bit and being able to force somebody into a mistake, if that’s what you have to do.”

Justin Allgaier of JR Motorsports is the only other former Mid-Ohio winner in the field for Saturday’s race, having taken the checkered flag in the 75-lap event in 2018. Another potential contender is road course ace Miguel Paludo, who will drive the No. 8 JRM Chevrolet on Saturday.

“I’ve always really enjoyed racing at Mid-Ohio,” Allgaier says. “It’s a challenging-but-fun road course. We had a strong run just a couple weeks ago on the road course at COTA (a third-place finish), and I feel extremely confident that we will have that same kind of speed with our Brandt Professional Agriculture Chevrolet on Saturday.

“It’s a big weekend for (sponsor) Brandt with Miguel back in the No. 8, so hopefully we can both have a strong day and battle it out for the win in the end.”