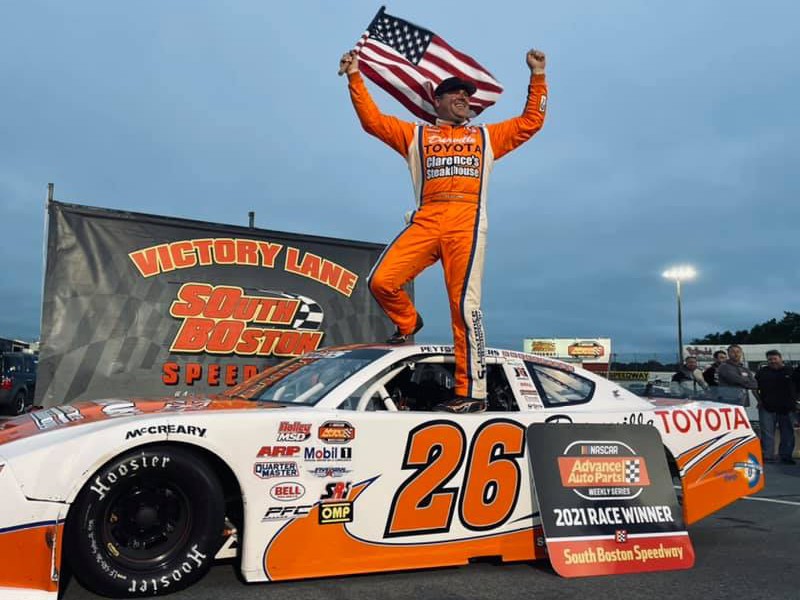 Sellers, of Ringgold, Virginia, sped past pole winner Stuart Crews to take the lead on the 14th lap, with Thomas Scott following him to the front. From there, the race became a battle between Sellers and Scott, with Scott hounding Sellers for the lead for most of the remaining 86 laps.

Scott made several runs at Sellers for the lead, but Sellers fended off Scott’s challenge each time. Sellers gradually inched away from Scott over the last 15 laps, crossing the finish line 1.518 seconds ahead of Scott to take the win.

“It’s good to put this Clarence’s Steak House car in Victory Lane,” Sellers remarked. “We didn’t have the best car here tonight. Thomas Scott did. I just kept it (the car) on the bottom. I really didn’t have to make the car wide. I was just able to slide up, and I had good grip off the top side and the bottom. I was just able to beat him on drive-off (off of the corners).”

Scott had multiple opportunities to take the lead but was unwilling to move Sellers out of the way.

“If it had been anybody else, I probably would have used him up a little more,” Scott said.

“They’ve been working hard and he’s running for a national championship. If I wrecked my boss, it would have put me in a weird spot.”

Scott said he felt good knowing he had the best car.

“It feels good to have the best car,” Scott remarked. “I ran my right rear tire pretty hard trying to pass him a few times. He was holding strong on the top. When it came time to go the last 15 laps, I just didn’t have any right rear (tire) left to get off of the corner and he was able to get away from me a little bit.”

It has been two full seasons since J.D. Eversole has won a NASCAR Limited Sportsman Division race at South Boston Speedway. The long drought came to an end Saturday night in the first 25-lap race of what had been scheduled as twin 25-lap races.

Eversole took the lead on the opening lap of the race and fended off a challenge from Drew Dawson in a two-lap dash to the finish that followed the last of the race’s three caution flags to secure his first win of the season.

Dawson finished second .569-second behind Eversole with Eric Winslow in third, Daniel Crews in fourth, and Andrew Amos in fifth.

Johnny Layne had to wait through a lengthy rain delay but the wait was worth it as he captured his first win of the season in Saturday night’s 30-lap Budweiser Pure Stock Division race.

Layne led twice in the race, leading all but seven laps enroute to a 1.242-second win over runner-up Justin Dawson. Scott Phillips finished third in his best outing of the season. Bruce Mayo came home in fourth, with Randy Hupp in fifth.

Layne’s victory ended a six-race win streak that had been compiled by division points leader Nathan Crews. Crews was leading the race when the engine in his car expired, forcing him to the sidelines.