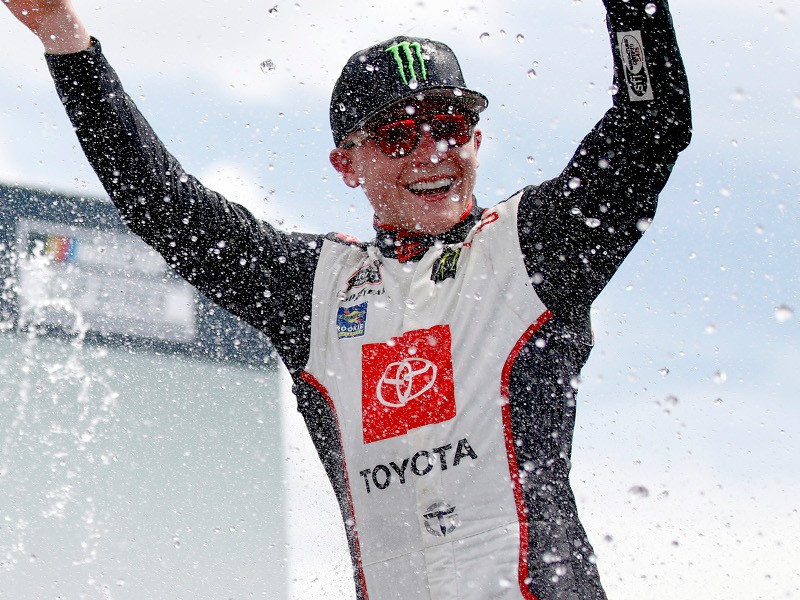 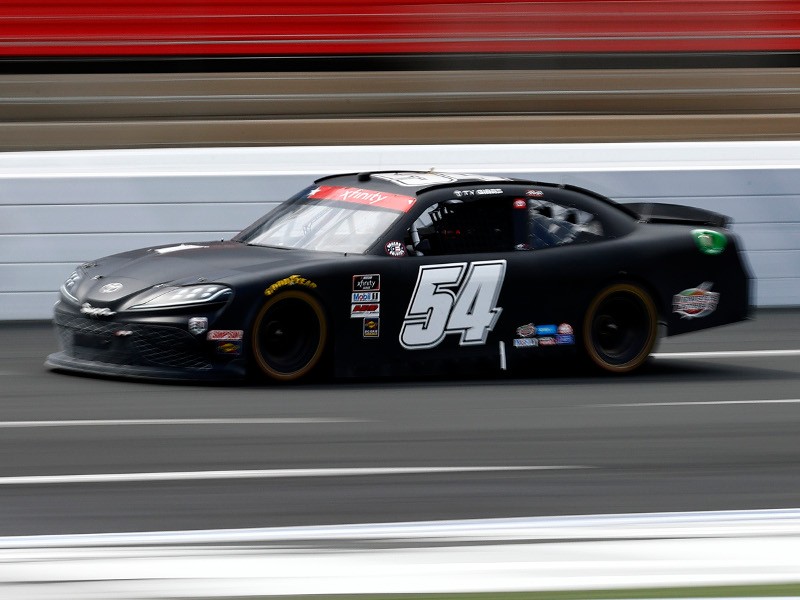 At the end of the second segment of Saturday’s NASCAR Xfinity Series race at Charlotte Motor Speedway, Ty Gibbs found himself spinning through the Astroturf on the infield of the track’s frontstretch.

After the checkered flag flew, he found himself driving into victory lane with his second career series win.

“I was definitely frustrated with myself,” said Gibbs. “I completely wrecked myself, but didn’t really make myself look good today and made some mistakes. Definitely still learning how the air works and I’ll take full responsibility for all the mistakes I made. Overall, we ended up in victory lane. Can’t thank my guys enough and Monster Energy and my family.”

After his spin on lap 90, Gibbs fought his way back through the field and with 24 laps to go, closed quickly on leader Chase Briscoe.

With 19 laps to go, Gibbs took the lead. Briscoe countered half a lap later, looking for the lead on the outside. But Briscoe’s Ford broke loose, spinning to the inside of the backstretch.

From there, Gibbs’ No. 54 Joe Gibbs Racing Toyota was never off the point, as the 18-year-old – who is only competing in a part time capacity this season – drove to his second career win in just his sixth career start. He won earlier this year on the Daytona International Speedway infield road course in his first NXS start.

Briscoe came back to finish in sixth after leading 60 laps before the spin while fighting for the lead.

“That last run we just weren’t as good,” said Briscoe. “We were really good the two previous runs and we tightened up and the track tightened up as well and I was just struggling to even maintain my lead. I knew about lap 10 of that run I was gonna be in trouble just because I was already building tight. Ty was gonna get me, I think, either way. It’s unfortunate. I don’t know if he got into me or not, I haven’t seen it yet, but unfortunate that we ended up running sixth instead of second. I’m thankful for the opportunity as always. It’s always fun to come back in the Xfinity Series. It was cool to have Production Alliance Group back on the car and Tex-a-Con and all the people that allowed me to do this race. I wish we obviously could have got in victory lane.

“It’s frustrating to lead that many laps and come away sixth, but that’s part of it. He’s going for a win. I’m going for a win and there’s gonna be contact in close racing. I can’t complain either way.”

“We really picked residency in P4 for much of the day, so, honestly, all in all P2 is not bad,” said Cindric. “You obviously want to win the race and we put ourselves in position to have a shot and some days that’s all you can ask for. I’m happy to get the CarQuest Ford Mustang up with a chance. We were carrying 30 names of fallen heroes from the CarQuest family on the back of our car, so happy to represent them well today and move on to next week. One for the notebook.”

The race ran mostly clean for the first 150 laps, there were two major crashes in the final 50 laps that left several cars damaged.

The first occurred on a lap 151 restart. Tucker, Georgia’s Ryan Sieg was in the lead, having taken only fuel on pit road to gain track position.

While racing with Briscoe in turns 1 and 2, Sieg’s Ford broke loose, and slid through turn 2. The car caught traction off the turn, sending it back up the track and into traffic, where he gathered up both Josh Berry and Brett Moffitt. Both Sieg and Berry were eliminated from the race.

On the lap 187 restart, contact between Joe Gibbs Racing teammates Daniel Hemric and Brandon Jones triggered a multi-car crash in turn one, as Noah Gragson and Justin Haley were gathered up, along with Michael Annett, Tommy Jo Martins and Riley Herbst. That led to a brief red flag condition to allow for track cleanup.

Hemric, who won the first two segments of the race and led a race high 105 laps before a penalty on pit road on lap 121 set him back in the field, finished the day in the garage, credited with a 28th place finish.