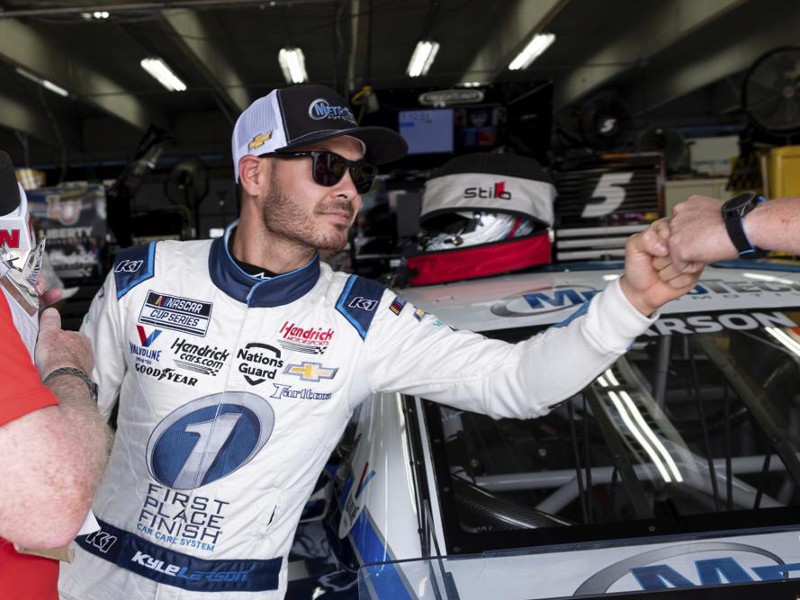 CONCORD, N.C. (AP) — Those who’ve been around Hendrick Motorsports over the past few years know all about the record.

It’s impossible not to.

Car owner Rick Hendrick has made no secret to his employees about how badly he wants to surpass Petty Enterprises for the most Cup Series wins in NASCAR history. That long-term goal can become a reality Sunday when Hendrick goes for win No. 269 in the Coca-Cola 600 at Charlotte Motor Speedway.

“We’ve had 268 circled for so long, I don’t even know what 269 is going to be like yet,” said Chad Knaus, vice president of competition at Hendrick Motorsports. “We’re really excited to be right there, close to being able to get that. The 600 would be an awesome time for us to get it right here in Hendrick Motorsports’ backyard.”

Hendrick's quest for history got off to a roaring start on Saturday when Kyle Larson captured the pole, while teammates Chase Elliott and William Byron qualified third and fourth, respectively. Hendrick’s other driver, Alex Bowman, will start seventh.

All four Hendrick drivers already have won this year, including Elliott’s rain-shortened victory last week at the Circuit of the Americas.

“It’s an important thing to Mr. Hendrick and he’s made that very apparent over the last couple of years,” Elliott said. “When your leader cares about something that much, we all care about it equally as much and we want to achieve that for him."

Hendrick said last week: “The respect and admiration I have for Richard and Kyle (Petty), that whole family, it’s a big deal for me to be just mentioned with him.”

Knaus said he can’t wait to celebrate with his boss — whenever that next win comes.

“I’m a huge Rick Hendrick fan,” Knaus said. “He has been a metric to me since I was 21 years old and has really helped me along with my career. I’m just happy to be a part of it. I can’t wait to give him a big hug after we get it and we can go and hopefully get more.”

To reach the winner’s circle, Hendrick will have to beat Martin Truex, Jr., who has won the Coca-Cola 600 three times.

“This place here, we’ve found some things that work for us and we’ve been able to ride that horse for five, six years now,” Truex said. “It’s getting more challenging, the track is getting rougher and the teams are all getting closer together setup-wise and what everybody knows about these cars these days. Things have really come together in a smaller box. It’s going to be tough.”

With 11 different winners in 14 races this season, there are just five available spots for NASCAR Cup Series playoffs. Four of those will come via points or a win, with one spot reserved for the points leader, currently Denny Hamlin. Hamlin and Kevin Harvick are winless this season but would be the first two drivers in on points right now.

Harvick has had plenty of success at Charlotte Motor Speedway, with three wins, nine top-five finishes and 19 top 10s in 38 career starts. He finished fifth in the Coca-Cola 600 last season.

Elliott’s cousin Trey Poole will serve as his spotter on Sunday.

Elliott’s regular spotter, Edward James D’Hondt, was suspended earlier this week by NASCAR and Hendrick Motorsports after he was arrested in Catawba County and charged with battery of unborn child and assaulting a women.

“He’s been around our team for a long time,” Elliott said of Poole. “... He’s been watching this stuff forever, so he knows how it works. He knows what’s important and what’s not.”

The Coca-Cola 600 is the longest race of the year, which requires some extra preparation, according to Byron.

“That eating and hydrating is a little bit different because throughout the race you need more fluids, and you also need to eat at some point during the race, whether it’s like energy chews or stuff like that,” said Byron, who grew up in Charlotte.

All of the cars in the field Sunday will feature the name of a fallen soldier on the windshield as part of the “600 Miles of Remembrance.” It’s a tradition that began in 2015 and has been featured in every Coca-Cola 600 since as part of the Memorial Day celebration.

“To get to understand the story a little bit more through the weekend with the family is really special from our standpoint,” Hamlin said. “Really great with everything NASCAR Salutes has done to pay tribute on the windshields and hopefully we can take ours to victory lane.”

Larson stands as the favorite to win in Charlotte at 4-1. Elliott is listed at 11-2 while Truex is 6-1 and Kyle Busch 7-1. ... Brad Keselowski is the race’s defending champion and is looking to become the seventh driver to go back-to-back at Charlotte. ... The Coca-Cola 600 is the only Cup Series race of the season that is broken into four stages of 100 laps each. ... Carolina Panthers 2019 All-Pro running back Christian McCaffrey will serve as the honorary pace car driver. ... Ticket restrictions have been lifted for the race and COVID-19 vaccinations are not required.