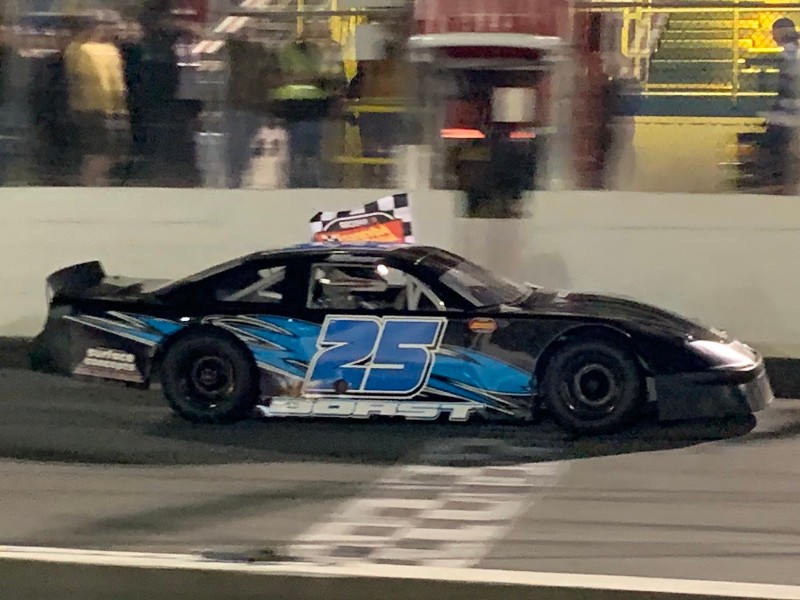 Another teenager, Landon Pembelton, finished second, 1.504 seconds behind Borst, to give the two rookies a sweep of the top two positions in the race. This was Pembelton’s second runner-up finish at South Boston Speedway this season.

“Even though Pembelton’s a rookie, he is still one of the best out here.”

Borst qualified seventh but quickly moved up to third place. Things unfolded from there.

“I just knew to take my time and just make my way forward,” noted Borst.

“Thomas and Trey got together, and it was one of those deals where you don’t really know where to go. I just tried to get stopped as quickly as I could. I just luckily got through it.”

Pembelton started eighth in the race, and like Borst, steadily threaded his way through the field. He moved into second place with about 25 laps to go but was unable to mount a serious threat to Borst at the end.

“We just came up a little short,” Pembelton remarked. “I think if I had had 10 or 15 more laps I might could have gotten to his back bumper and maybe done something with him.”

The victories were the second wins of the season for both Moss and Dawson.

The race featured four lead changes among four drivers with Dawson leading twice for a total of 10 laps.

Nathan Crews ran his early-season win streak to four in a row Saturday night with a victory in the 30-lap Budweiser Pure Stock Division race.

Results of the race are unofficial pending a post-race technical inspection.

Crews started at the rear of the field, took the lead from Johnny Layne on the 12th lap and led the rest of the way, edging Layne by .773-second for the win.

Josh Dawson scored his third win of the season with a victory in the Budweiser Hornets Division race.