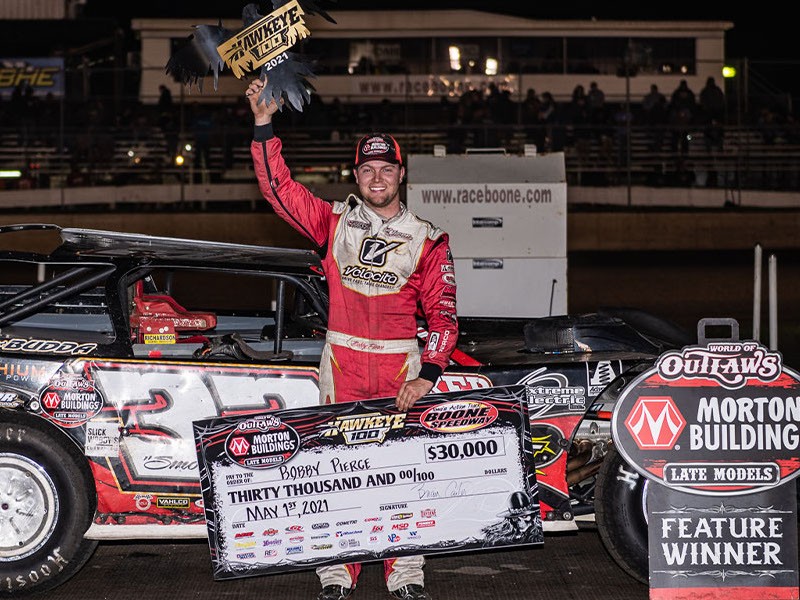 When the World of Outlaws Morton Buildings Late Models run long distance events, you can count on Bobby Pierce to be knocking on the door to Victory Lane.

It’s his second win of the season, and second World of Outlaws win of his career. Both of his wins in 2021 were in races lasting more than 50 Laps. The other came at Farmer City Raceway in the 75-Lap Illini 100 finale.

While the Oakwood, Illinois driver started fifth in the Series first-ever three wide start, he caught everyone’s attention after a lap 21 caution. Pierce charged through the field off the restart, moving from fourth to first in eight laps to take the lead for good.

Before that restart, he knew he had to make his move based off what the track was doing.

“I felt just a bit of rubber off (turn 2), and I knew right then I had to go for it because sooner or later it was going to latch down,” Pierce said. “I don’t know what it was, but all of a sudden the car just lit up.”

Even though Pierce seized the opportunity, he knew there was a long way to go. It didn’t bother the Prairie State driver who’s had success in long distance events.

Another driver who used restarts to his advantage was second place finisher Shannon Babb. The Moweaqua, IL driver nosed out ahead during a four-wide battle and gained the position he’d never relinquish.

Babb had the challenge of trying to rush toward the front, while making sure he still had something at the end.

Finishing off an all-Illinois podium was three-time and defending champion Brandon Sheppard. It’s his fifth top-five finish of the season, and Series leading 10th top-10.

Up next, the World of Outlaws Morton Buildings Late Model Series visits Mississippi Thunder Speedway in Fountain City, Wisconsin on May 7-8 for the Dairyland Showdown.