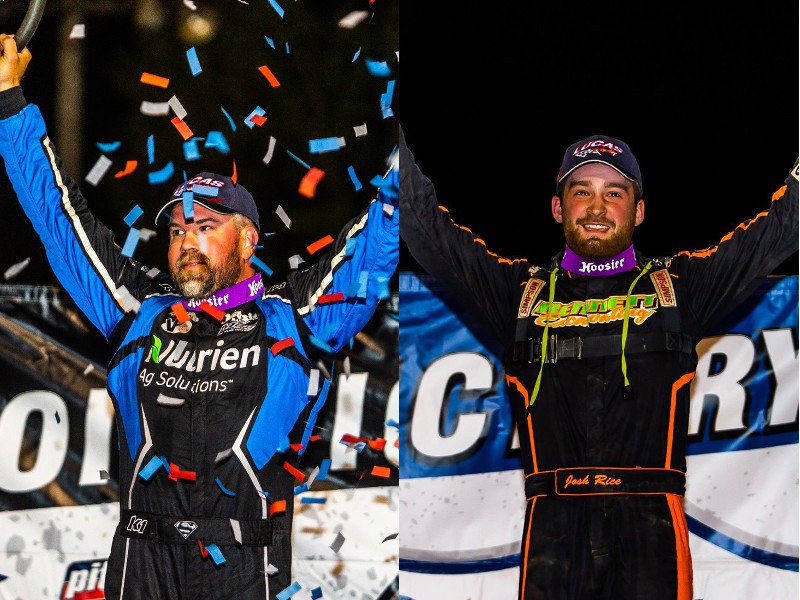 Jonathan Davenport and Josh Rice both picked up Lucas Oil Late Model Dirt Series victories in the Bluegrass State over the weekend.

McCreadie started on the pole and set a steady pace early with Marlar and Davenport trying to stay close to him. Marlar briefly led a lap just past the halfway mark, but McCreadie was able to retake the lead as lap 28 was scored. A caution with 32 laps scored bunched up the field one more time and set-up a shootout to the finish.

Marlar held the second spot behind McCreadie as Davenport wrestled the spot away from Marlar with nine laps to go. Davenport set sail catching McCreadie in traffic with a just a few laps remaining that set-up the run to the checkered flag.

“Timmy (McCreadie) got hung up behind those lapped cars and was just a sitting duck there,” said Davenport. “I did not have any choice except to try something different. I thought earlier in the race I could snooker them on the bottom. We got really good down there and then Timmy moved to the bottom. The cautions have been killing me here lately. Me and (Mike) Marlar went back-and-forth for second and third. I knew our car was pretty good and Timmy’s was too. The first time I came here I embarrassed myself, but ever since we have had a good set-up for this place.”

On Saturday night, Josh Rice scored the biggest win of his racing career in the 35th Annual Ralph Latham Memorial at Florence Speedway, earning $15,000 for the victory.

On lap 57, Rice took the lead from Hudson O’Neal and pulled away for the win in front of his home track crowd. Rice’s margin of victory was 1.212 seconds ahead of O’Neal at the finish line. The 22-year-old Kentucky racer scored his first career series win.

A caution with 32 laps complete set-up a battle between O’Neal and Rice. Time-after-time Rice threw a slide job in turns one and two to briefly take the lead, but each time O’Neal crossed over to maintain the point.

Rice was overcome with emotion in Lucas Oil Victory Lane as he became the 11th different winner on the series tour in 2021.

“I can’t believe it,” said Rice. “I thought I was never going to get by him (O’Neal). I didn’t know if I was clearing him or not. I wanted this one so bad. I have been asked what is my most wanted win and it is this race. Dave Latham and his family have been so good to me. You race fans are awesome. I almost lost my voice screaming in the car getting over here to victory lane.”