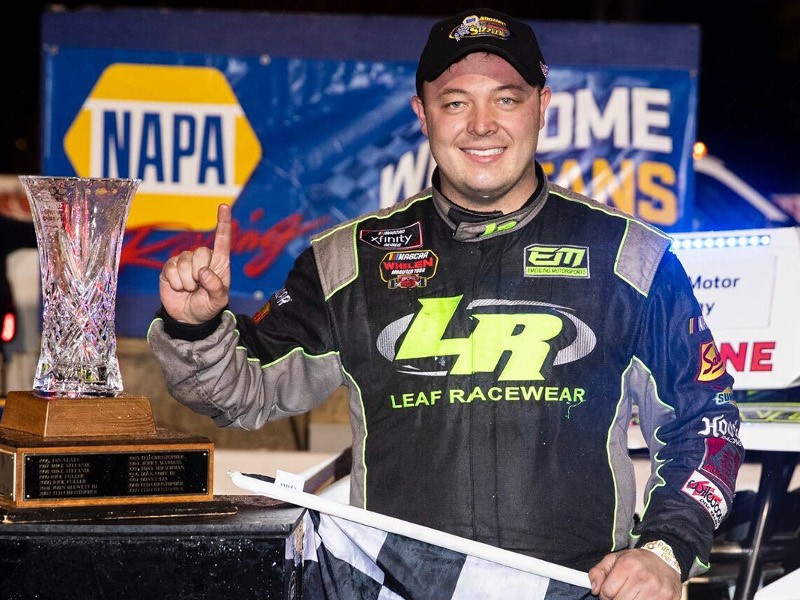 STAFFORD, Conn. — Patrick Emerling dodged the wreck. And then waited on the rain.

To get the win, Emerling had to pilot the No. 07 Captain Pip Marina Chevrolet through a cluster of spinning cars after Ryan Preece and Ron Silk got together in turn 2 battling for the win. The wreck also collected Anthony Nocella and Justin Bonsignore. Emerling, who was running fifth, went high and then dove between the pinwheeling Nocella and Bonsignore to get clear.

The red came out during the ensuing caution for developing rain showers, and the weather eventually forced NASCAR officials to call the event.

Eric Goodale, who won the season opener at Virginia’s Martinsville Speedway, also picked his way through the cars to finish second.

Tommy Catalano finished third, while Timmy Solomito overcame an earlier spin of his own to finish fourth. Craig Lutz rounded out the top five.

It is Emerling’s second career NASCAR Whelen Modified Tour win in 112 starts over 11 seasons. He won at Bristol Motor Speedway in 2017 after leading 148 of 150 laps. On Friday, the only laps he led where the final seven under yellow.

His best finish at Stafford was fourth in 2018. Driving for his family-owned team, Emerling also matched crew chief Jan Leaty, who won the 1996 Spring Sizzler as a driver.

Goodale leads Emerling by six points and Catalano 11 after two races. McLaughlin is fourth, while defending tour champion Justin Bonsignore is tied with his cousin Kyle for fifth.

Matt Swanson earned his first Mayhew Tools Dominator Pole Award earlier in the evening and led a race-high 84 laps, but a wreck ended his night after 111 laps and he finished 20th.

The NASCAR Whelen Modified Tour returns to action on Saturday, May 15, with the first of three trips to Riverhead Raceway on Long Island.