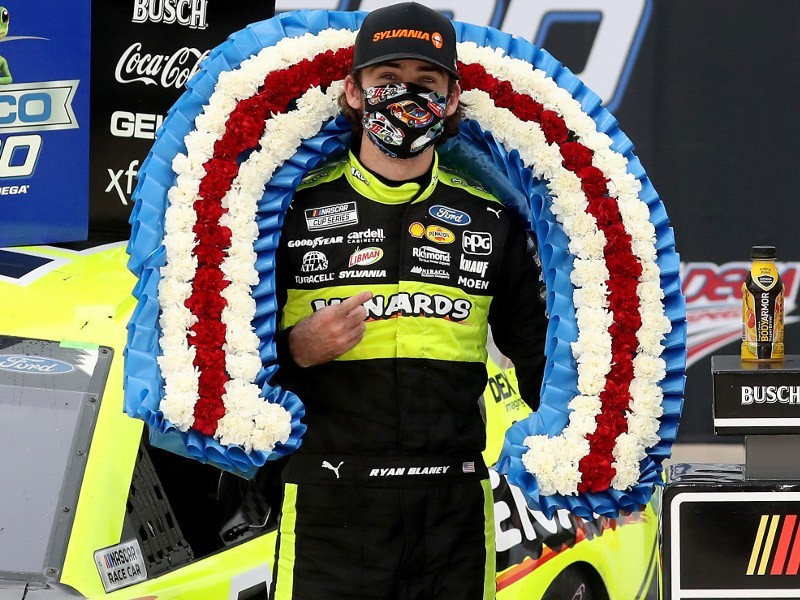 Conventional wisdom says anyone can win at Talladega Superspeedway.

For Brickhouse, Brooks, Pond, Bouchard, Hillin and Parsons winning at Talladega marked the only trip to Victory Lane in a Cup race — ever.

In recent times, however, the coterie of winners at Talladega has narrowed, and purely from a statistical standpoint, it pays to be driving a Ford.

Nine former Talladega victors are entered in Sunday’s GEICO 500. Foremost among them is Brad Keselowski with five wins, though the driver of the No. 2 Team Penske Ford hasn’t taken a checkered flag at the superspeedway since the Playoff race of 2017.

Keselowski’s teammates have taken up the slack. Joey Logano won the spring race of 2018, and Ryan Blaney won the fall race of 2019 and first race of 2020 before Joe Gibbs Racing driver Denny Hamlin broke the string last fall.

Team Penske drivers have won seven of the last 11 races at Talladega, and with Stenhouse winning in 2017 and Aric Almirola picking up his first Talladega triumph in 2018, Ford drivers have won nine races in that 11-event stretch.

In last Sunday’s Cup race at Richmond, Almirola finished sixth — his first top-10 run of the season — and views Talladega as a chance to join the winners’ list this season.

“I’ve won at Talladega in the Cup Series, the Xfinity Series and always seem to find myself up front with a shot to win most races there, so I really view Talladega as a place that is a potential possibility to go and get a win.”

It would be unwise to discount Hamlin’s chances, though. The driver of the No. 11 Toyota won from the pole last October, only the third time in the 21st century the top starting spot has produced a victory. With the starting field set according to Metric Qualifying, Hamlin is on the pole for Sunday’s race.

Currently leading the series by a whopping 81 points over teammate Martin Truex, Jr., though looking for his first victory this year, Hamlin has finished in the top-five in eight of the nine Cup races this season for an average finish of 4.2. He was runner-up to Alex Bowman in last Sunday’s race at Richmond.

Harrison Burton, son of 21-time Cup winner Jeff Burton, will make his debut in NASCAR’s top series at Talladega. The 20-year-old Burton is the first driver born in the 2000s to compete in a Cup race.

“I’m excited to be here, but I’m a competitive guy, so just being there isn’t enough,” says Burton, who will start 39th in the No. 96 Toyota. “I’m really looking forward to working hard and trying to get a really good run out of it.”

No current NASCAR Xfinity Series driver has attained mastery over superspeedways to the extent achieved by Kaulig Racing’s Justin Haley, who will try for his third straight Talladega win in Saturday’s Ag-Pro 300.

Haley, who will start fifth, swept both Talladega races last year. His only other Xfinity Series win came at Daytona International Speedway, where the driver of the No. 11 Chevrolet also scored an unlikely NASCAR Cup Series win in the rain-shortened 2019 summer race.

Haley should have plenty of help at Talladega from teammates A.J. Allmendinger and Jeb Burton. As a unit, the Kaulig Racing cars have been the dominant force in Xfinity Series superspeedway racing over the past two years.

“I’m hoping to have the speed at Talladega that we’ve had in the past,” Haley says. “It’s always been one of my favorites, and I’m excited to get back on track with my teammates and working together again to get (team owner) Matt Kaulig more trophies.”

Chevrolets, which have massive strength in numbers (29 of the 40 cars in the field), boast a four-race winning streak at Talladega.

Though Austin Cindric is starting on the pole under Metric Qualifying, that’s not necessarily an advantage. In 30 Xfinity Series races at the 2.66-mile track, the No. 1 spot on the grid has produced only three winners: Joe Nemechek in 1998, Tony Stewart in 2008 and Haley in last year’s first race at the superspeedway.

And unlike Haley, Cindric has no teammates — a distinct liability in the draft.