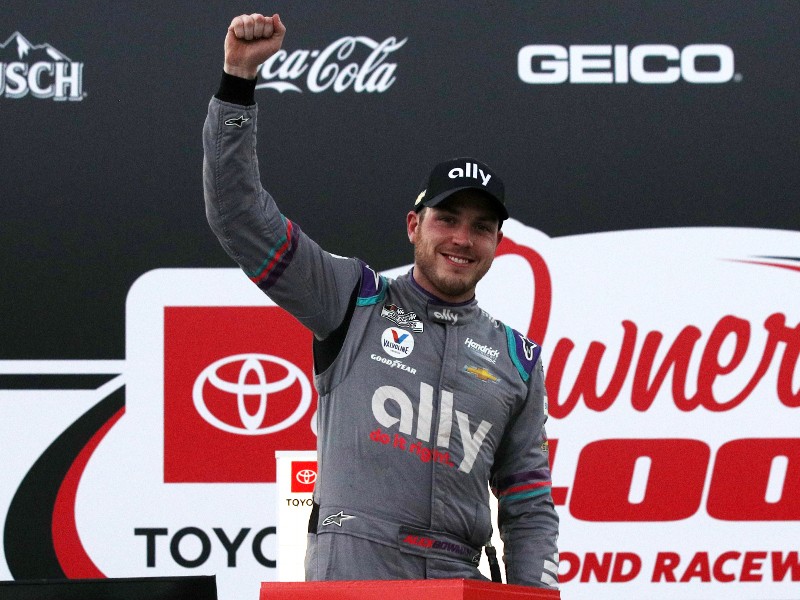 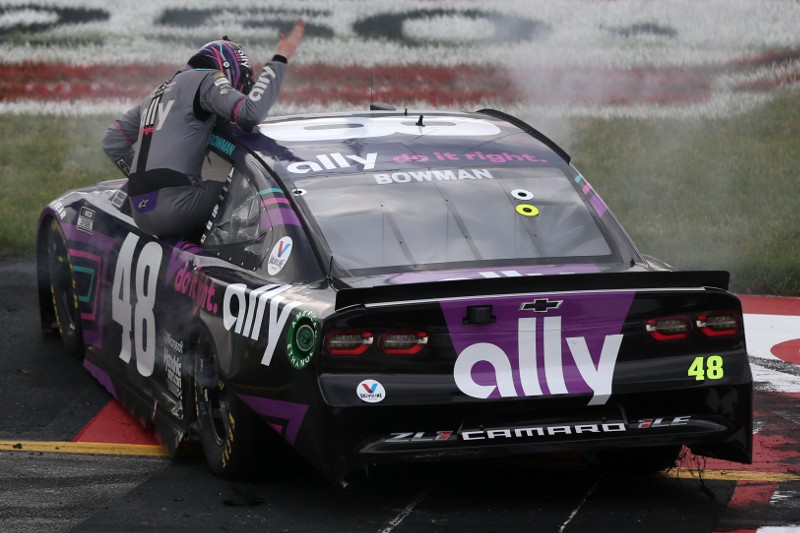 Alex Bowman made the most of the final restart in Sunday’s NASCAR Cup Series race at Richmond Raceway.

After restarting in third with 12 laps to go, Bowman powered around second place Joey Logano. He then wrestled the lead away from Denny Hamlin with 10 laps remaining, and drove away to the victory in the Toyota Owners 400.

“We just had a great race car, it’s as simple as that,” said Bowman. “Greg Ives (Crew Chief) and all the guys, they have to deal with me at short tracks and I drive these places really wrong. We kind of instead of trying to make me figure it out, we went to work on getting the race car where I needed it to be. Greg has done such an amazing job at making that happen.”

It marks the third career series win for Bowman, and his first behind the wheel of the Hendrick Motorsports No. 48 Chevrolet. It’s also the first Richmond victory for HMS since 2008 and the first win for the No. 48 since 2017.

Bowman also had to overcome a penalty on lap 240 for a tire violation on pit road to become the eight different series winner in nine races on the season.

“To be honest with you, we were terrible on short runs,” Bowman said. “We restarted third and I’m like man, if we get out of here with a solid top-five, we’ll be good. We’ve overcome a lot today. I don’t know if Greg pumped the pressures way up or what he did, but that’s more grip than I’ve ever had in a race car at Richmond and it worked out really well. Getting to race a guy like Denny (Hamlin) at a place that this is really cool. I feel like we raced each other really clean, so I’m appreciative of that. It means a lot.”

Hamlin had dominated the event, winning the first two segments of the race and leading 207 of 400 laps, the most on the day. Over the closing laps, he tried to close on Bowman as the leaders negotiated lap traffic. In the end, Hamlin had to settle for second place.

“We just didn’t take off quite as good there at the end,” Hamlin said. “I tried to warm it up and do everything that I could – just the 48 (Bowman) had a little more on those last few laps and I couldn’t hold the bottom. Once he got the position, we were just shut down there. Great job by this FedEx Ground team. First and foremost, we want to think of all of the families in Indy right now. Awful tragedy to happen there. Our thoughts and prayers are with these names. We will get them. We will keep digging. We are dominating – just have to finish it.”

Joey Logano had the lead with 65 laps to go, and seemed to have his second win of the season in hand until a caution flew with 18 laps to go when Kevin Harvick crashed in turn one.

Hamlin beat the field off of pit road, with Logano second and Bowman third, setting up the final restart of the day.

Logano finished in third when the checkered flag flew.

“Congratulations to them. They beat us,” said Logano. “I think probably their adjustments they made on that final pit stop definitely made his car fire off really well. He started to pay the penalty the last couple laps, but he was so far out that it didn’t matter. It’s frustrating because we were so close with the Shell/Pennzoil Mustang and wanted to get our Ford in victory lane here and led some laps. We made the pass on Denny and then we had a heck of a battle going back and forth. He was tight when I passed him and then I was tight and he caught back up to me, so the track was changing there and we were both trying to keep up with it. Dang it. I hate being that close.”

Christopher Bell came home in fourth place, while his teammate, Martin Truex, Jr., had to rebound from a setback with about 100 laps to go.

Truex, Jr. was in the fight all day, leading five times for 107 laps. But a pit road speeding penalty during green flag pit stops on lap 294 put him back in the pack. He was able to race his way back up to fifth place by the end.

“Driver screwed up our chances there for sure,” said Truex. “Auto Owner’s Toyota Camry was really fast. Just like last week, we got off in the middle of the race and then stage three we got it dialed in and I got caught speeding on pit road. We had to drive all the way back through the field and under green, that was tough. We got all the way back to fifth. Heck of an effort by the guys and wish I hadn’t made that mistake so I could have seen what I could have done with them.”