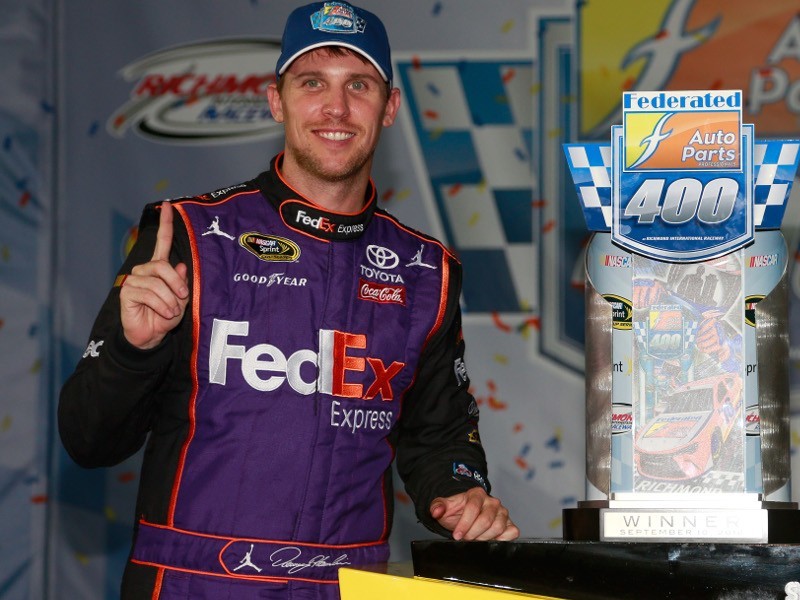 As the NASCAR Cup Series stays in the state for Sunday’s Toyota Owners 400 at Richmond Raceway, a certain Virginian couldn’t be more motivated to hoist his first trophy of the year.

Denny Hamlin, who was raised in Chesterfield, Virginia – about a half hour drive from the Richmond track – has already turned in a competitive season for the ages. And we’re only eight races into the NASCAR calendar.

He’s scored a series-high seven top-five finishes – more than he earned in three previous full seasons and twice that of all drivers but Kyle Larson (four top fives). A top five this week would tie Hamlin’s career-best streak of six consecutive. His No. 11 Joe Gibbs Racing Toyota has led a series-best 487 laps and Hamlin holds a commanding 76-point lead on his Joe Gibbs Racing teammate Martin Truex, Jr. in the points standings.

The only thing left to do for the perennial championship contender is score that first victory of the year.

Hamlin is especially good at the 0.75-mile Richmond track with three trophies there as proof. His driver rating is third best – behind his JGR teammate, six-time winner Kyle Busch and three-time winner Kevin Harvick.

All three of these Richmond masters and annual title favorites, however, are looking for their first victory of 2021.

Busch, driver of the No. 18 Joe Gibbs Racing Toyota, among active drivers has a series-best six Richmond victories and a series-high seven more runner-up finishes – meaning he won or finished second in nearly half (13 of 30) of his NASCAR Cup Series starts at the track. Furthermore, his 16 short track victories is easily tops in the series among drivers entered this weekend. Hamlin and Busch’s older brother Kurt are next with 10 short track wins.

The two-time series champion Kyle Busch arrives in Richmond, however, 11th in points with only a pair of top-five and four top-10 finishes on the season with no shortage of motivation.

Harvick, driver of the No. 4 Stewart-Haas Racing Ford, similarly, shows up at Richmond more than ready to right his team’s ship as well. He’s a three-time winner at the track and his 26 top-10 finishes in 39 starts is best among active drivers. He ranks first or second in five of the six pre-race Loop Data statistical categories. His 7.210 average running position, 93 percent of laps run in the top-15 and 972 quality passes leads the field.

Interestingly, seven of the 10 active drivers with previous short track victories are still looking for a win this season. And last year’s Richmond Playoff winner Brad Keselowski is among that group. Reigning NASCAR Cup Series champion Chase Elliott is as well.

With so many of the sport’s best more than ready to get that first trophy of the year and a sure-bet Playoff berth, there’s good reason to expect a chippy afternoon at Richmond. And these drivers say they are prepared for that.

For all but a small handful of NASCAR Camping World Truck Series regulars, competition at this week’s Richmond Raceway is a new skill set. Among the regular season championship contenders, only Matt Crafton and Johnny Sauter have multiple previous starts at the 0.75-mile track, which is hosting the ToyotaCare 250 on Saturday afternoon.

There was robust competition at Richmond in the Camping World Truck Series for a decade (1995-2005) and the series returned to race there again, last year with Grant Enfinger earning a 1-second victory over the three-time series champ Matt Crafton.

Enfinger will be in a Toyota Tundra this week and the make is working on a perfect season with victories in all five races to date – the second time in three years that has happened to start the season.

It’s been two full weeks since the Trucks last raced – at Bristol – and it’s fair to say drivers are highly anticipating this week’s short track battle.

Beyond Nemechek’s slim six-point advantage over Rhodes, reigning series champion Sheldon Creed is only 21 points back. Crafton is fourth in the standings, 40 points back, followed by Stewart Friesen (-53) and perennial favorite Austin Hill (-55) who has climbed back into contention after a rough season start.

The series all-time winning driver Kyle Busch will be making his third start of the season at Richmond and like most of the field – racing for his first career series win there. Busch, owner-driver of the No. 51 Kyle Busch Motorsports Toyota, has two previous Richmond truck starts, finishing 22nd in 2001 and crashing out (30th place) in 2005.

The odds certainly favor a robust course correction, however. He has a record six NASCAR Xfinity Series wins there – three times from pole position. He has another six NASCAR Cup Series victories at Richmond coupled with seven runner-up finishes – 13 of his 30 starts.

Defending race winner Enfinger, is currently set to run only a partial schedule with ThorSport this season making a second straight win at Richmond this week all the more crucial.

“We are taking the same truck that we ran there last year – same basic set-up, same tires, so hopefully we can duplicate the result,” Enfinger said. “Obviously things are going to be different with it being a daytime race. I feel like it’s going to be a little bit slicker out there with hopefully a little bit of sunshine on Saturday. I’m looking forward to it.”