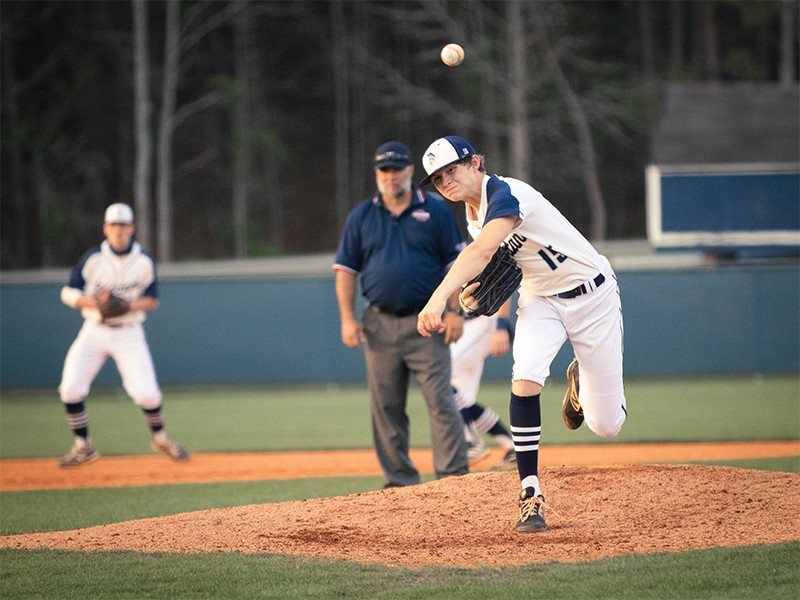 OAKWOOD — West Hall moved into second place in Region 7-3A with a come-from-behind, 6-4 win over White County on Wednesday at Spartans Field.

The loss dropped the Warriors (15-7, 10-4 Region 7-3A) into third place while West Hall (18-6, 11-3 Region 7-3A) moved a game ahead in the standings. The two teams will close out their series on Friday in Cleveland, weather permitting, with the winner gaining the all-important head-to-head tiebreaker.

The Spartans trailed 2-0 in the first inning after White County plated a pair of two-out runs on a single by Dylan Sargent.

West Hall grabbed a 4-2 lead in the third on a bases loaded walk and a three-run double from Michael Gaddy. White County tied the game in the top of the fifth scoring two runs on a Spartans error.

But in the bottom of the fifth the Spartans answered back as Justin Schaffer knocked in two runs on a one-out single for a 6-4 lead.

The No. 1-ranked Titans unleashed a 14-hit attack against a pair of Jefferson pitchers in evening the two teams' key Region 8-4A series in Bogart.

Dragons' hurlers Landon Richards and Jake Walker both were touched for six runs in three innings each.

The Titans led 3-0 before Jefferson got on the board in the top of the third on a solo home run by Bowman Horn. It was 4-1 after the third when North Oconee exploded for six runs in the fourth, as they sent 11 men to the plate getting a pair of two-RBI doubles from David Wiley and Cale Stricklin and capped by a two-run home run from Braden Smith.

Horn finished with two hits and Cole Watkins and J.J. Rapp each had one hit and one RBI for the Dragons.

CHESTATEE 6-6,
HABERSHAM CENTRAL 3-4
The War Eagles used a four-run fourth inning to break open a scoreless game en route to a win in Game 2 of a doubleheader to sweep the Raiders in non-region action in Mt. Airy.

In the big inning, Nathan Bull singled in one run and Bryan Cantrell drove in two runs to highlight the inning.

Levi Stowers pitched four innings allowing one run on three hits for Chestatee (13-11) to get the win.

The Raiders (7-17) cut it to 4-1 in the bottom of the third but Chestatee extended its lead to 6-1 in the sixth. Habersham plated two runs in the sixth and one in the seventh and got the tying runs on base but Nolan Turner struck out Trevor Stevens to end the game.

Turner finished with three hits to lead the Chestatee offense. Cantrell had two hits and two RBI and Hunter Fouche and Bull had one hit apiece for the War Eagles, who have won four straight.