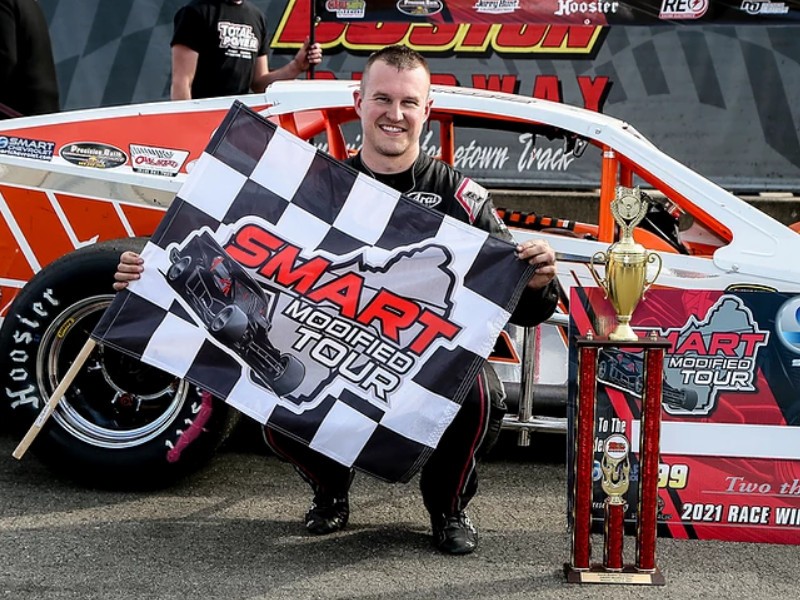 Preece, who is also a veteran modified racer, got the advantage on the last restart and pulled away from his challengers. He crossed the finish line .473 second ahead of Hossfeld to earn his second Modified win of the season in his fifth start.

“We had a really good racecar,” Preece pointed out. “This is probably the best this car has ever been. It wasn’t easy. The 17 (Hossfeld) was real fast.

“Burt (Myers) was real fast. There were a lot of cars that I ended up having to race throughout the race. We made the right adjustments on the pit stop. We were able to get the lead and control it from there out.”

Preece who drives the No. 37 JTG-Daugherty entry in the NASCAR Cup Series, led all but eight laps of the 99-lap race that was slowed by nine caution flags and one red flag. He led the first 49 laps, passed Hossfeld for the top spot on lap 58, and led the rest of the race.

NASCAR Hall Of Famer Bobby Labonte finished 17th in the 23-car field after being sidelined in one of the many mishaps in the race.

SMART Modified Tour driver Tim Bown was injured in an incident that occurred near the mid-point of the race, and was extricated from his vehicle. He was alert at the time and was treated at a local hospital for non-life-threatening injuries.

Trey Crews could not have had a better start to his 2021 racing season.

Peyton Sellers, who swept the track’s season-opening twinbill, finished third with Chris Denny in fourth and Blake Stallings in fifth.

Josh Dawson took the lead from Jared Dawson with five laps to go to take the win in the 15-lap Budweiser Hornets Division race.

The race marked the second straight event in which the Dawsons took home a 1-2 finish.