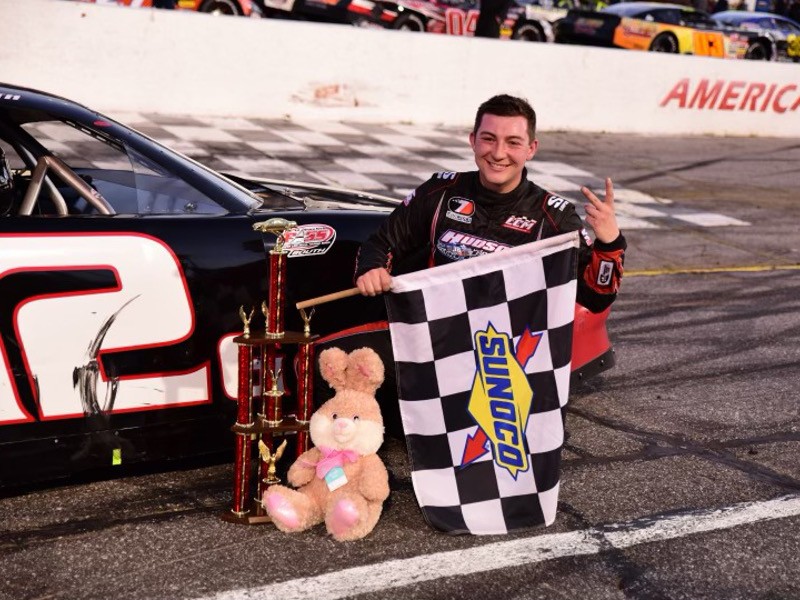 On Friday night, the Hudson, New Hampshire driver took the lead on lap 28, and led the rest of the way for the win.

“I can’t thank my guys enough, this thing was a rocket ship from the start,” said Griffith. “I’m just so happy, we’ve started the season off strong. D.J. (Shaw) made me work for it. He did a better job of saving his stuff and made it hard on me at the end.”

After just edging out Shaw in qualifying, Griffith started the 150-lap race in fifth while Carson Hocevar moved to the pole. Hocevar jumped out to the lead over Shaw at the start, but Griffith was wasting no time as he made his way toward the front. By lap 20 Griffith was in second and just eight laps later moved around Hocevar for the lead.

Through it all, Griffith continued to maintain a slight lead over Shaw. Griffith’s biggest challenge from Shaw came after a restart with 20 laps to go. The two battled side-by-side for several laps before Griffith finally separated himself from Shaw in turn one. Griffith led the rest of the way to take the win over Shaw in second, with Mike Hopkins in third, Travis Stearns in fourth, and Joey Polewarczyk, Jr. in fifth.

“They definitely made me work harder for it tonight, I knew Joey (Polewarcyzk) was on rails and he would be tough to beat,” said Griffith. “I was trying to save my stuff a little, better than I did last night, and bide my time but Joey was tough, and luckily I had enough at the end.”

Griffith started the 150-lap race in fourth after having the fastest lap in qualifying and like Friday night, Carson Hocevar jumped out to the lead from the pole position. But, by lap 17, Polewarcyzk had reeled in Hocevar to take the lead. Hocevar’s night would end shortly after when his car came to a stop on lap 59 with engine problems.

On the restart, Griffith would get the advantage from the outside of row one to take the lead away from Polewarcyzk for the first time. They ran nose-to-tail for the next several laps, joined by D.J. Shaw and Mike Hopkins. On lap 97, Polewarcyzk challenged Griffith for the lead in turn one, but in turn three Shaw would poke the nose of his Ford to the inside of Polewarcyzk. The two made contact, causing Shaw to spin and bring out the second caution of the race.

Following a backstretch spin by Jeremy Miller on lap 112, Polewarcyzk was able to wrestle the lead away from Griffith. The hardest crash of the night waved just two laps later when Evan Hallstrom broke something in the rear end of his car entering turn three. Hallstrom spun and collected Trevor Sanborn, while Ben Rowe slammed hard into the outside wall as he tried to avoid the spinning cars.

On the restart, Griffith powered back by Polewarcyzk and would never look back. Griffith led the rest of the way to take the win over Polewarcyzk, with Hopkins, Shaw, and Jake Matheson rounding out the top five